Opportunities like the AC1 Sentinel's return to Australia don't come every day. Since its discovery and subsequent relocation to the Australian Armour & Artillery Museum in Cairns, Australia, much has been done to ensure that the tank is restored to a pristine condition.

The process has been lengthy and ardous, but at long last, the recovery and restoration works are finally complete. To formally announce its proud return as a dignified museum exhibit amongst other venerable tanks, journalists and media personalities from all over Asia and Australia were invited to participate in the event on 23rd March 2016.

Here follows a recollection of the day's events... 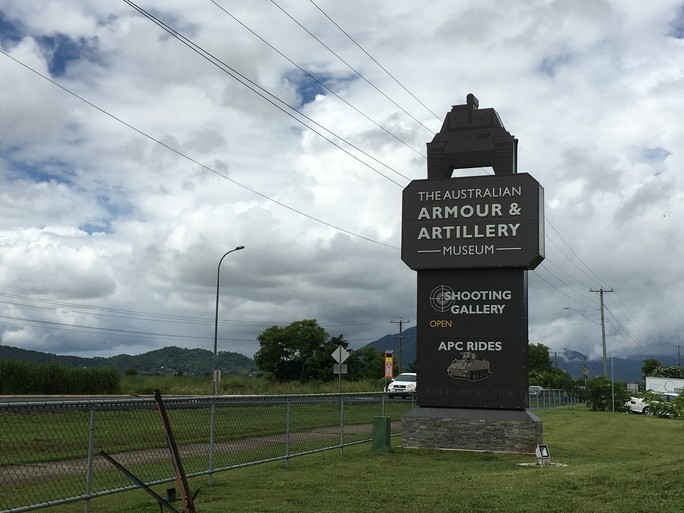 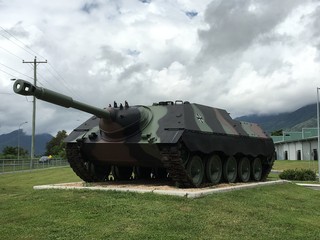 The day began with warm cloudy skies above the city of Cairns. Even though the sun was obscured from view, there was enough daylight to illuminate the museum grounds and its outdoor exhibits - a Kanonenjagdpanzer being one of them.

It was pleasant enough to linger outside, but there was work to do and little time to waste. The Wargaming team proceeded straight inside the building and got to work setting up - the local news stations in Cairns would be arriving soon for their interviews, and the international media would be coming by later in the afternoon.

Opened in 2014, the Australian Armour and Artillery Museum features over 100 exhibits, most of which are military vehicles built during the 19th and 20th centuries. It would be easy to lose a few hours just viewing them all, but only one particular exhibit stood out for everyone that morning: the newly-acquired AC1 Sentinel. 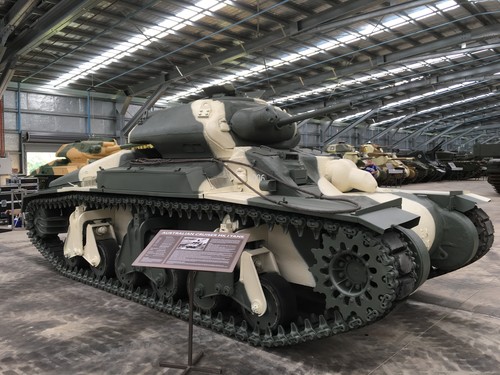 The Australian Cruiser Mk. I (AC1) "Sentinel" tank was designed in Australia during World War II, and was the first tank to be built with a hull cast as a single piece. About 66 Sentinels were produced in total, but only three AC1 Sentinel tanks remain now.

This particular Sentinel tank occupied a space in the center of the main hall as it stood immaculate and gleaming with its radiant camouflage scheme. Originally belonging in the private collection of the late Jacques Littlefield (well-known tank enthusiast and founder of the Military Vehicle Technology Foundation), this Sentinel tank was obtained and transported to this museum with Wargaming's assistance, then partially restored to make it suitable as a static exhibit. 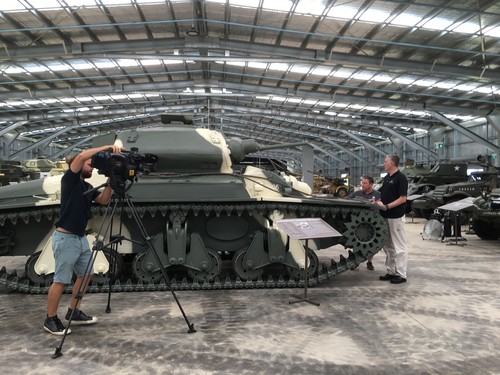 The representatives from the news and radio stations in Cairns arrived shortly after we did, and wasted no time in setting up and starting their interviews with Aliaksandr Bobko and Nicholas Moran, who played a huge part in making the Sentinel exhibit a success. Questions were asked about the Sentinel such as how it was brought from the USA to Australia, the restoration works done and why this museum in Cairns above others.

Unsurprisingly, both interviewees had much to say about the AC1 Sentinel: 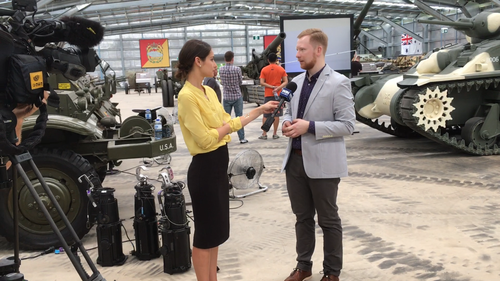 "[The AC1 Sentinel Project] is very unique... there are only three such tanks left in the world, which makes it incredibly rare. World War II history means a great deal to Wargaming, as our games are based on historical objects such as tank blueprints and surviving examples.

With hundreds of vehicles reproduced using these sources, our players can get to experience a truly authentic piece of history." 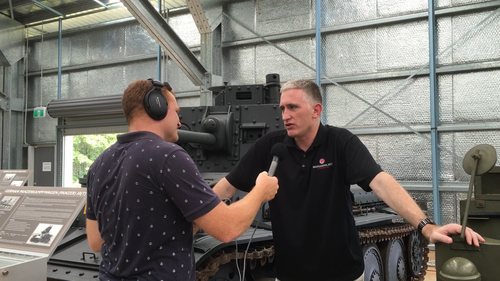 "One of the privileges about this job is being able to present lesser-known histories to people who wouldn't otherwise know of them... A lot of people don't realise that Australia made tanks. So the fact that we can bring this back - it's a great opportunity for this museum to put it on public display. With a world class collection that's just going to get bigger and better, there's no better place for the AC1 Sentinel to be."

The Assistant Manager of the Australian Armor and Artillery Museum, Jason Belgrave, was also interviewed, who spoke briefly about the long-standing cooperation between the museum and Wargaming: 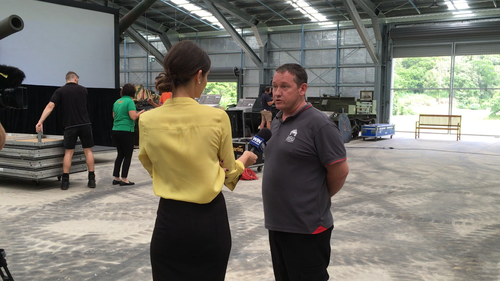 "Wargaming initially contacted us back in 2015, and expressed an interest in bringing the [AC1 Sentinel] back to Australia, specifically to the Australian Armour and Artillery Museum. A few phone calls and e-mails were exchanged as the plans were put in place, and so the tank eventually arrived here in Cairns.

To have two Sentinels here in the museum is just unbelievable. There's only so few left in the world, and now we have two of them (the other being the AC4 Sentinel)."

Satisfied with what they’ve extracted, the news presenters took one last photo before packing up their things and bidding us goodbye, hurrying back to their respective offices for the upcoming Sentinel piece. 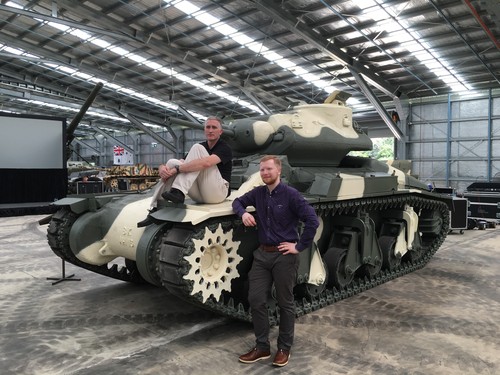 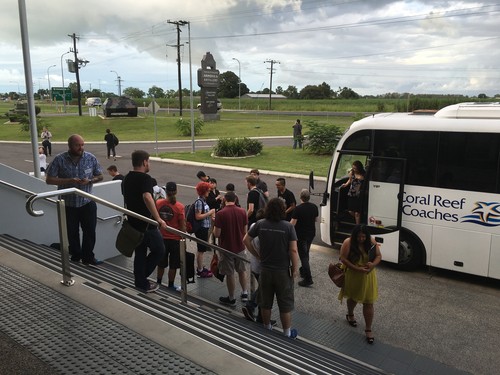 Shortly after five in the afternoon, a tour bus pulled up at the entrance of the museum; the Press Group had arrived. Comprising of journalists and personalities from numerous publications all over Asia and Australia, they were guests invited specially to view the newly-restored AC1 Sentinel in person and be treated to the premiere of the accompanying documentary. 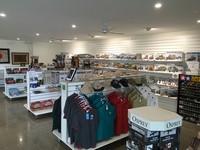 Aside from the usual receptionist's desk (incidentally constructed with the hull frame of an unknown tank), every visitor who passes the entrance of the museum is greeted with the wondrous sight of the gift shop directly to the right.

Although modest, the shop's contents may well be worth its weight in gold to any tank fanatic; rows and rows of tank model kits, t-shirts with fearsome illustrations of popular tanks, books and encyclopedias (about tanks, obviously), and other miscellaneous gifts related to armoured vehicles. 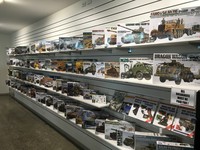 It would be perfectly understandable if one were to head home straight away after purchasing a bounty of books and model kits, but that would be missing the point of the museum... and that point is incredibly huge indeed.

Just right beyond the gift shop lies a treasure trove of military vehicles waiting to be explored. Armoured cars, Halftracks, SPGs, tanks and more besides, to describe them all would take a seperate article on its own. Instead, have a look at this image gallery to see some new and familiar vehicles. 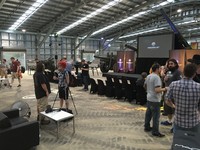 The guests were gradually ushered to the clearing surrounding the AC1 Sentinel, where a temporary stage and rows of seats were now set up for use. Other improvements were also made; a strobe light illuminated the tank itself as high-octane rock music blared from the speakers.

As soon as the guests were seated, the programme began, first with a formal greeting by Jem Loh, Head of Marketing for Wargaming Asia.

It gives me great honour to work on projects like these, simply because we have such amazing support from our players and community, especially from Australia. This is an important day for [Wargaming], as we now have the opportunity to pay tribute through this special labour of love."

Aliaksandr Bobko was next on the stage, who delivered the opening speech for the event. 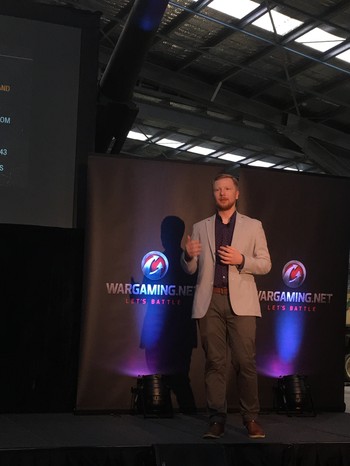 Wargaming is actively working with museums around the world to ensure that the history of World War II is preserved for future generations, and with the AC1 Sentinel project, the Australian Armour and Artillery Museum is now one of them.

With his speech finished, Aliaksandr stepped off the stage, and the documentary began to play. Weighing in at just over 10 minutes, the documentary tracks the journey of the AC1 Sentinel from its previous site at the Littlefield Collection at Texas, USA, to the Australian Armour and Artillery Museum in Cairns, Australia. 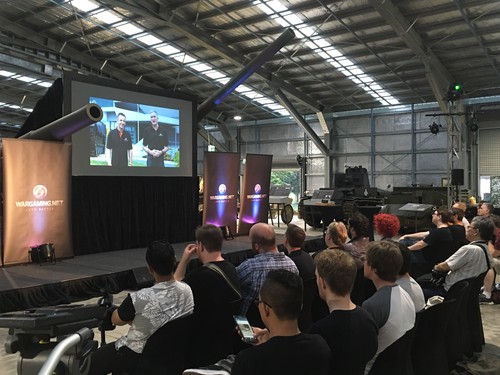 Scenes depicting the lengthy transportation and restoration process were accompanied by interviews of the numerous people who made it happen, and rounded off with insightful comments about the AC1 Sentinel’s combat capabilities by none other than Wargaming military historians Nicholas Moran and Richard Cutland, both known to their fans as the Chieftain and the Challenger respectively.

Note: The full documentary will be available to watch for free soon. In the meantime, have a look at the trailer below:

Once the documentary ended, the group were allowed to disperse and mingle amongst themselves. Most, if not all of them had interviews lined up with Wargaming representatives, and they waited patiently for their turn by indulging in a free flow of beverages and light bites available, trying out the Google Cardboard demos located to the side and exploring more of the museum itself. 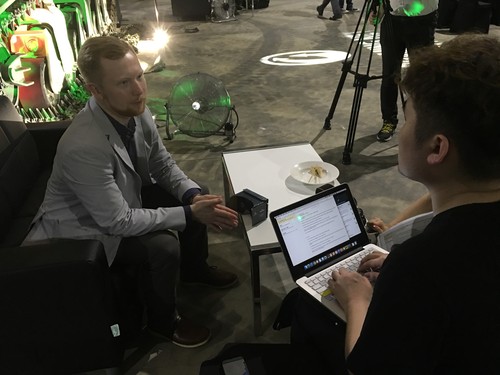 The event lasted late into the night until the last interview questions were answered. The intimate setting of the museum – with the graceful frame of the AC1 Sentinel serving as the appropriate backdrop – ensured that everyone there shared a great experience by witnessing the return of one of Australia’s engineering achievements. 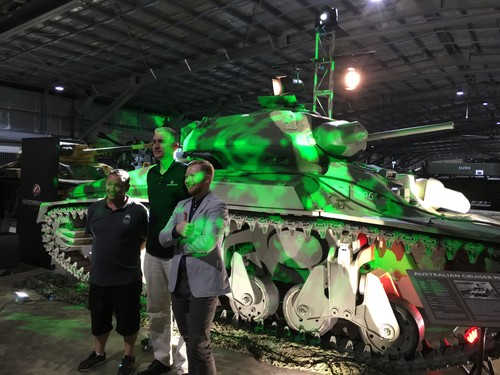 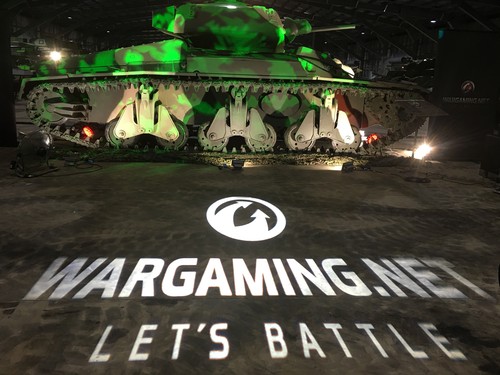