Round Two of the #ANZPL is done and dusted, and what a round it was! As will be standard for each upcoming Wednesday, we’ve compiled a highlight from each match up as well as a recount of all the action to catch you up to speed if you’ve missed out!

What an incredible debut match for the Archers. After sitting out for Round One as the Bye team, the Archers came out swinging with a decisive two games on their home map to start the series. The pressure was on for the Action X to play for the draw on Ruinberg but some incredible decisive plays by Del and Celestia in their Bat Chat 25ts sealed the deal for the Action X, leading the Archers to a 4:0 blow out for their debut, and incredible display and making their impact known on the ANZPL.

Two titans of the ANZPL met face to face for Round Two of the ANZPL. Matches were hotly contested and both teams were evenly matched, it was going to take some ambitious and out of the box plays to come away with the win. One such play was a rush lead by the Sentinels on Mines, with Zanin and Helping leading the charge as meatshields with Rowendy and Rainbow behind pushing aggressively into the Matildas spawn. Unfortunately for the Sentinels, the push was held off by some smart flanking by Saxon, and the subsequent games went one a piece to end the series in a 2:2 Draw.

The only two teams to come away with a win last week faced off to end Round Two in style. It was an incredibly well contested series, with both teams playing incredibly well, with forced mistakes on either side leading to the inevitable win or loss for each match. The Comets held incredibly well on Mines holding off a strong flank by Ravvi and Lightning due to some solid plays by Ravioli, Speed and Acachi. However once Murovanka rolled around, the Bulldogs were unstoppable, and finished the series with a 3:1 Win.

Each week one of our ANZ CC’s will be giving it their all and casting one of the game’s most intense moments, this week features Assassin_Gaelic covering an intense set of matches from the Comets v Bulldogs Games! Give it a look and be on the look out for more of our CC's covering the ANZPL in more detail! 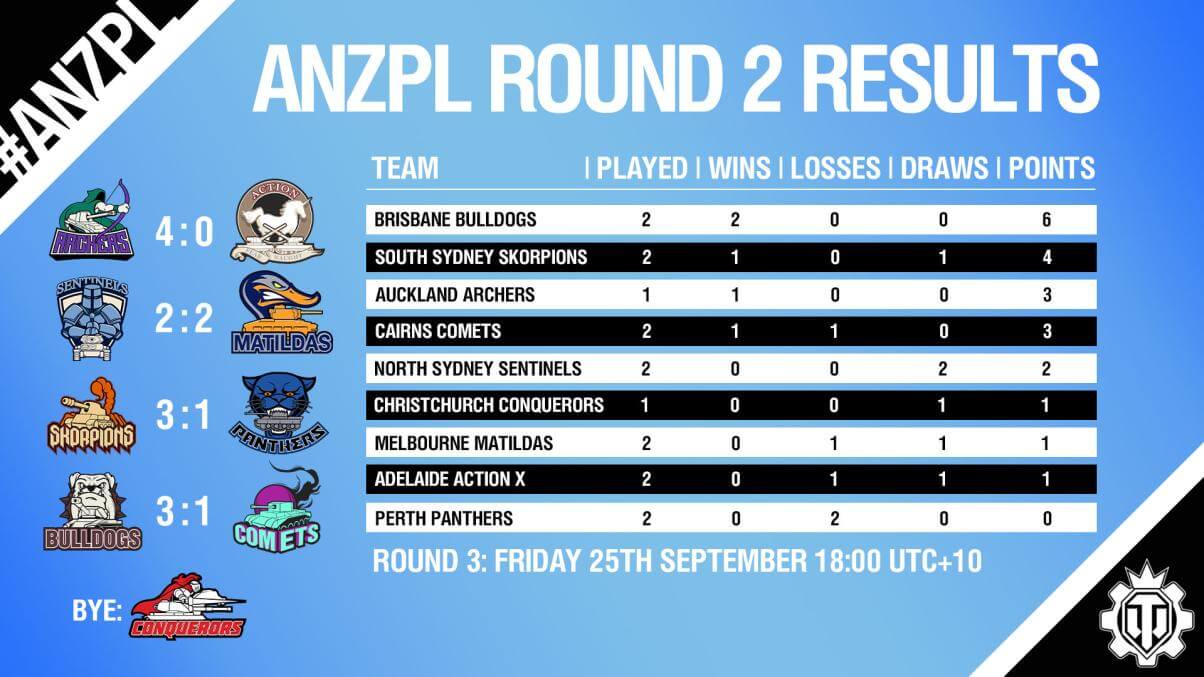 The Bulldogs are holding strong in the lead with two impressive wins under their belt but closely followed by the Skorpions. Only a point’s difference stands between the middle of the board, so it’s still well within anyone's means to completely take the ANZPL by surprise. The Archers with their debut match have stolen third place, but how long will they be able to hold it, or will they knock the Skorpions or Bulldogs down a peg?

Here are the matches for this Friday, starting at 6PM UTC+10 over at our World of Tanks ANZ Twitch Channel! Hosted by Kevin “KaRath” Zhu and Jordan “Elfish” Mays.