The regular season of the #ANZPL is done and what a season it was! We now have our four playoff teams confirmed and ready to battle it out for ultimate supremacy. Here’s a recap of all the action from last Friday to keep you up to date and get you ready for the Finals!

The Comets played a clean first game on Himmelsdorf with RavioliAldente in the Maus baiting twin 50 B’s Kyle and Trax into a brawl on the two flag while Dark and acachispirit sprung a trap knocking out conehead23. Slayer was then caught in a crossfire with CJayKing managing to deal out a whopping 5K of damage in the T57 Heavy by the end of the game. Game two swung back in the Conquerors favour with acachispirit getting caught out in the open and quickly removed early on in the game thanks to a great setup from the Conquerors. The rest of the Comets were then quickly mopped up soon after. Games three and four saw more back and forth with the Comets narrowly taking the win in game three and then the Conquerors nabbing game four despite Kyle managing to get his tank stuck on a cliff!

Match two was a playoff decider for the Archers and Skorpions. Skorpion's game plan was on point, reading rotations perfectly, utilising great map control and knowing when to strike and when to take one for the team. Game two was closer but when push came to shove the Archers’ 50 Bs were too slow to get into the fight and it cost them the win. Game three on cliffs saw a nice little play from Skorpions with Napalmer and The_AuzziGamer rushing 13bladez, isolating him and knocking him out. Skorpions then went on to take map control, denying twoplustwo in the Strv 103B shots for the reset. Game three was over in a hot minute with the Skorpions immediately taking map control and things quickly falling apart for the Archers seeing the Skorpions walking away with a 4:0 win.

Match three saw the Bulldogs first defeat of the season at the hands of Action X on double ups of Sand River. Game one was close with both sides putting up a good fight. Action X looked to be at the HP disadvantage in the first half but cjhunt and BlackBlood in CS-63s evened out the score, swooping in on Ironguard and taking him out. The second half turned into a game of cat and mouse as both sides traded blows with Action X coming out on top. Game two ended in disaster for Bulldogs as Action X set up perfectly to counter their push, forcing Ironguard's Kranvagn into a crossfire and crushing the push from Ravvi and Soldat_Udachi’s STB-1s. The Bulldogs struck back to claim victory in game three rotating their Bat-Chats to flank Action X’s pushes but at the end of the day it wasn’t enough to keep their undefeated streak going. Game four was a cakewalk for Action X confidently defending and walking the Bulldogs into a crossfire without losing a single tank of their own.

Finally we have the match that had everyone talking. In what could possibly be the biggest upset of the ANZPL thus far, the Matildas beat the Panthers, denying them a spot in the playoffs. The Panthers were quick to put the pressure on flag two on Prokhorovka and force the Matildas into making a play. SaxonOrrick stepped up, absolutely flying into the cap to get the reset. From there the Matildas were able to get their tanks back into the right positions and get the crossfire working with great focus fire at the end from arty_noob who narrowly avoided death in the STB-1 and DG_ToasteD in the Super Conqueror. The Panthers were able to win game two with some excellent focus fire as well as JS setting up on the red line in the Strv 103B, farming the Matilda's health. It all fell apart in game three though when Silent received a damaged gun and ammo rack causing the Matildas to pounce on the opportunity, collapsing on the Panthers with everything they had. The Panthers looked able to hold their own at first but then Tsar_CamagoH joined the party in the Badger and it was all over from there. Matildas were then able to continue their momentum and turn a pivotal draw into their first win of the season. 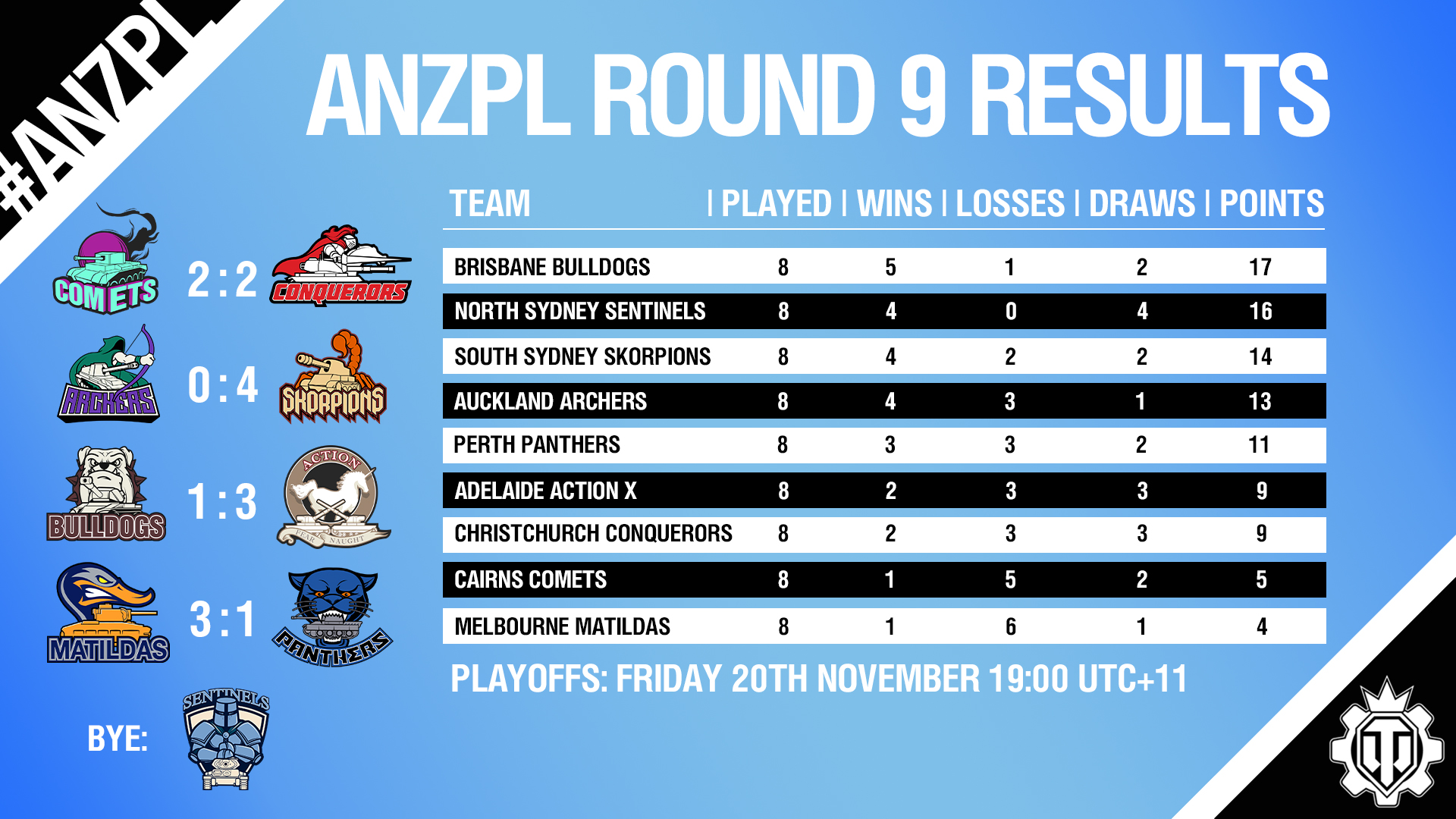 It’s official, Bulldogs, Sentinels, Skorpions and Archers are on their way to the playoffs. Panthers were so close but thanks to a devastating upset from the Matildas they have now lost their spot with Matildas finishing off the season with a redeeming win. Action X as well surprised us all taking out the top team the Bulldogs and bumping themselves up to sixth place above the Conquerors. It’s been an amazing first season and we can’t wait to see what playoffs have in store! For now, there’s a week break to get the teams ready and relaxed for the highly anticipated finals run.

We’ll release an article next week detailing the order of matches, but until then, keep your eye out on the ANZ Third Year Server Anniversary Tournament happening in the ANZPL’s stead this Friday, hosted by six of our CC’s across multiple channels. The tournament is a 3v3 Tier X only, with no reward or wheeled vehicles, with a bunch of gold and some Type 59’s on offer!

The matches will be starting at 8PM AEDT this Friday, and there’s still time to register, with registrations closing at 11:59PM AEDT tonight!

Otherwise sit back, and get warmed up with the Anniversary Tournament before jumping in to the finals next week! #ANZPL LETS BATTLE!