Round Four of the #ANZPL is down, and Round Five is coming in hot this Friday! As we’re at another Wednesday, we’ve compiled a highlight from each match up as well as a recount of all the action to catch you up to speed if you’ve missed out!

Because of Daylight Savings Time, the games will now start at 7:00PM AEDST/UTC+11!

First up however is a show that does what this article does but even better! Each Tuesday at 8:00PM UTC+11 our ANZ CCs put together the best moments, talk about the best play by the players, and analyse next weeks matches in the ANZ Premier League Barracks, your one stop show for everything related to the #ANZPL as apart of our Tanks.TV offerings! Drop by our Twitch Channel to see 9_9_destroyer and FadingNeptune get you up to speed and take the deep drive on everything ANZPL.

The Conquerors came out of the gates swinging against the Matildas, putting on a solid display across all four games. The Matildas did their best to hold strong in game three and put a stop to the win streak of the Conquerors, with an impressive performance from Vale and Toasted. Unfortunately however, they couldn’t stop the well oiled machine that was the Conquerors, with some great play by Pebblez pulling off an incredible game in the TVP in the last game of the series pulling just under 4,000 damage done in the Czech wonder. The Conquerors took the series in a 4:0 sweep.

The Sydney Derby was quite the series to behold. The Sentinels looked absolutely unstoppable for the first two games on the Skorpions home map Ruinberg. The entire Sentinels team put in work, all doing around 2,000 damage in game two, with Rainbow, Rowendy and Syndy putting in work in game one. Unfortunately JT was caught out one too many times and heavily punished at the start of both games on Ruinberg, however there was a spark of hope with JT going up against Zanin in a heart stopping 1 v 1 standoff. Unfortunately for JT, Zanin managed to take the game, and the Skorpions went down to the Sentinels 1:3

The first match on Mines nearly gave everyone a heart attack, with Ice from the Panthers managing to destroy Blaze holding strong in his 60TP with 0.5 seconds left on the clock in a game that no-one saw turning out in such a way. The Panthers managed to win the second game a bit more comfortably, giving them the lead 0:2 at the halfway mark. Himmelsdorf was to follow and the Archers managed to clutch a reverse sweep over the Panthers, with an impressive 3,500 damage game from twoplustwo in the final game, ending the series in a 2:2 draw.

The match that would have catapulted one of these teams to a great spot on the leaderboard, and the result most likely a realisation of this. Both teams fought incredibly hard, and were very evenly matched. Methodical games was the tone of this series, with neither team willing to send it in a risky strategy to try to force a guaranteed win. The Action X were looking for the win at game four, with the 2:1 lead, but an fantastic display by Dark with CJ anchoring the defence in the Strv 103B proved too hard for the Action X to crack, with the Comets pulling back the series in a 2:2 draw. 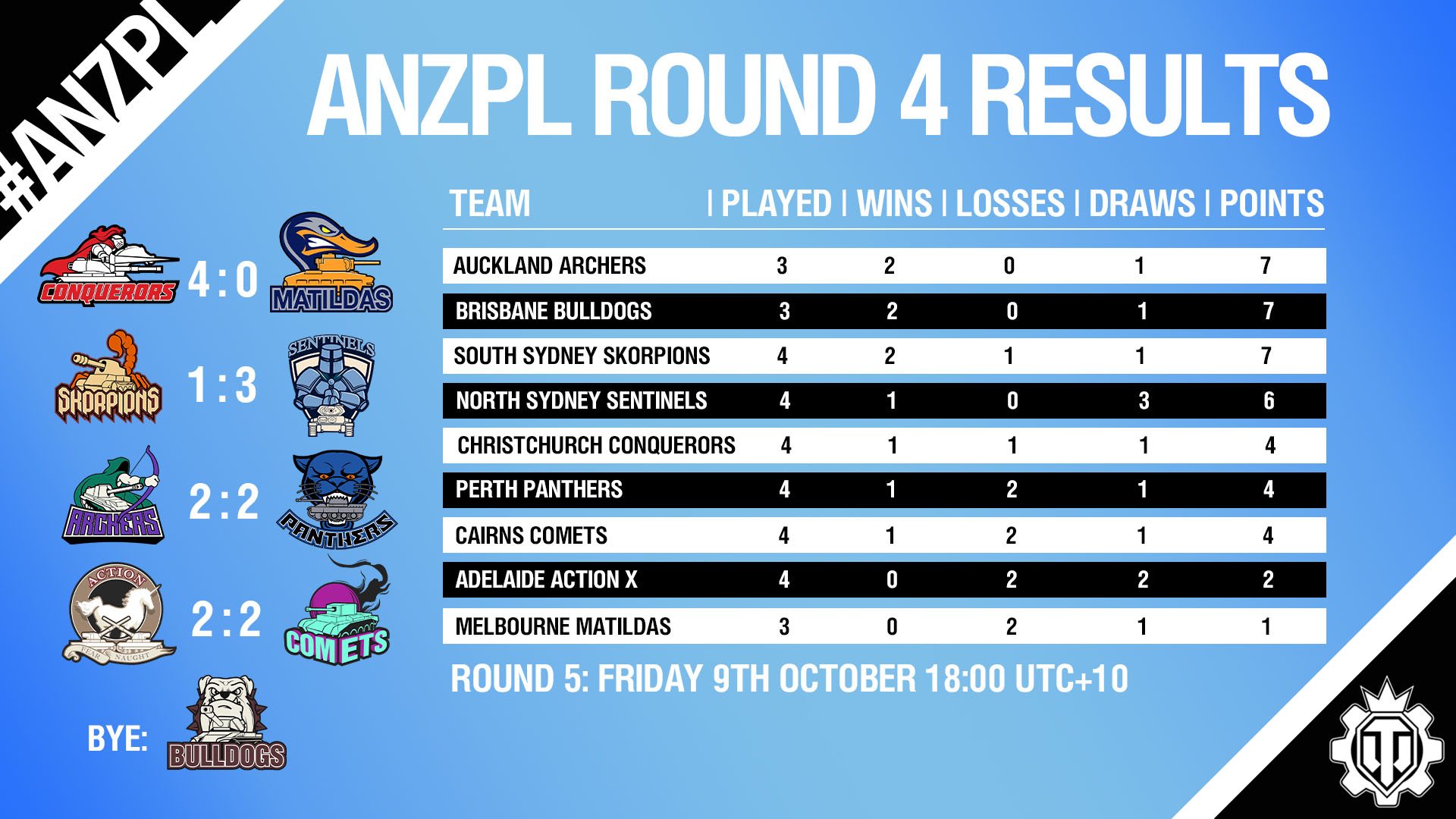 The Archers have rocketed up to the top of the leaderboard, however, they are followed closely by the Bulldogs and the Skorpions, it is still absolutely anyone’s game. The Conquerors, Panthers and Comets all sit one win away from the top spot as well, with the Action X and Matildas going to have to dig deep and show what they’re made of to get the win, with plenty of time to still prove they can. This week will shift the leaderboard around a lot, and it’ll be exciting to see where each team stands after the games have finished.

Here are the matches for this Friday, starting at 7:00PM UTC+11 over at our World of Tanks ANZ Twitch Channel! Hosted by Kevin "KaRath" Zhu and Jordan “Elfish” Mays.

Looking forward to seeing you for week five of the #ANZPL and as always, get your “HYPERX” in chat to win yourself a custom mechanical keyboard with limited, not to be sold, World of Tanks Keycaps (ANZ ONLY). So get your food and drinks, chuck on the #ANZPL and close your week out in World of Tanks esports style.