Round One is done, and the rest of Season Two still lies ahead! As we’re at another Wednesday, we’ve compiled a highlight from each match up as well as a recount of all the action to catch you up to speed if you’ve missed out!

The Conquerors started their attack on Ruinberg strong with a very quick cross, allowing Thake and goober in twin Bat-Chats to catch Saxon off guard and alone. After quickly knocking him out of the battle while taking minimal damage themselves, the pressure was quickly put on the cap as the Matildas tried desperately to get a reset. Although the reset did come through it came at a high HP cost and Conquerors took the first win. In battle two the Matildas once again ended up one tank down early on but managed to pull it all back with some great positioning from Bailes in his Bat-Chat and Whippet racking up 4.4K damage in his Super Conqueror. Moving onto Ghost Town, both teams fought down to the wire with things looking like they could have gone either way in a fantastically exciting battle. In the end, the Conquerors were able to take home the win having just that much of a better set up. The final battle saw our first cap out of the season with the Matildas digging into the cap like ticks and the Conquerors just failing to dig them out.

The Sentinels wasted no time putting pressure on the cap in their first battle attacking on Ruinberg and the Bulldogs fumbled trying to drive them off. AVP and joeattora in 50B’s ending up both being knocked out in a push while failing to trade for any of the Sentinels vehicles. Battle two saw the Sentinels once again getting the better of the Bulldogs as they played aggressively and cohesively to drive the Bulldogs off cap and take the second win. The Bulldogs were able to pick up a win in the third battle on Sand River making a decisive play early on with Dark chasing down Syndy and putting him out of action in the first few minutes. From there it was a death by a thousand cuts for the Sentinels as they struggled to put pressure on the cap with the timer eventually running out and the Bulldogs bring the score to 1:2. The final battle looked as though it was going to go the way of Bulldogs but after things devolved into an all-out brawl the Sentinels were able to claw back a victory to finish 1:3.

The first battle on Cliff got off to a slow start with the Skorpions taking the bottom of the doughnut and the Archers taking the hill. When the push from Archers did come through, things very quickly went from zero to one hundred in an all-out 4 v 4 tank brawl as DeL and JT chased each other around the hill. Unfortunately for the Archers the Skorpions came out on top and secured themselves the first win. Battle two was much better for the Archers with a solid defence as they pulled things back to one apiece before moving onto the next map of Ruinberg. Skorpions played an excellent defence on Ruinberg, with JT and Napalmer denying the Archers cap pressure with consistent resets while the rest of the team were able to take out the two Bat-Chats of DeL and TheReturned to gain another win. The final battle got off to a rocky start for the Archers as they lost the tank advantage after DeL was knocked out in his 50B, but after a bit of back and forth, the Archers were able to whittle the Skorpions down to just Napalmer left on the cap before the timer ran out to walk away with a draw.

The final matchup of the night got off to a flying start with a huge push from the Panthers straight down the one line on Mines where they completely overwhelmed Speed and Eugene with the Action X’s defence quickly falling apart from there. The pace slowed down in battle two as Action X tried to redeem themselves and although the battle was probably closer than they would have liked, they managed to even up the score. If the second battle was a little too close for comfort for Action X the third battle on Ruinberg certainly wasn’t. The Panthers drove straight into a massive crossfire with two 50B’s ready and Eugene hitting eight out of eight shots in the IS-7. In the final battle of the night, things got really down to the wire as Action X looked close to capping out as CJ in the Maus and DONGERLORD in a Bat-Chat dug in on the cap. Forced to make a move, JS pushed the cap in his 50B and although he did get the reset it was all for naught as he was quickly knocked out followed by the rest of the Panthers, ending the night on a 3:1 victory for Action X. 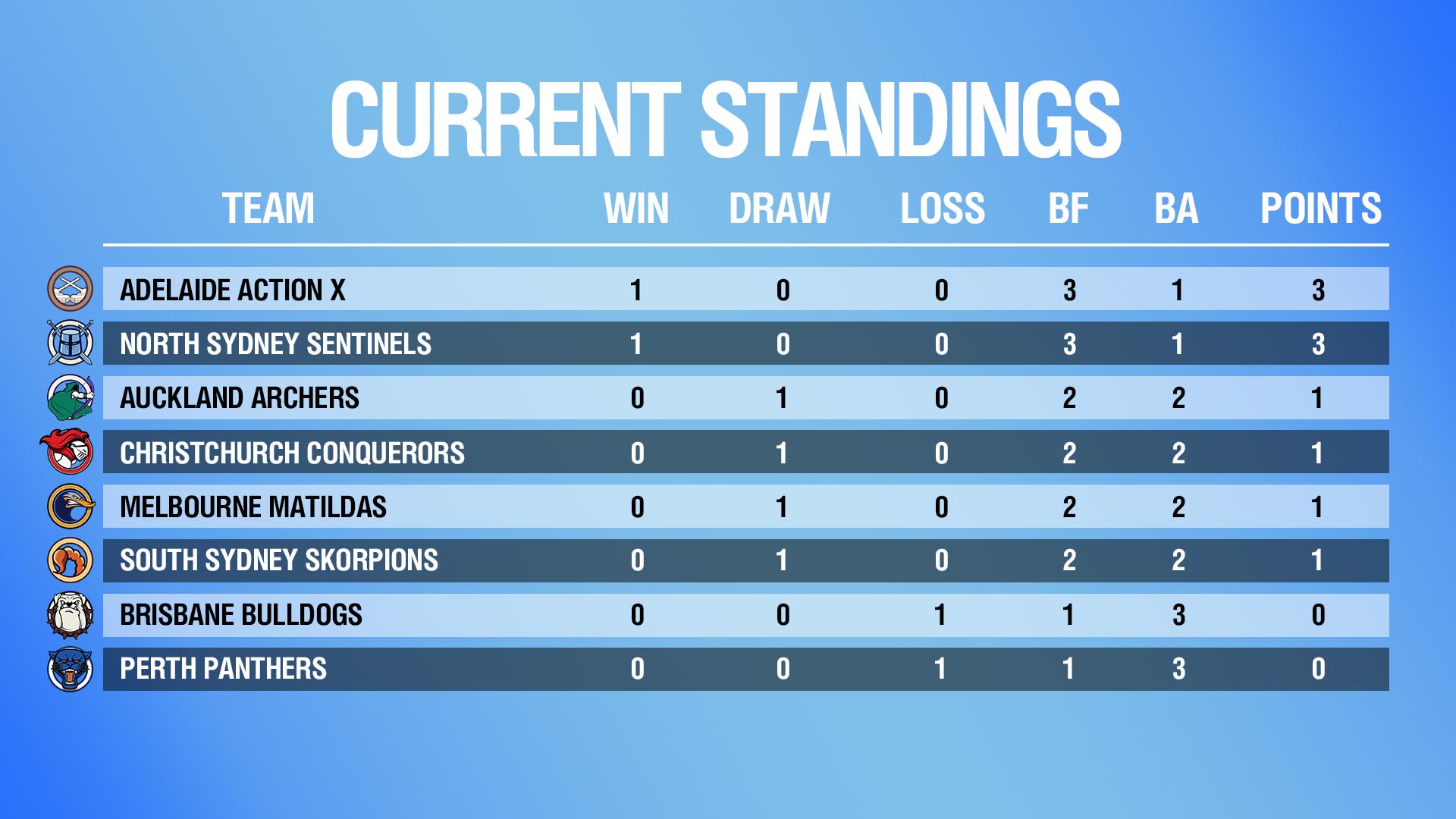 Action X have taken the top spot on the leaderboard, followed closely by the Sentinels. However, it is early days yet and still anyone’s game. The Archers, Conquerors, Matildas and Skorpions all came away with a draw while the Bulldogs and Panthers fall behind with plenty of time to still left to move up the ladder. 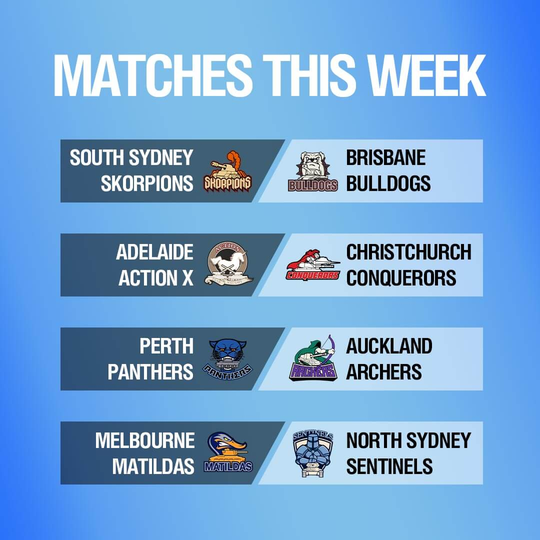 For our avid ANZFL fans, here what was the best performing team of five for Week One led by an insane performance by Dark, followed closely by Thake, Night, Rainbow and Bails. The two substitues of Syndy and CJ also put in an amazing effort, and I'm sure proped up many teams. 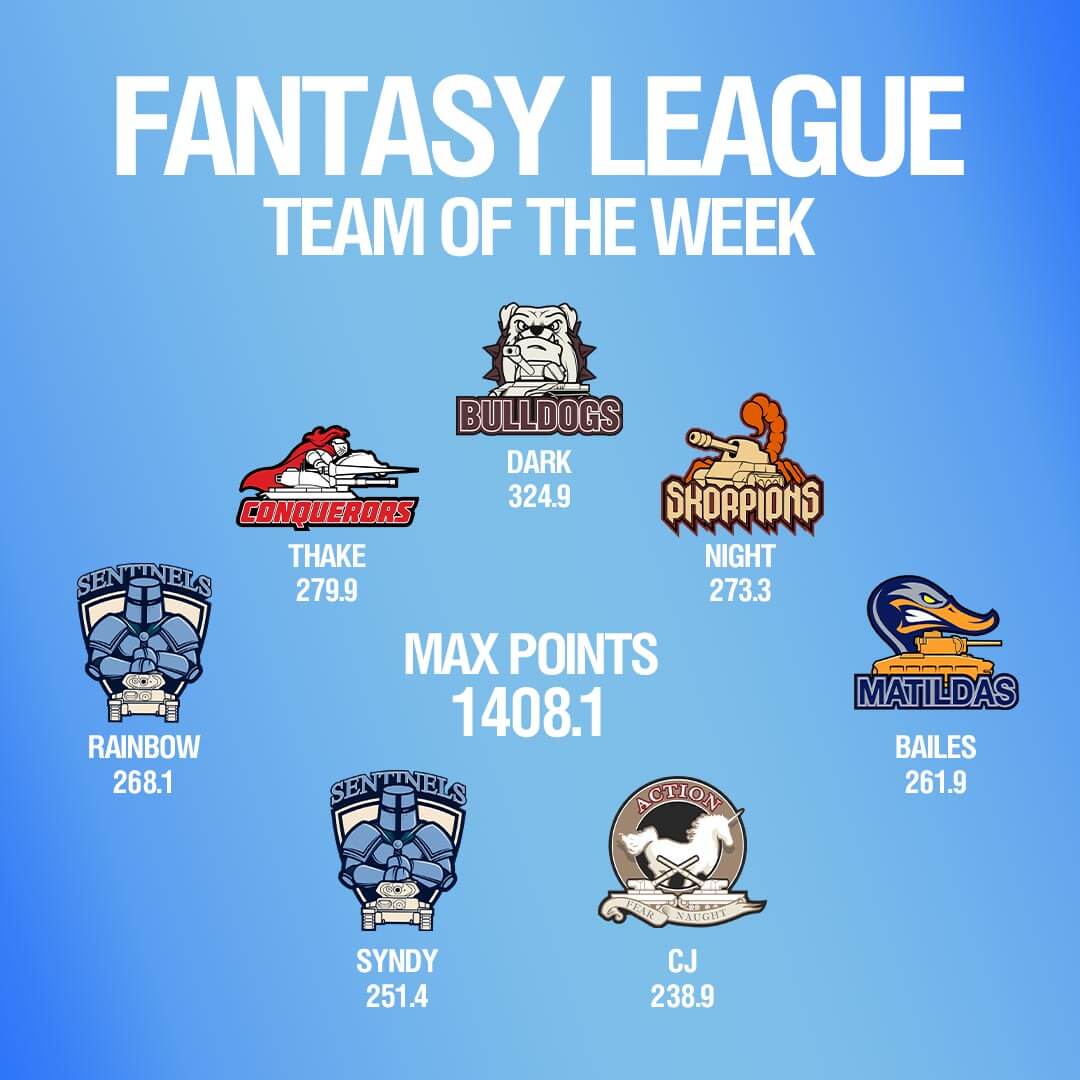 If you would like to participate in the Fantasy League, and win a share of 20,000 and some great prizes from one of our sponsors the Republic of Gamers and HyperX, click the giant button below!