There was a lot on the line for the ANZPL Semi-Finals and we saw some of the most incredible games of both seasons as a result! As usual, we’re here to break down all the action for you with a highlight from each match up as well as a recount of everything that went down to catch you up to speed if you’ve missed out!

The Matildas had a great run this season, remaining undefeated throughout. While the Bulldogs got off to a rough start in their regular season but quickly moved from strength to strength as it progressed, proving themselves to be formidable opponents. Who would come out on top of this Semi-Final bout was anyone's guess.

To start us off the Bulldogs were attacking on Murovanka, a challenge for any ANZPL team. Despite an over commitment from twoplustwo giving the Bulldogs the numbers advantage the Matildas were able to rotate their HP effectively and come out on top of the ensuing brawl to take the win. Matildas started their attacking run by quickly taking control of the one flag, leaving the Bulldogs to make the next move. The reset came at the cost of AVP but was quickly traded for Jordy, before the Bulldogs flanks started to move in and surround the Matildas who were now at a huge HP deficit and started dropping like flies.

The teams then moved onto Ghost Town where the Bulldogs got off to a great start on defense after managing to knock out both Bailes and Whippets Bat-Chats before the Matildas had even put on any cap pressure. Even though the HP was relatively equal, without those play making tanks the Matildas weren’t able to make it work. The Bulldogs let things slip on their attack, getting into a few ill opportune skirmishes where they couldn’t find themselves an advantage and the Matildas seemed to have the overmatch everytime.

To finish things off the teams then went on to Cliff where the Bulldogs got off to a less than ideal start losing Dark for free on a hill climb, but the Bulldogs weren’t about to roll over. After a brief pause the Matildas made their move, pushing around the hill up the nine line to try and eliminate Soldat_Udachi’s 113. However, they were driving straight into a crossfire and were absolutely decimated as a result. The Bulldogs then went all in for their turn on attack, with MadHouse pulling off an epic hill climb in the Rhm. Pzw. to set up the play while Dark made up for the previous round landing shot after shot in the CS-63 ending the game on 3.4K of damage and playing an instrumental role in securing the Bulldogs Grand Finalist spot.

The Sydney derby was up next, a face off that had everyone excited to see what would happen. Both teams had their ups and downs throughout the season but now the pressure was on and it was time to make or break.

Getting started on the attack on Prokhorovka the Skorpions had their work cut out for them, taking some heavy HP loss as both teams maneuvered on either side of the tracks. The turning point came when Napalamer and Auzzi dumped over the tracks in their 277s and took out Wymo, eventually getting the Sentinels down to just Syndy in a full health Super Conqueror while they were all on one shot of HP. A close shave for the Skorpions but a win nonetheless. The second battle was much more one sided for the Skorpions as they easily fended off a Sentinels push down the one and two lines putting themselves up 2-0.

Moving onto Himmelsdorf, the Skorpions maintained their excellent form on defence, finding a two tank advantage after knocking out Syndy and Rainbow’s 50Bs while barely losing any HP in return. The final battle on Himmelsdorf came down to a brawl on the two flag as the entire Sentinels roster pushed in to drive out the Skorpions. The battle was hard fought, but in the end the Sentinels had two tanks still alive for the Skorpions one and there was no way to convert a win before the timer ran out.

The Sentinels pulled finger on Cliff, taking advantage of an over commitment from Napalmer to pounce on the Skorpions in a brawl at the donut. As Russian moved in to support he seemingly missed that Rainbow was there waiting for him and was quickly killed before the flank came across from Syndy to seal the deal. The next battle had everyone on the edge of their seats as the battle came down to an epic duel between JT and Syndy with both tanks on one shot of HP. The two played cat and mouse on top of the hill with neither player wanting to make the first move. However, with JT being on the attack it was up to him to make the play and when he did Syndy was the quicker gun, taking the win for the Sentinels and pushing both teams onto a tie breaker.

The Skorpions now had the unenviable job of attacking on Murovanka, no small challenge for any team in the League. Moving onto the one flag the resets started coming through thick and fast from the Sentinels as JT and Napalmer began to bleed HP. Russian moved in from the flank to take out Syndy but at that stage JT and Napalmer were already dead in a two for one trade that Skorpions simply couldn’t come back from. With that the Sentinels completed their comeback and secured their spot at the ANZPL Grand Final, and the opportunity to defend their title as ANZPL Champions of season one.

Here is the matchup for week nine. We have the battle for third place this Friday 14th as well as a special WeeGees Vs CeeCees exhibition match to get things started! Then the Grand Final, Saturday the 22nd, live from Fortress Melbourne! Register for your tickets to attend but hurry as spaces are limited and filling up fast! 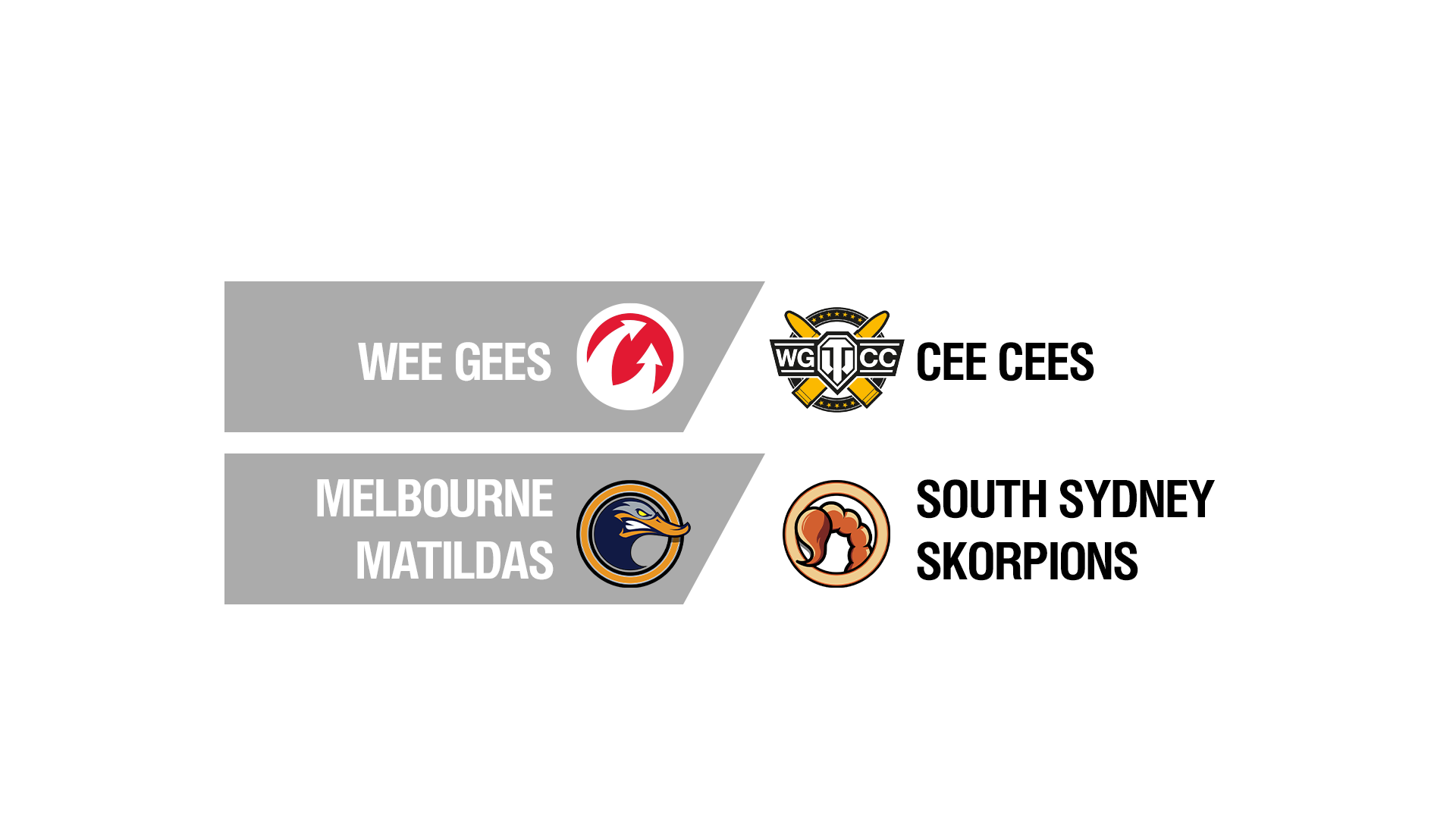 ANZBL is in its second to last this Monday so here is a quick breakdown of the action for all those who missed it!

Both teams went one for one on Ghost Town securing pretty convincing wins on the defense. Comets went for a one flag cap and got to within about six seconds of securing it before the push from Centurions and the reset came through. The Centurions went for a two cap play on their attack but ended up in a five way crossfire, getting soundly beaten with all of Comets tanks still standing.

The teams again went one for one again on Prokhorovka. The Comets made a huge push onto the two cap but the Centurions defense was set up for it and they were quickly put down. The Centurions played their attack a bit too cautiously, bleeding out before they made their move and when they did the brawl wasn’t in their favour.

The first game on Cliff was a nail biter as the Hellcats narrowly scraped through with a win after getting off to a good start punishing a hill climb from Barricade007. The Wolverines came back swinging though, winning in a clean sweep in the next battle without losing a single tank to the Hellcats. Although they did lose one to the hill...