Annnnnnnnnnd we’re back! ANZPL Season Three got off to a cracking start last Friday and as usual, we’re here to break down all the action for you with a highlight from each match up as well as a recount of everything that went down.

This season as part of our weekly wrap-up, we'll be giving you the chance to earn up to a year's supply of coffee thanks to our friends at Ironside! Each week we will be running an ANZPL Hot Shot competition, allowing you to vote on your favourite moments from each week. Each clip in this wrap up is one of the four you can vote on, and there's a link to the voting form at the bottom of the article. Weekly winners will be drawn at random during our ANZPL stream each Friday night to win weekly prizes, then everyone will go into the running for that grand coffee prize at the end of season! Without further adieu, let's get stuck into the matches!

The Auckland Archers got off to a great start last week against fellow Kiwis the Christchurch Conquerors. Starting on Prokhorovka, the Conquerors went for a more aggressive strategy on attack but things quickly fell apart when they walked into a crossfire. Archer's newcomer, Stewy showed some great teamwork, maneuvering himself to block shots onto Celestia and keeping him in the fight. The Archers went for a more cautious approach to their attack, taking control of their side of the train tracks as well as the cap, forcing the Conquerors to come to them. The Archers hold wasn’t so easily broken however and utilising some great positioning were able to walk away with another win after capping the point.

Moving onto Cliff things went from bad to worse for the Conquerors as they yet again found themselves in another crossfire. The Archers set up in mid was far superior and the Conquerors found themselves on the receiving end of the two Vz. 55s of Saffe and Celestia while Trax and Stewy rained down fire from above on the hill. The final game saw a much better performance from the Conquerors although it was still a very tight game. Coming down to a one on one, Bluey was able to get the drop on Celestia to finish up 3:1 for the evening.

The North Sydney Sentinels and Melbourne Matildas put on quite a show for us last week, going all the way to the tie breaker. Starting on Cliff we had a close game with the Sentinels getting off to a good start taking early control of the hill. Despite a brief moment where a push from twoplustwo and MerryTurnipDay looked like it could have swung the balance the victory went to the Sentinels. In Game Two, the Sentinels were a little too eager to take the hill, their boosting speed to get up. This resulted in an instant battle win for Matildas despite Sentinels clearly looking the favorite on their 'home' map of Cliff.

Onto Himmelsdorf where the pace slowed as the Matildas maneuvered to get onto a point, finally settling on the Two Flag. The Sentinels quickly formed up to drive them off, plowing headlong into Bolagnaise and Whippet. Whippet quickly went down leaving Bolagnaise surrounded by the entire Sentinels team who were then able to win the ensuing brawl. The next game was closer as the Matildas pushed through mid, isolating and eliminating Speed. However the Sentinels recovered bringing the game to a one on one between SoyMilk in an E 100 and Bolagnaise in an Obj. 277 who was able to out maneuver SoyMilk and reset the cap.

The tiebreaker took us to mines where the Matildas correctly anticipated the Sentinels strategy of a double Kranvagn push onto mid, getting there first in CS-63s and catching the Sentinels in a devastating crossfire. After finding all the overmatches the Matildas were able to walk away from their first Season 3 match with a win against the current ANZPL champions.

Next up the South Sydney Skorpions and the Perth Panthers faced off on Ghost Town. Starting with a Panthers attack, they put pressure on the Two Flag but weren’t able to make it work with Benny and Auzzie doing an excellent job of getting resets and grinding down their HP. The next game saw the Skorpions employ a well rehearsed strategy, fielding two Bat-Chats to control the outter edges of the map. Despite this things still looked close for the teams. However when the dust settled the Skorpions still had their two Bat-Chats to clutch a victory.

Prokharovka opened with a push from the Panthers down the 1-2 line that was quickly foiled as LightingMan was inexplicably out spotted in a T-100 LT by Night in a 60TP and reduced to a sliver of HP. The final match saw a nice decisive push from Panthers, isolating and eliminating JT. From there the Panthers were able isolate two more Skorpions players, Aussie followed by Benny, and secure a point on the board to end 3:1.

For the final matchup of the night we had the Brisbane Bulldogs and Adelaide Action X. Beginning with Action X attacking on Mines, things took a turn for the worse when a push down the 1 line from CJ and Eugene ended with CJ taking huge damage and Eugene taking an ignite and quickly being knocked out. Game Two saw Eugene getting ignited again is what was fast becoming a trend for Action X. After that, the Bulldogs took their time, slowly bleeding Action X out for a clear 2:0 on their map pick.

Moving onto Tundra we started with yet another ignite, this time onto CJ, putting Action X on the back foot on their attack. MadHouse and Dark then made an excellent Bat-Chat play, retaking the hill from CJ and Shankypants. From there the Bulldogs were able to clean up easily. The final game was a lot closer, coming down to a 2 v 2 finish. The Bulldogs maintained their excellent form and their ignite run, starting one last fire on Eugene to finish up the night.

Early days yet, but Bulldogs, Archers and Skorpions take top spots in week one, followed closely by the Matildas and the Sentinels. Hopefully the Conquerors, Panthers and Action X can find their groove this week and get some points on the board. 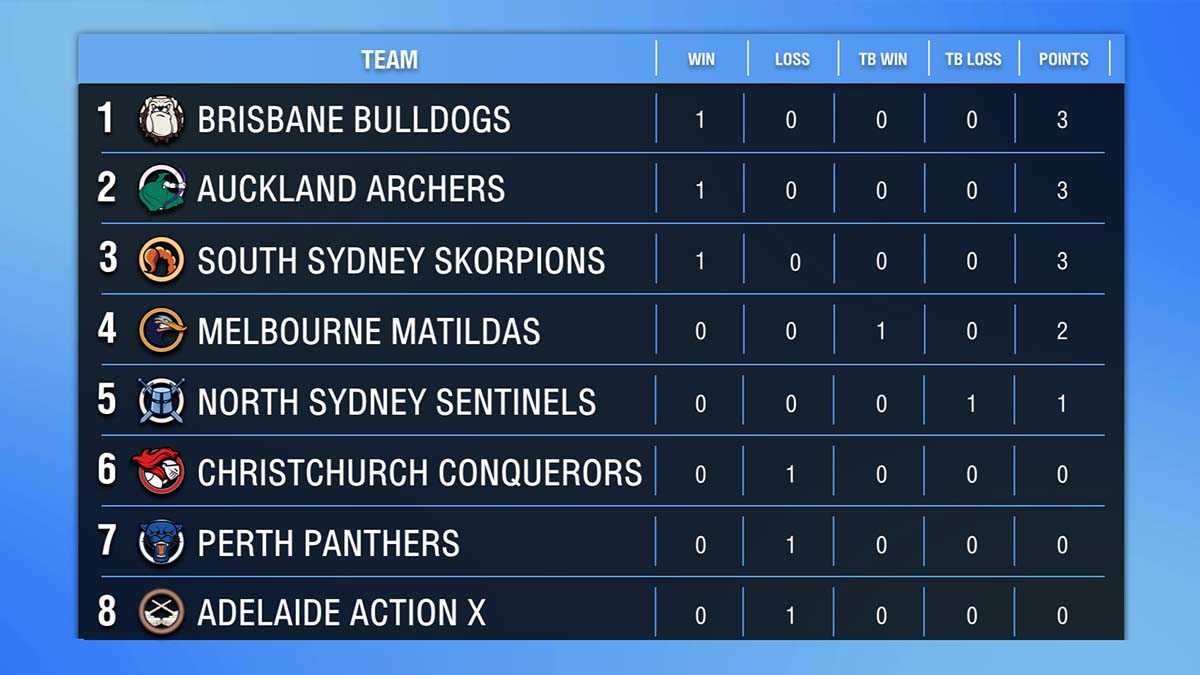 Here are the matches for this Friday the 10th, starting at 6:00 PM UTC+10 over at our World of Tanks ANZ Twitch Channel! Hosted by Ben "SandMan" Green, Kevin “KaRath” Zhu and Jordan “Elfish” Mays. 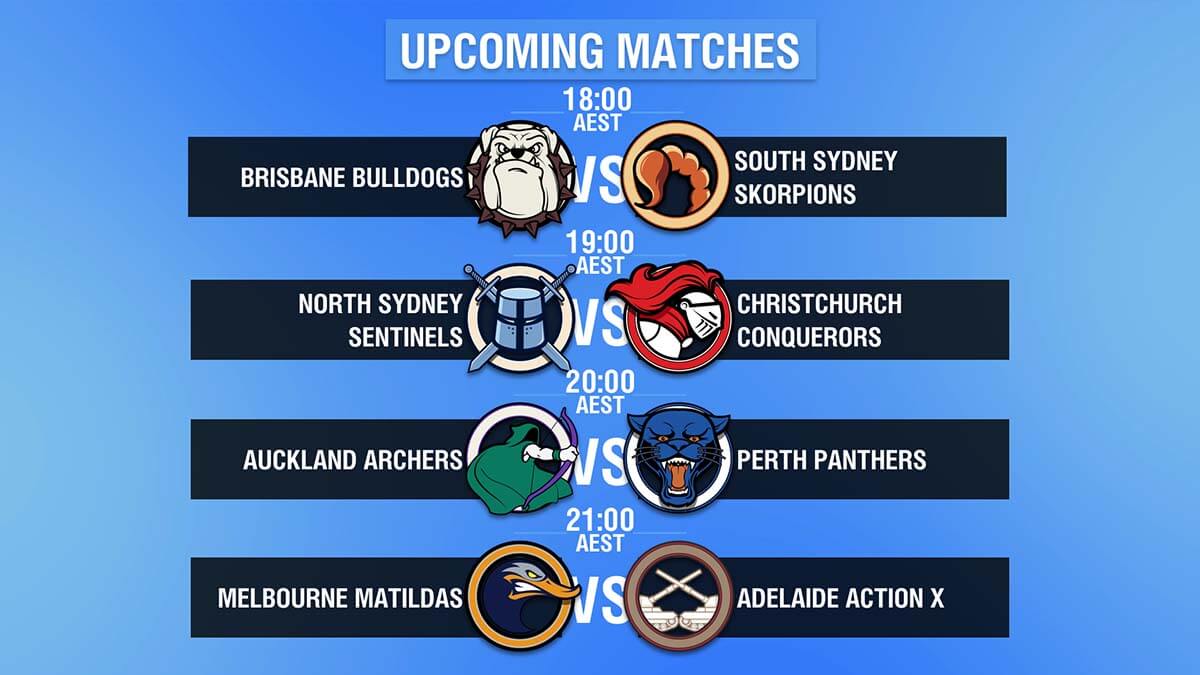 For our avid ANZFL fans, here is what the best performing team of five for week one was. 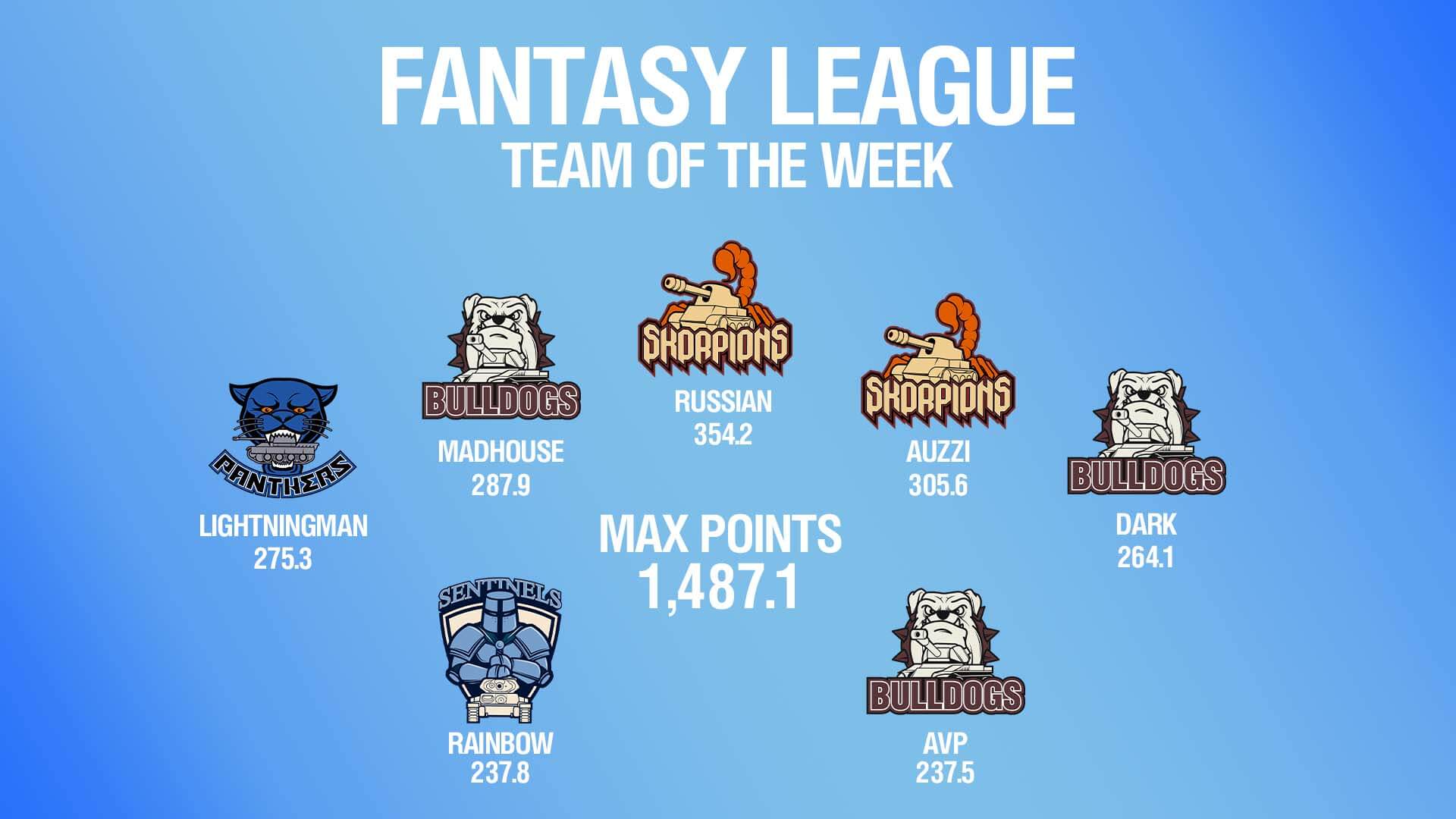 Don't forget to cast your vote on this week's Hot Shot!
Enter your vote!