Commonly known as artillery or “arty” for short, the SPG is a truly unique vehicle class in World of Tanks, and a significant number of World of Tanks fans play them. Coming a long way in their development, SPGs have found their place among existing vehicles starting off as pronounced "damage dealers" that evolved into support machines. Now’s the time to tell you how we want to change their stun parameters based on a long study of statistics and your feedback we’ve accumulated since 2017.

Why Are We Doing This Rebalance? A Retrospective View

In April 2017, we adjusted the artillery settings as part of Update 0.9.18. Since then, World of Tanks has changed significantly but SPGs as a class have remained largely untouched. We've added new branches of vehicles and new nations and reworked elements of the matchmaker. Now we’re finally ready to take the next step and make some adjustments to this unique class. But first, let's look at how artillery has evolved in recent years.

Those of you who played World of Tanks before Update 0.9.18 will remember the significant damage that artillery could cause, thanks to their high alpha. Shells struck you suddenly, and you didn’t have the opportunity to avoid them. This situation concerned the overwhelming majority of vehicles, no matter the armour thickness.

As a result, many players — especially those in heavies and vehicles with low speed — preferred not to take risks. Instead, they remained in locations guaranteed to be safe from artillery fire, which affected the battle dynamics. The probability of receiving high alpha damage didn’t encourage you to take active and useful actions. Plus, at that time arty had some other "charms" that seemed to add fuel to the fire. For example:

But also for those who played on SPGs, it was no picnic. The long reloading time (much longer than other tanks), low accuracy and high dispersion served as a kind of retribution for their excessively high combat effectiveness.

In addition, in order to turn SPGs into effective team players, rather than individual machines, we introduced an entirely new stun mechanic. Now, tanks caught in the arty burst radius had their characteristics temporarily weakened. As a result, an arty’s successful actions on the allied team could bring invaluable benefits and turn the tide of battle.

Changes we made have had different effects on all SPGs, but in general, the number of penetrations decreased significantly. During the rebalancing process, we significantly reduced the nominal damage of HE shells and decreased the average damage caused by arty, both during the battle and with a single shot.

After Update 0.9.18, gameplay for SPGs changed and artillery became a more command-oriented class. The focus when playing SPGs changed from dealing high damage to a specific target to causing damage to a wider number of vehicles. The artillery began to pay more attention to the map sectors, where there were a lot of enemy tanks and where the allies most needed help.

However, the new stun mechanics brought up some new questions. As a result, you have given us feedback regarding the following points:

We want to change this situation. The most significant changes for the upcoming rebalance of artillery affect stun mechanics. Our main goal is to reduce the total stun time, especially after being hit by several SPGs in a row.

Our adjustments will consist of several large blocks. First, we're planning to reduce the duration of the stun from all artillery hits on already stunned vehicles. But let’s quickly take a look at a bit of theory, it will help you better understand the mechanics of the upcoming changes.

How Is the Stun Time Calculated Now?

In summary, both these components (constant and variable) are equal to one (1). Let's consider their ratio on the example of the Object 261. At the moment, this SPG has the following characteristics:

Based on this data, we can calculate the variable amount of stun and its ratio with a constant value:

What Do We Want to Change?

For clarity, let's consider the situation when the Object 261 fires at the IS-7.

2. We will also modify the second component of the stun, which depends on the damage. We will change the distribution of damage from the splash depending on the distance from the tank to the center of the explosion. Now this range is from 0.5 in the center of the splash to 0.15 on the edge. We will reduce the amount of damage at the edge of the splash from 0.15 to 0.05. This will decrease all splash damage, except for cases when a high-explosive shell explodes directly on the armour. And this, in turn, will lead to a slight decrease in the second component of the stun. 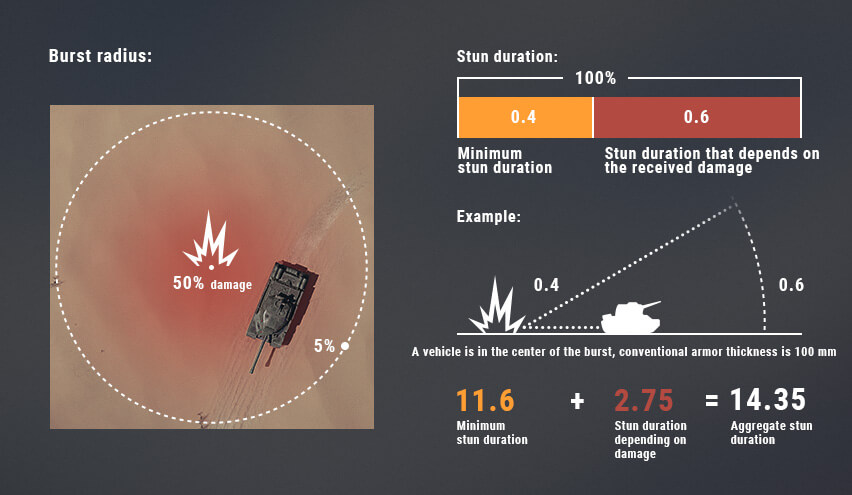 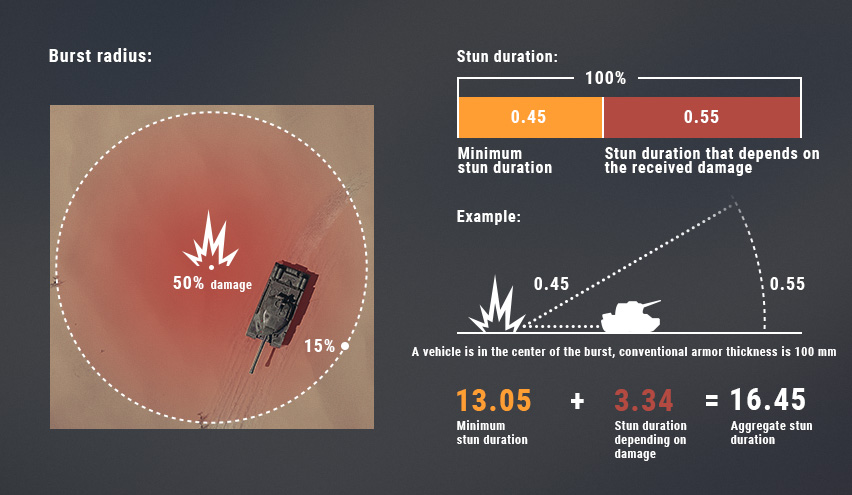 3. If you are already under the effect of being stunned, then any further stun is halved (1/2 stun). To better understand this mechanic, let's take a look at a specific example below.

The first stun is 20 seconds. After 8 seconds, another shell hits your vehicle, adding another 23 seconds. And the total time will be 8 + 23 = 31 seconds. 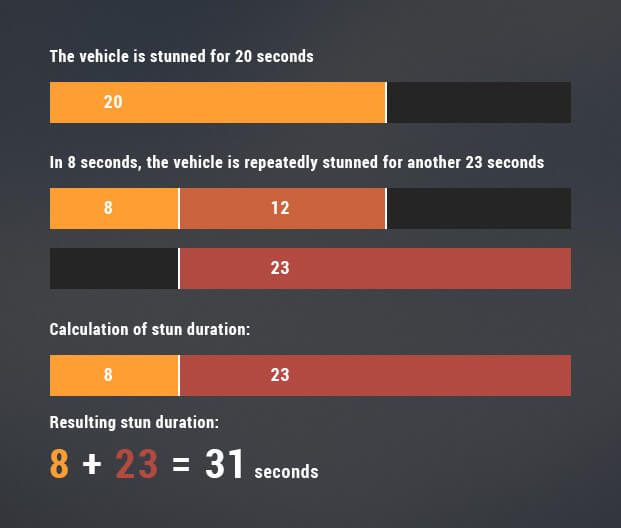 After changing this mechanic, additional stuns will automatically be halved in time. So, the total time stunned will decrease:

The first stun is 20 seconds. After 8 seconds, another shell hits your vehicle, adding another 23 seconds. It is then halved, so the total stun time is 8 + 12 = 20 seconds. 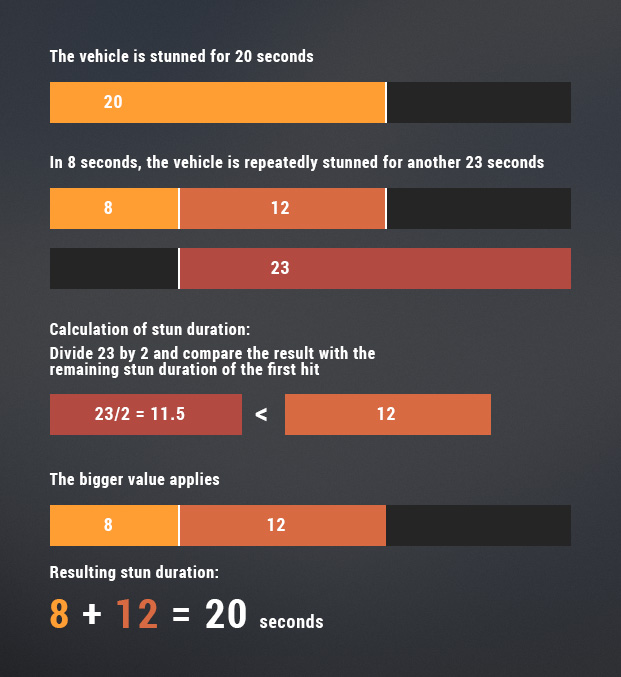 As you can see, the difference between 31 and 20 seconds is significant. During this time, you can change your position, deal damage to opponents, reset the base capture, etc. Thanks to the new mechanic, the stun time from the repeated hit of an SPG will be greatly reduced. There will also be more cases in which the stun timer will not change at all when you are additionally stunned.

If the time of any stun is less than 5 seconds, the stun time will not apply.

Changes In the Characteristics of  SPGs

The changes for each of the points are small, but together they will lead to a significant reduction in the duration of stuns, especially from additional stuns. These changes will affect different SPGs in different ways, depending on the settings of these machines and their current combat effectiveness. That is why we're planning to change the performance characteristics of individual SPGs in order to tune their effectiveness after the announced changes take effect. In particular, we'll reduce the splash radius by 5% for the following machines:

We will also make individual adjustments to the performance characteristics of the following SPGs:

Everything above is just our operational concept of the SPG rebalance. First, we want to test all these changes extensively during supertests. And of course, we want to know your opinion regarding our suggestions. We will continue to work on further rebalancing of SPGs based on the test results and your feedback.