With Week Four of ANZPL Season Four kicking off tomorrow, now is the perfect time to recap all the action from last week's games with highlights from each matchup to bring you up to speed and get you ready for the games ahead!

It seems the Bulldogs finally decided to show up in Week Three, throwing everyone's predictions as they came out swinging against the Skorpions. Game one on Prokhorovka was a close one with the Skorpions getting some good bleed on the attacking Bulldogs to start off, but things went pear-shaped as JT's Strv 103B was charged by Dark's IS-7 and knocked out of the game. From there the Bulldogs traded down to a two on one against Russian's T-100 LT which they then had to find and eliminate before the timer reached zero, managing to do so with just two seconds left to go. Things kept going from bad to worse for the Skorpions, despite picking up an early kill on AVP in game two they bled out hard on their approach and the Bulldogs were quick to return the favour and knock out Benny. The Skorpions seemed to be at a bit of a loss for what to do from here as they focused on trying to trade as effectively as they could but the Bulldogs had the HP and positioning advantage with Cows managing to farm up a whopping 7K of damage by the end of the game.

Moving onto Ghost Town, things looked to be going pretty well for the Skorpions as Russian got the better of MadHouse in the Bat-Chat brawl on the outskirts of the map. Unfortunately for the Skorpions, Russian wasn't able to finish MadHouse off and they were now facing a four on three overmatch in the town. Eventually, it all came down to Russian against three one-shot Bulldogs but a poorly timed reload meant he wasn't able to do anything as Bulldogs sat on the two cap and the Bulldogs went up 0:3. In their final match of the series, the Bulldogs looked as though they were on their way to a 0:4 win after finding yet another overmatch on the Skorpions and bring things to a one on two with Soldat and MadHouse against JT. JT had clearly had enough though and pulled through with a pretty incredible clutch to put at least one point on the board for the Skorpions by the night's end.

It was a night of upsets last Friday and the Sentinels v Conquerors was no exception. Starting on Cliff the Conquerors wasted no time proving themselves to be a force to be reckoned with this season, making the call to take an early fight with Sentinels at the doughnut while TheReturned was off on the other side of the map. The game was over in minutes with the Conquerors absolutely wiping the floor with the Sentinels before TheReturned could even make it into the fight. Game two was closer as the teams traded Whippet for Syndy straight out of the gate but Whippet seemed to be able to output more damage before going down giving the Conquerors a slight HP advantage and the high ground at the doughnut. Things were still tight but in the blink of an eye DeL and TheReturned were now joining Syndy in the garage and the Sentinels were three tanks down facing four relatively healthy Conquerors and it was game over from there.

Next up was Ghost Town and things didn't improve for the Sentinels, losing TheReturned's Super Conqueror in the first minute and a half of the match. The Sentinels managed to bring things to a three on three after taking advantage of the Conquerors' autoloaders all being on reload but now had the challenge of facing those autoloaders with only their heavy tanks left and they narrowly lost out against the Conqueror's superior manoeuvrability and damage output. The last game was another hard slog for the Sentinels as they bleed out heavily on their push to the two flag and KritaKil was able to find and eliminate DeL in the Bat-Chat. The Sentinels then tried to gang up on an isolated Joeattora next to the cap but Whippet appeared out of nowhere on their flank in a Foch B, unloading his entire clip into their sides and sealing the deal for the Conquerors to finish with the first 0:4 victory of the season.

Lastly, it was Action X's turn to shake things up as they stifled the Panther's attacking run on Cliff, leaving them with little recourse as they bleed their HP and boxed them into a corner to finish them off without losing a single vehicle of their own. The next game was a bit more entertaining as the Panthers pushed over mid to isolate and destroy Saxon and Eugene, however once over the other side of mid they were stuck in a crossfire and any gains they had secured from the push were quickly lost. Eventually, it was all up to goober in a TVP any try as he did to stay alive it was just a matter of time before DONGERLORD or Val caught him and brought things to an end.

On Himmelsdorf the Panthers faired better, doing a great job of isolating Action X's tanks and ganging up on them to dig them out. Saxon was first to go followed by DONGERLORD, securing them a two-tank advantage over Action X who had completely miss read the Panthers' movements. From there it was just a matter of mopping up what was left of Action X and the possibility of a tiebreaker was now on the table for the Panthers. However, the tiebreaker never came to be. In game four Action X was able to spot out goober from the hill and DONGERLORD rained down shots with his 50 B getting him down to a one-shot straight off the bat. Action X then charged down the hill, finishing off goober leaving only LightningMan standing between them and the two flag while the rest of the Panthers scrambled to rotate back to meet them. There was really nothing the Panthers could do now as their remaining tanks arrived in the fight one by one and were quickly dispatched leaving Action X to finish the night with their first win of the season.

For our avid ANZFL fans, here is the best performing team of five for week one with a maximum of 2,936 points based on a starting lineup of five. Don't forget to create your team for tomorrow's games! 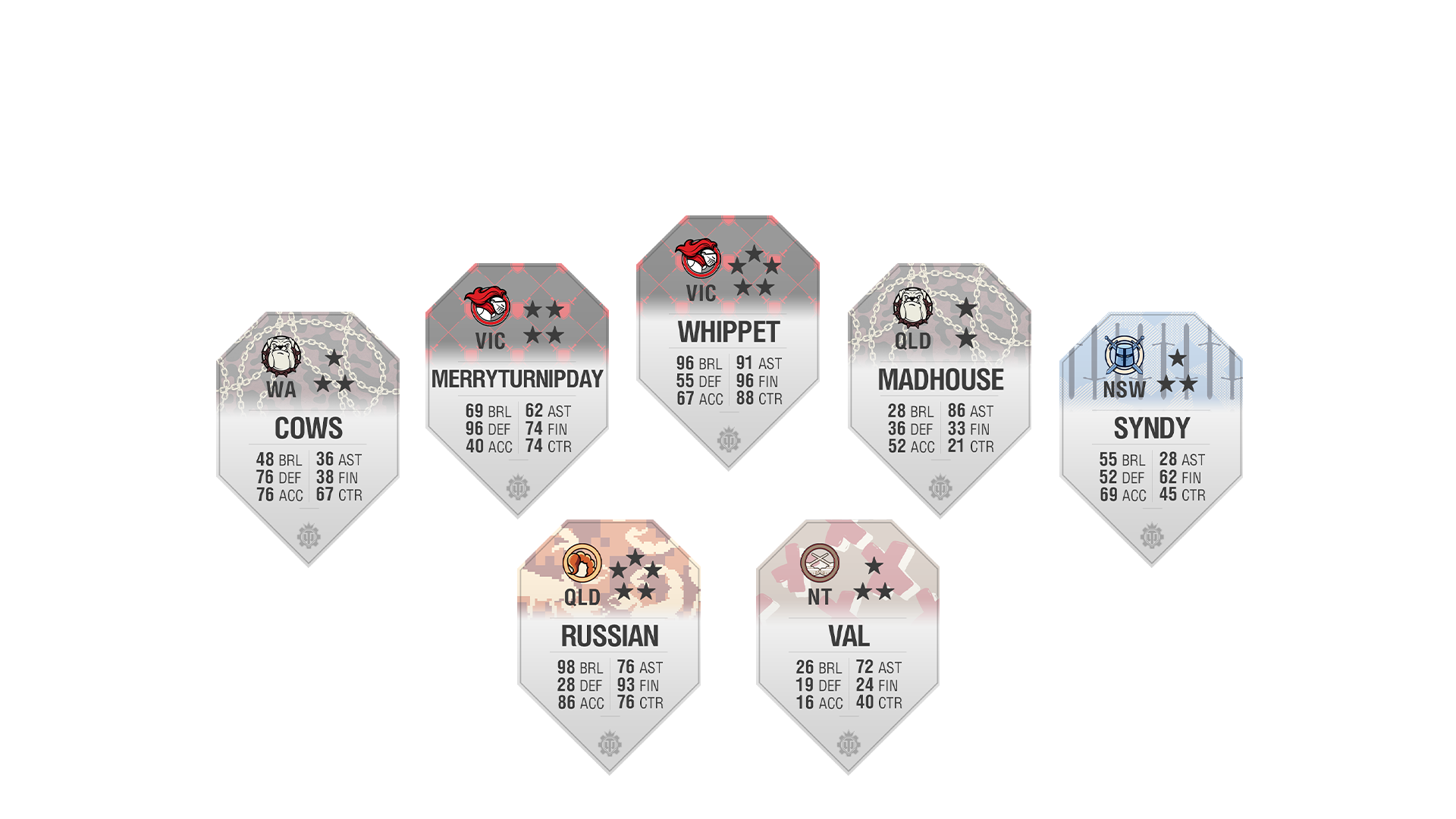 Tomorrow's matches will see the Skorpions up against the Bulldogs followed by the Sentinels facing off against the Conquerors and lastly Action X going head to head with the Panthers.

The Conquerors shot up to first place last week while Action X claimed their first win to place them second along with the Bulldogs who follow close behind in third. It's still early days however and who knows what tomorrow's leaderboard will look like as the teams seem more evenly matched than ever.