Last Friday was Week One of ANZPL Season 4 and with Week Two just around the corner, now's the perfect time to recap what went down. Let’s break down all the action from last week's games with a clip from each matchup to bring you up to speed and get you ready for the games ahead!

Starting on Himmelsdorf, things looked as if they could have gone either way as simultaneous brawls broke out north and south of the one flag. The teams traded kills down to a one v one between Val’s Obj. 268/4 and Napalmer’s IS-4 which Val got the better of. Action X’s attack looked to be going badly as JT and Raspberry were able to ambush Saxon south of the courtyard but they didn’t seem to execute well enough, ending in a one for one trade after Raspberry went down to an ignition. As this was happening, Napalmer found himself alone against Val and Zanin’s Vz. 55s and things suddenly looked very dire for the Skorpions. When the dust had settled Action X found themselves in a very favourable four v two and claimed a second victory on Himmelsdorf.

Moving onto mines the next game was over in a hot minute as both teams went for a full rush straight to middle. It was a battle of CS-63s with the Skorpions coming out on top and Auzzi able to come away unscathed to help finish off the rest of Action X. Game two of Mines was a change of pace as the teams waited to see who was going to make the first move. In the end it was the Skorpions who opted to go for the push, making the read that one of Action X’s CS-63s was on the one line and seeing they had the overmatch. It seemed to pay off as the Skorpions come away with a landslide victory taking things to a tiebreaker.

The tiebreaker took place on Tundra with Action X on the attack, but things got off to a poor start as JT and Auzzi were able to isolate and eliminate Zanin’s Vz. 55. The onus was now on Action X to make a move but with a tank down and time not on their side, things were looking grim and the Skorpions walked away with the series win.

Starting again on Himmelsdorf the Panthers made a bold initial play to rush an isolated Kritakil, but took a little too long to knock him out and the rest of the Conquerors showed up to squeeze the Panthers in a pincer move. From there it was up to the Panthers to play catch up and get LightningMan and goober into the fight. Eventually things came down to a two v two, but with goober’s Bat-Chat on reload JS was all alone and the Conquerors narrowly came away with the win. Game two was a more decisive match for the Conquerors as they were able to coordinate beautifully to isolate first LightningMan and then JS. However, JS was able to stay alive much longer than he should have, giving the Panthers a chance to equalise the score but things didn’t quite pan out as goober and Twit struggled in a three v two.

Next up was Prokhorovka where the Panthers were able to start turning things around, using their lighter lineup to get the better information, take map control and pick up an early kill on an isolated Trax. After that, LightningMan set up his T-100 LT on the two flag forcing the Conquerors to make peeks for a reset and punishing them when they did. Eventually the Conquerors were forced into a full push and the Panthers sealed the deal. Game four saw Whippet introducing the unique strategy of bringing a Bat-Chat with no ammunition. Needless to say, it didn’t work out well for him. Despite this, the Conquerors put up a good fight, managing to put some pressure on the two flag and setting up to block across the tracks. However, LightningMan got set up on the hill behind them in his T-100 LT with free reign to get resets without being spotted himself. This forced the Conquerors to once again make a losing push over the tracks and the series went to a tiebreaker.

Another Tundra tiebreaker and the Panthers played excellently on the attack, getting a decisive first kill onto Kritakil’s Kranvagn. With three of the remaining Conquerors now bottled up by JS in mid, whippet attempted to break the deadlock by flanking in his Bat-Chat but was caught out by LightningMan’s STB-1 and taken down to a one shot of HP. From there things were all but in the bag for the Perth Panthers.

Lastly we had the Bulldogs v the Sentinels starting on Tundra where the Bulldogs allowed a Sentinels one flag cap to go just seconds from finishing before Dark was able to reset. However in the process they lost a huge chunk of HP as well as Ravvi’s in the 113. From there things were looking pretty comfortable for Sentinels and they were able to finish off the match without losing a vehicle. Game two played out in a similar fashion, this time with the Bulldogs going for a two flag cap and punishing the Sentinels with a two for one trade on their re push with some greatest focus fire. A much nicer result for the Bulldogs map pick.

For the next map of the series we moved onto Himmelsdorf where Sentinels seemed a little uncoordinated on their attack, walking into a crossfire and losing DeL and TheReturned for nothing. The rest of the Sentinels went down without much of a fight and the Bulldogs got away with an easy win without losing a single tank themselves. The next game saw the Bulldogs making a grouped push up the eight line while MadHouse snuck around back in his Bat-Chat. It wasn’t looking like too bad of a push to begin with but after bypassing Wym0 and focusing on doodletank2 the Bulldogs found themselves surrounded with little recourse and with that we went to the third and final tiebreaker of the night.

The Bulldogs narrowly lost out on a win in the tiebreaker after sitting MadHouse near the one flag to spot any cap from the Sentinels so that the rest of the Bulldogs could take the bottom half of the map. But the Sentinels pulled a fast one on them, finding MadHouse and eliminating him before putting three tanks on the cap. By the time the Bulldogs reacted and got into position to reset, they were out of time and the Sentinels eked out the win for the series.

For our avid ANZFL fans, here is the best performing team of five for week one. If you haven't already, it's not too late to get started in our ANZPL Fantasy League! It's free to play and there are heaps of great prizes up for grabs! 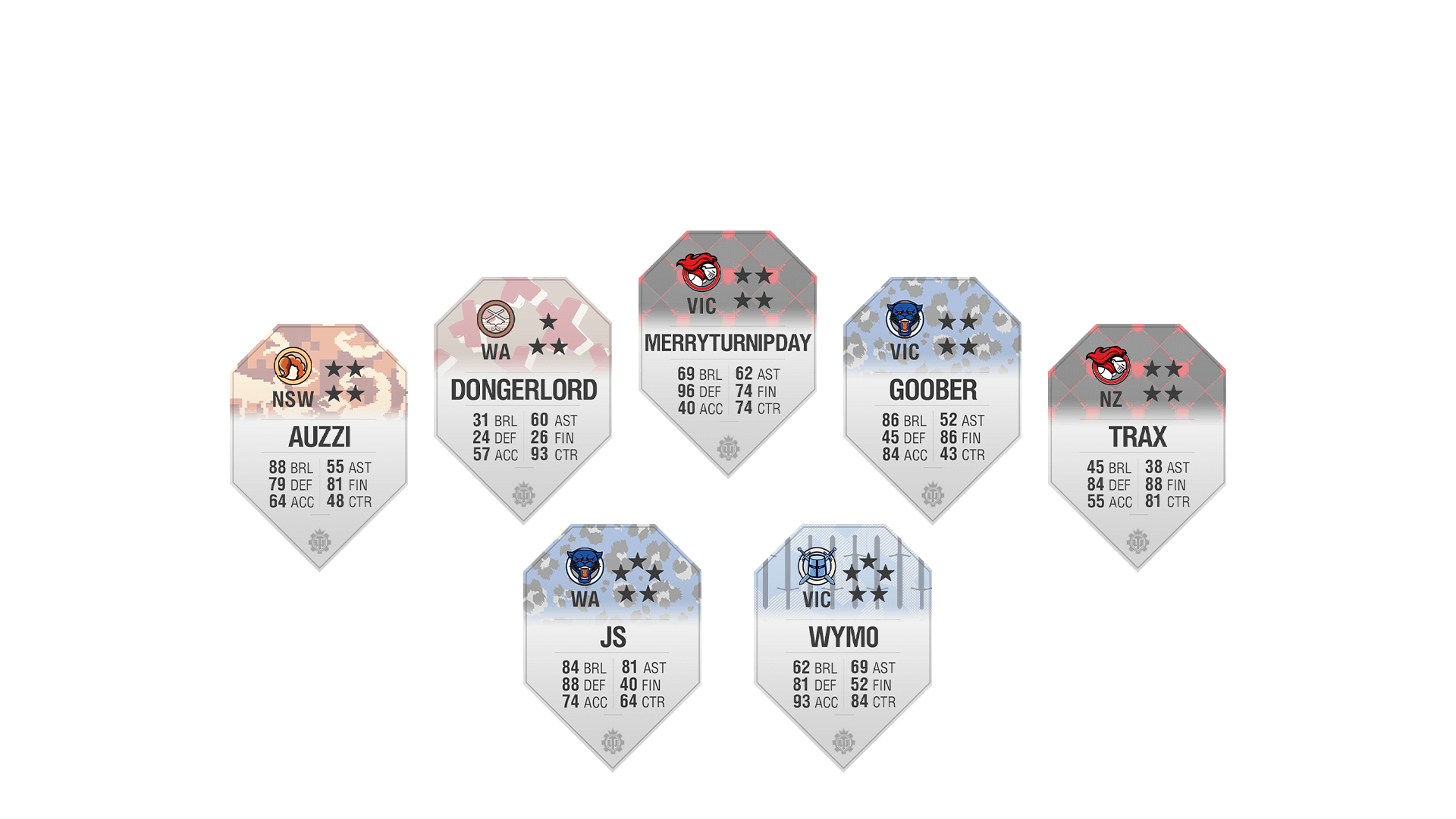 After three tiebreaks in the first week the Skorpions land on top of the board followed closely by the Panthers and the Sentinels. It’ll be up to the Bulldogs, Conquerors and Action X to step up or see the divide grow even further moving into next week. 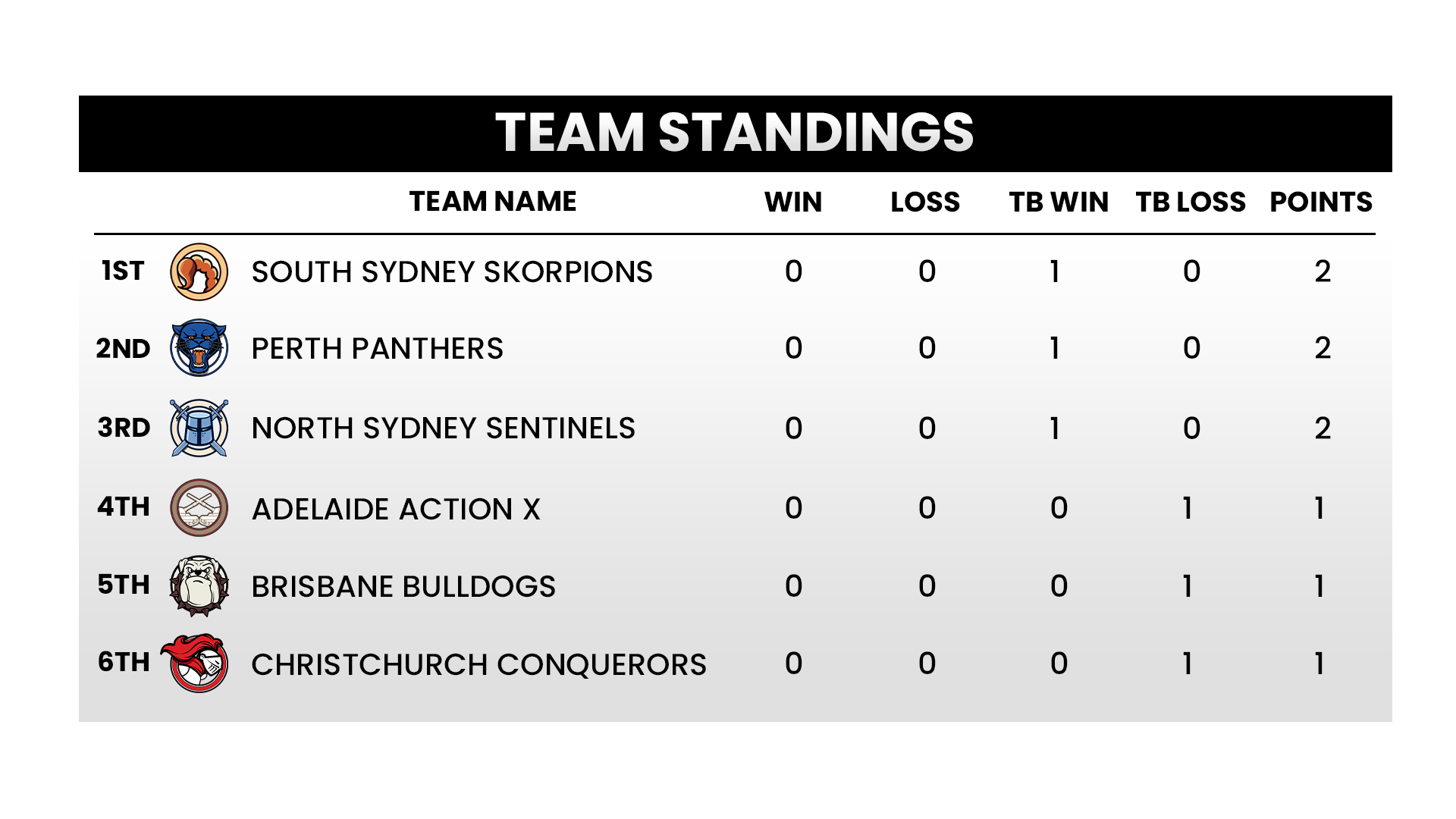