With Week Four done and dusted, let's settle in to a long weekend, recap the frantic action that occurred last week, and see if any team stands on top as we approach the halfway mark of the regular season!

To start things off for the night, we headed over to the rolling plains on Prokhorovka, where the Action X elected to bring an interesting light tank pick in the Manticore during Game 1, to try and gain control of the 1/2 line on their defence. However, an over-extension from CJ and a fantastic passive position from Bluey meant things went south very quickly for the Manticore, and eventually the Conquerors were able to slowly collapse on the remaining four tanks and win the fight convincingly to take Game 1.

Game 2 saw Action X go down to a very, very heavy HP deficit during the initial skirmish, where they once again lost the initial fight and positioning. However, some mis-steps from the Conquerors meant they bled a lot of HP trying to clear out some entrenched tanks, and Action X focus fired perfectly—allowing them to turn around the deficit, and charge in with their remaining tanks. Once again, the shots connected on the correct targets, and the Action X scraped through with six seconds left on their attack to bring the series to a 1-1 scoreline!

We then went into the urban map that is Himmelsdorf to determine the series (by the way guys, did you know Himmelsdorf means "Sky Village" in German?). Action X set up more around the 2 flag and tucked two tanks into a pocket at C5, to try and bait the Conquerors into over-extending and taking damage on the incursion. The resulting fight left a ton of wrecks down the middle, and a 2v3 where CJ and Dongerlord tried to utilise their Super Conqueror and T110E3 in some defensive positions to turn it around, especially with Bluey being a one-shot. Another tense game led to a single shot being all the difference—Bluey punished CJ for missing a shot near the very end, and the Conquerors got a win with 246 HP remaining on their last tank.

When it came to the attack for Action X, they decided to go with the usual 2 flag pressure and cap - however, the brawling from the Conquerors on the cap reset was much more convincing this time around, as they were able to find the correct overmatch in tank numbers and secure a much, much cleaner victory this time, to take the series 3-1!

The Sydney Derby is always a delight to watch, and once again the match between these two eternal rivals didn't disappoint the viewers! Going straight into Ghost Town, the Sentinels figured the best defense is a great offence, as they decided to go find the brawl on the 2 cap before the Skorpions even got there. As you'd expect, the superheavies from the Sentinels won the brawl - but the Bat-Chats on JT and Russian for the Skorpions were just able to unload and bring it to a tight 2v2. Some fantastic juggling of HP between both sides left all tanks one on shots, and at the very end, Russian was able to bait the 5 star Wymo into firing a shot, allowing JT to clean up the final two tanks at the end.

The Sentinels opted to contest two positions on their attack, eventually forcing two fights—a 3v3 in the city with the superheavies near the 2 flag, and a 2v2 in the hills at G1. Although they were able to trade a Bat-Chat for an IS-4 in the hills, the brawl resulted in two relatively healthy members alive for the Skorpions as their focus fire and starting position was just a little stronger—eventually leading to a convincing defensive victory for the Skorpions, putting them up 2:0 in the series, and one game away from winning against their rivals.

However, the comeback kings don't give up easily, and the Sentinels went into Himmelsdorf determined to make the reverse sweep happen (again!). A bold play from JT in the AMX 50B up banana was designed to catch out a tank—however, his gamble didn't pay off, and the Sentinels were able to punish him instantly, making the game a 5v4. The Sentinels then took their time to identify the position of the remaining tanks, and bring it a step closer to a tiebreaker.

Once again, the Skorpions tried a bold play to potentially catch out a tank—taking both of their AMX 50Bs onto the hill to perhaps try and clip it out. However, patience from Returned in the Super Conqueror meant the 50Bs bled out, and by conceding hill control, led to a small HP advantage. After flipping the map, the Skorpions tried to gain map control by taking the railyard, with the Sentinels grouping up to push banana and hill towards the 2 flag. With the Sentinels having a tighter grouping on their tanks and crossfires, they won the brawls that counted, eventually deciding to just 3-cap towards a victory and not risk anything at all, forcing their opponents to Prokhorovka for the tiebreaker!

The Sentinels opted to go on the defence with their selection, and decided to control the right side of the railyard as they didn't have any tank to pressure out the T-100 LT the Skorpions brought. As the Skorps began to take cap pressure on the 1 flag, the Sentinels were able to spot two potential overmatches, and commit their forces over the rails to dig out a Super Conqueror, T-100 LT, and IS-7 that were tucked in by the Skorpions. With a 4v2 tank advantage, the Sentinels just ensured they played the positioning game, and utilised better positioning to bleed out the Skorps. In the end, the Sentinels made the reverse sweep happen, and they continued their tiebreaker victory streak!

The Perth Panthers brought in their newest pick in godmode to tussle in the debate between who's better - the Cats, or the Dogs. Tundra was the port of call for our final series of the night, and the Bulldogs took the first opening half seeing if they could bleed any tanks over-extending in the northern parts of the map, with Madhouse taking some cheeky shots into the town onto Twit. When push came to shove, the Bulldogs elected to take both capture points—forcing two brawls, which initially went in favour of the Brisbane Bulldogs, as they were able to eliminate and trade three tanks for one. However, with time not being on their side, the Bulldogs were unable to focus down the remaining defenders in time, and of course it was the debutant making the largest impact of all - godmode staying alive, and making sure there was just not enough time for the Bulldogs to take an attacking victory.

For the Panthers' attack, they elected to eventually push the majority of their forces to the northern part to force a huge brawl amongst the defending Bulldogs players. A crucial brawl between the B-C 25 t and STB-1 in hill left the STB-1 on a one shot, meaning Madhouse could not rotate into the fight with additional HP. The focus fire of the Panthers allowed them the tank advantage over the Bulldogs, and with a minute on the timer, they elected to force the cap against Madhouse. He couldn't find an angle which wasn't covered, leading to the Panthers taking another victory, and leading the series with a 2-0 advantage.

For Mines, the Bulldogs elected to take the mid-hill on their attack, with the Panthers happy to utilise cross-fire positions on the island and in base to control their side of the map. With risk on either side of the map, the Bulldogs gambled on taking the island route—and they succeeded initially, by punishing the B-C 25t in Goober, and pouncing on JS when he decided to clean up on Ravvi. With the 2-flag pressure and the situation now looking dire for the Panthers, some crucial resets from Dastardly playing for his team allowed godmode and Twit to rotate and buy more time—and with Madhouse falling off the cliff as well, godmode was able to do his best work by surviving until the end, and as the sole survivor, taking another victory to make a series victory for the Panthers!

Going into the final match, it was almost as if we saw the same strategy, with the Bulldogs running the same base/island defense, and Panthers taking hill control early on. However, a cheeky position from the CS-63 at K9 allowed crossfire opportunities for the Bulldogs should the Panthers decide to charge down the 8/9 line, and by fate, the Cats decided to throw their wind behind the sails of an 8/9 attack. This push was deflected, stalled out, and eventually allowed the rest of the Bulldogs to get into position to clear out some low HP members on the Panthers. Although HP may have been favouring some of the members on the Cats, being down in numbers just means there's more tanks shooting at you, and eventually the Dogs were able to salvage a much-needed victory to ensure they weren't clean swept out of a very close series.

For our avid ANZFL fans, the best performing team of five for week four could get you a maximum of 1581.4 points based on a starting lineup of five.

You've got a bit of reprieve with a long weekend, but for heaven's sake, don't let any WG employees be in the Top 5! They can't keep getting away with this! 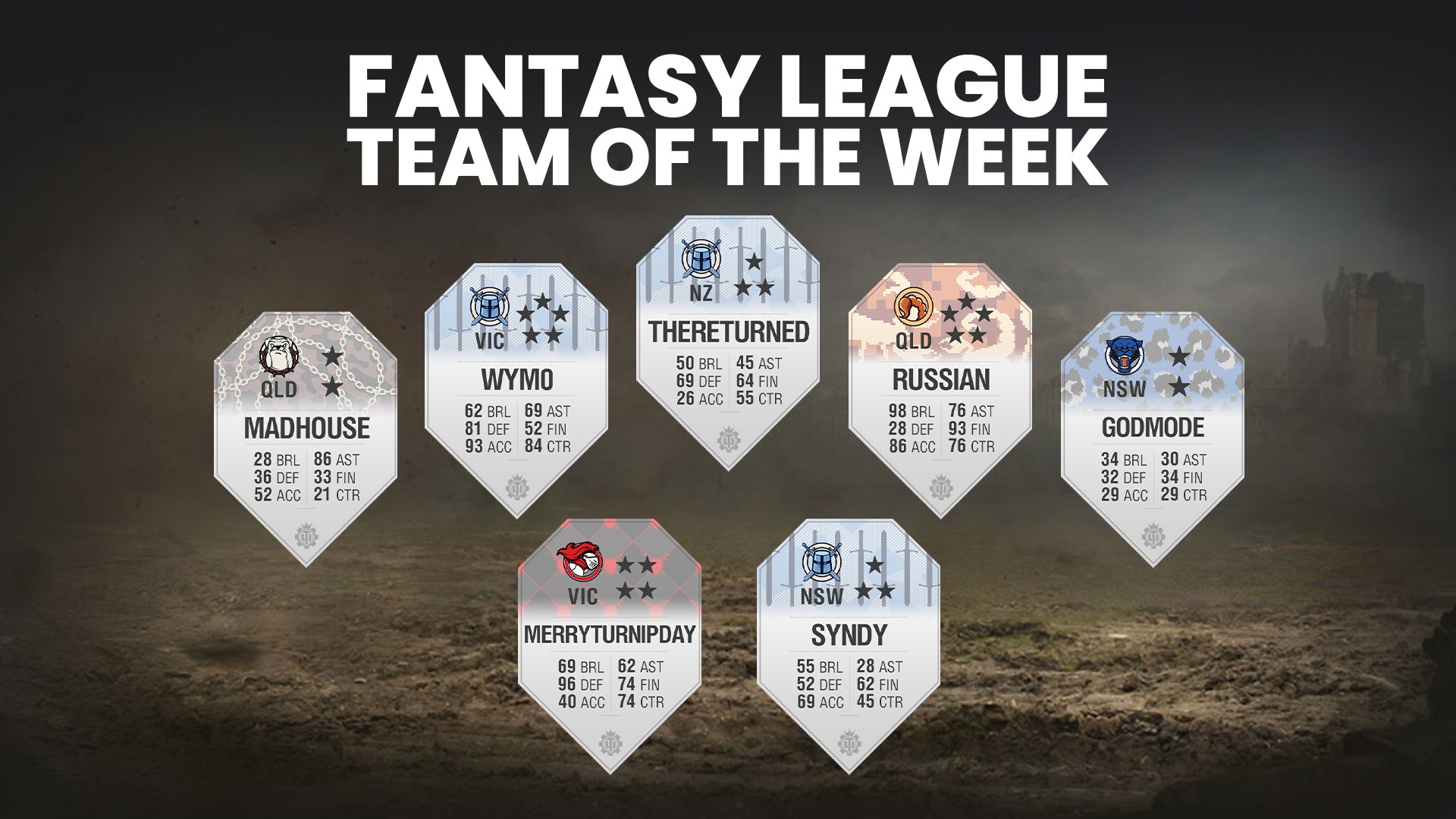 We have a break week this week, so from us WeeGees down under, we hope you all have a safe and relaxing long weekend wherever you are! ANZPL resumes on Friday the 22nd of April, and we've got the Conquerors taking on the Skorpions, followed by Action X and the Bulldogs, and finishing the night, the Panthers up against the Sentinels.

However, ANZBL is starting, so get behind the grassroots of ANZ esports in World of Tanks, and come cheer on your favourite team! We've got new names, Twitch Drops for some credit and XP missions when playing on the ANZ server, and some new faces to bring you the action! So make sure you tune in on Monday the 18th of April at 7PM AEST (UTC +10) to check it out!

The Christchurch Conquerors find themselves firmly in the lead, with some solid victories in this last week. But it's still too close to call for a lot of teams, and we've still got lots of action to come before the top four teams are determined! 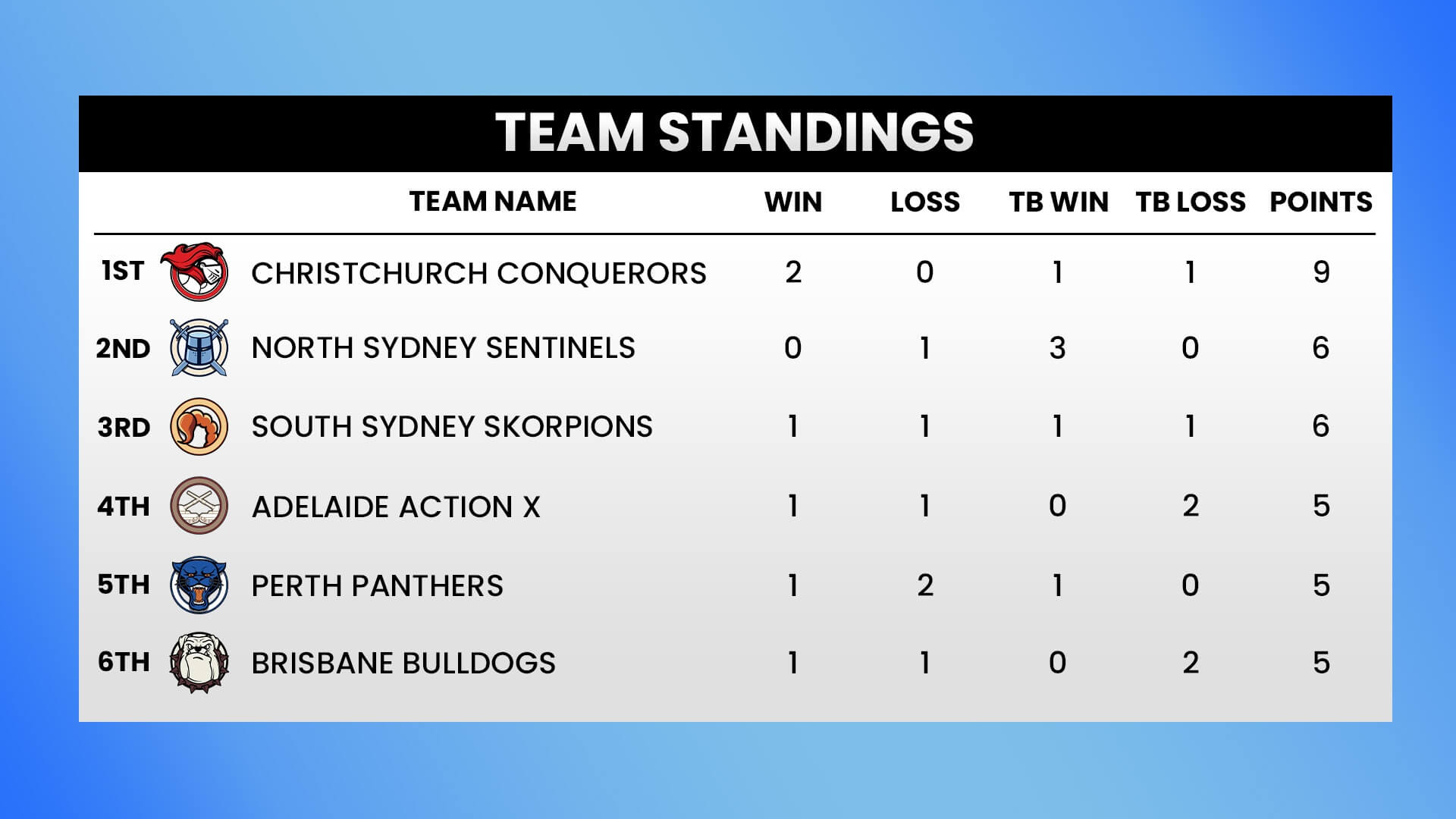