Ladies and Gentlemen, with the biggest match of Season 4 about to pop off this Saturday on the 25th of June, it is about time we take a walk through some of the best strategies used this season by our two Grand Finalists - The North Sydney Sentinels, and the South Sydney Skorpions. As we all prepare for a fantastic night of tanking, let's take a deep dive into how these teams both utilised strategies that were able to effectively overcome their opponents. This could give us some potential insights and keys on how either team will be able to take the victory come Saturday evening.

First and foremost we will look at The Sentinels, coming in from the upper bracket, and looking to reclaim their crown once again to become the three-time champions.

In the final round of the regular season, we saw them squared off against the Perth Panthers on Himmelsdorf. We see the Sentinels on the attack with two AMX 50B’s, two E 100’s, and an IS-4, trying to overcome the defence of the Panthers, who were utilising two E 100’s, two IS-4’s and a Super Conqueror.

When we first look at this lineup of the Sentinels, the first thing that stands out is the double 50B's - this is fairly uncommon on the attack, due to lack of armour and lack of HP in comparison to the super heavies normally deployed. As a result of this, it is much more common to see one 50B on the attack, so you can bulk the rest of the team up.

With the start of the game, both teams have their initial positions, with the Panthers playing heavy 1-2 line controlling the rail yard, and only leaving 1 tank in the vicinity of the 2 cap in the city, which was LightningMan in the Super Conqueror. The Sentinels on the attack by choosing to send all 5 tanks to the top of the hill.

With these initial setups, we can see that this game is going to now depend on how Sentinels choose to play the 2 cap, and setup for the re-push, playing around how Panthers will go about encircling and repushing to get those resets onto the cap. We then have the Sentinels start to push down from the hill.  The fact that they do not get spotted on this incursion down the hill gives a great indication to them that Panthers do not have a tank set up in the A4 Window. Even though this information is very small, they are able to use this and the call is made to push the 50B’s into a very aggressive position at said A4 Window. This is not the normal positioning of 50B’s, which you often see as a clean-up vehicle behind the primary line. However, by doing this, we can see that this places a huge amount of crossfire potential into any re-push through the B line and the 5 line, with the two E 100’s placed on the cap at A7 and the IS-4 on the cap at B6. These positions on the cap circle force the Panthers to make a fast rotate.

The Sentinels know they have the advantage, as it means that the Panthers cannot waste any time moving to a potentially safer position to reset from, for example B7 or B8. This means that they can train all their guns to only 2 directions, which makes it a free win if the Panthers push in; it's just too much for the Panthers to get past DPM and angle-wise.

This effective use of quick thinking and adaptability placed the Sentinels in a highly advantageous position, which forced the opposition team to make a misplay that ultimately gave the Sentinels the victory. This type of play style is one that Skorpions are going to have to be on the lookout for in the Grand final, as the ability the Sentinels have to quickly change their strategy on a dime makes them a ferocious opponent.

Now it's time to look at the other side of this thrilling matchup, The South Sydney Skorpions. The Strategy we will look at here occurs yet again in the final week of the regular season, versus the Christchurch Conquerors. So to start, we are on Prokhorovka with the Skorpions on the Defence, bringing a 60TP, 2 Super Conquerors, a Strv 103B and a T-100 LT. The Conquerors on Attack brought to the table 2 IS-7's, 2 Super Conquerors, and an UDES 15/16!

Looking at the team's initial setups, we can see the Conquerors on the attack have opted to try and make their play towards the 2 cap. Whereas the Skorpions have chosen to take a fair amount of map control to look to cover both caps. Although potentially risky, the goal of taking a large portion of map control could mean the Conquerors become pinned in a position, which then allows the Skorpions to manoeuvre freely. The key thing to note at first is the positions taken by the Skorpions after JT in the T-100 has cleared out the 1-2 line.

We can see the huge amount of crossfire potential the Skorpions have with their tanks. The amount of DPM between the tanks holding that crossfire already makes it already a very difficult situation for the Conquerors to re-take map control off the Skorpions. The main lynchpin for this strategy is the location of the STRV by Russian on the island towards the right side of the map. The position he is playing is a very strong spot when played correctly, due to a combination of factors - a bush being able to provide a strong camo value, along with elevated terrain making it very difficult to push attacking tanks into.

The only way for this position to be dug out is if the STRV gets lit, or effective communication from the opposing team can narrow down its location to that spot and then you can blind fire that area. Initially we can see Russian in the STRV hold his fire until the Conquerors IS-7's have committed, before opening fire and getting spotted. By doing this, the Skorpions reduce the amount of counterplay the Conquerors have against him - the patience has forced them into a very awkward situation. Due in part to the excellent positioning by the rest of Skorpions with the information gathered by the T-100 LT and STRV on the Island, this makes it a nightmare for the Conquerors, and an impossible situation to escape from. You either stay and get farmed by the STRV which you cannot counter-push onto, or you cross and get destroyed by the crossfire setup by the Skorpions. 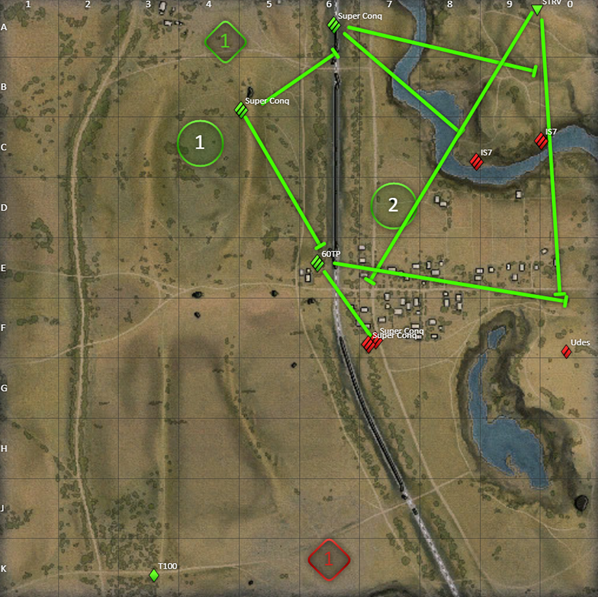 This beautiful initial setup and strategy had the Conquerors pinned into the corner as soon as their strategy was to go towards the 2 cap. By effectively setting up their tanks in a matter that can react to whatever they see with their vision control, they then utilise this information to try to gain an early advantage, which then snowballs into a victory. This is going to have to be one of the many factors Sentinels will have to look out for in the Grand Final, because if the Skorpions can coerce the Sentinels into playing the way they want, we could see some very interesting games.

Of course, we can hypothesise all day, but the best way to find out the victor will be at the venue, live this weekend - you'll get to meet the teams, the WeeGees, and best of all, get the prime front-seat action that is expected with ANZPL! If you haven't gotten your tickets yet, you need to get them now!

Alternatively, make sure you catch us on the day, live from 6:40PM AEST - with Twitch Drops and special guests, there's never been a better time to tune into World of Tanks ANZ Competitive Action. We'll see you all there this weekend!