This week was the final week of the regular season. With the scoreboard all but set in stone, let’s recap on the results and find out who we’ll be seeing in the playoffs!

Once again in familiar territory for the Skorpions, teams started off on Mines. The Conquerors take early hill control, while the Skorpions hold strong while stealthily flanking two Obj 277s around unspotted. When Bluey attempted to rotate off the hill safely, he suddenly found the pair and forced the Conquerors to dump all their tanks in to get the kills, at the cost of a lot of HP. The Skorpions were slightly over-extended on the hill, meaning the Conquerors were able to get the pick on Auzzi and a great flank from Whippet saw the Conquerors in a 3v1 endgame, securing them the first victory of the night.

Match 2 played out much differently, with both teams charging straight to the hill! The Conquerors opted to use AMX 50Bs to help with the fight on the hill but Auzzi and Russian managed to stay away from their guns long enough for their allies to arrive. The ensuing brawl was close, but the Conquerors began to feel the sting when their remaining tanks were caught reloading. Whippet put up a valiant last stand but couldn’t get away in time, allowing the Skorpions to level the score.

Moving to Prokhorovka, the Skorpions spread out and used a Strv 103B to cover the eastern side of the map. The Conquerors who had pushed out that side were unaware of the Strv’s location and suddenly got caught out and punished when moving up the 7 line. In an attempt to salvage, the Conquerors pushed over the railway line to get away from the Strv’s gun but by then their HP lead was well and truly gone. With no time or HP left, the Skorpions got their second victory as the battle timer hit 0.

With neither team now unable to make playoffs, this series became a fight for pride between both parties.

Starting out on Sand River, Action X spread out through the south and got great early bleed on MadHouse’s VZ. 55, before slowly closing the distance and continuing to bleed the Bulldogs. They eventually arrived in C7 with Bulldogs losing two tanks and Val winning the 1v1 against Buck3t. Action X proceeded to clean up and claim the first attacking side victory of Sand River all season.

This went from bad to worse for the Bulldogs on attack, lacking a fifth member while Cows went to graze. Despite this, the Bulldogs launched an assault through the K line and attempted to contest the 1 flag. Action X were quick to surround the Bulldogs and focus down two of their VZ. 55s, leading to their second win on the board.

Moving to Ghost Town, Action X played slow toward the 2 flag, attempting to get map control. The Bulldogs, running five heavy tanks, lacked mobility and Action X desperately tried to figure out where the blob was going to be. As the cap pressure began, MadHouse rotated to the 1 line to provide cross-fire but wasn’t able to get many shots off. A split repush from the Bulldogs saw their demise with AVP taken out early and the Bulldogs scrambling to get reset shots before being taken out one by one.

With the victory already claimed by Action X, both teams opted to have a bit of fun in their last match of the season, bringing out a smorgasbord of unusual tanks including a FV4005, AMX M4 54 and of course Action X’s namesake, the Centurion Action X. Bulldogs set on cap pressure on the 1 flag, with Tank Destroyers covering the flanks. AVP got an incredible 1878 HP shot onto DongerLord, triggering the start of the Bulldog’s repush in and with Eugene completely isolated and way from the main fight, the Bulldogs managed to get at least one win for the night.

If there was one match all eyes were on, it was this one. With the Panthers potentially stealing second place from the Sentinels and moving to the upper bracket in Playoffs, the pressure was on the Sentinels to win this and retain their position.

The first match saw the Sentinels defend the 1 flag ‘rails’ on Himmelsdorf, with the Panthers making a decisive push onto Rainbow’s IS-4 early into the battle. Wym0 tried to help Rainbow but ended up becoming another target for the hunting pack! The brawl went back and forth with both sides losing tanks, resulting in a 2v1 for the Panthers. With the odds against him, TheReturned pulled off the impossible comeback and managed to clutch the defending victory for the Sentinels.

Now on the attack, the Sentinels formed a train and charged up the hill and down the 0 line. The Panthers were completely unprepared for this, and the Sentinels managed to cross two AMX 50Bs into A4! With triple cap pressure, the Panthers scrambled to get resets but found themselves having to face two autoloaders to even attempt it! Despite getting a few resets it wasn’t enough and the Sentinels quickly captured their way to victory.

Switching to Murovanka, the Panthers opted to bring a Manticore on their attack, with the goal being to use it to bait out a repush on the 2 flag. However, Syndy hid in a very sneaky bush and spotted all the Manticore’s rotations. LightningMan got some great bleed onto Wym0 but lost a lot of HP when trying to get onto the capture circle. The Panthers started losing map control quickly and a decisive push in the north from the Sentinels shut down all of Panther’s dreams of a comeback, with the Sentinels winning three in a row.

With the score decided, the Panthers opted for some ‘fun’ tanks on their defence, featuring a T110E3, Strv 103B and of all things – a Sheridan! Meanwhile the Sentinels opted for five heavies, one being a Maus and charged straight onto the 1 flag. Realising how split the Panthers were, the Sentinels pushed on and got the elimination onto JS and GodMode. LightningMan meanwhile was on fire, taking out two tanks in his T57 Heavy! The Sheridan’s 152mm HE shells struggled against the Maus’ heavy armour and the Sentinels once again captured their way to victory resulting in a 4-0.

End of the Regular Season Wrap-Up

At the end of the regular season, we find familiar names in the South Sydney Skorpions and North Sydney Sentinels at the top of the leaderboard, earning themselves an extra life in the play-offs bracket, alongside a shot at directly making it to the LAN finals at Fortress Melbourne on Saturday, the 25th of June. 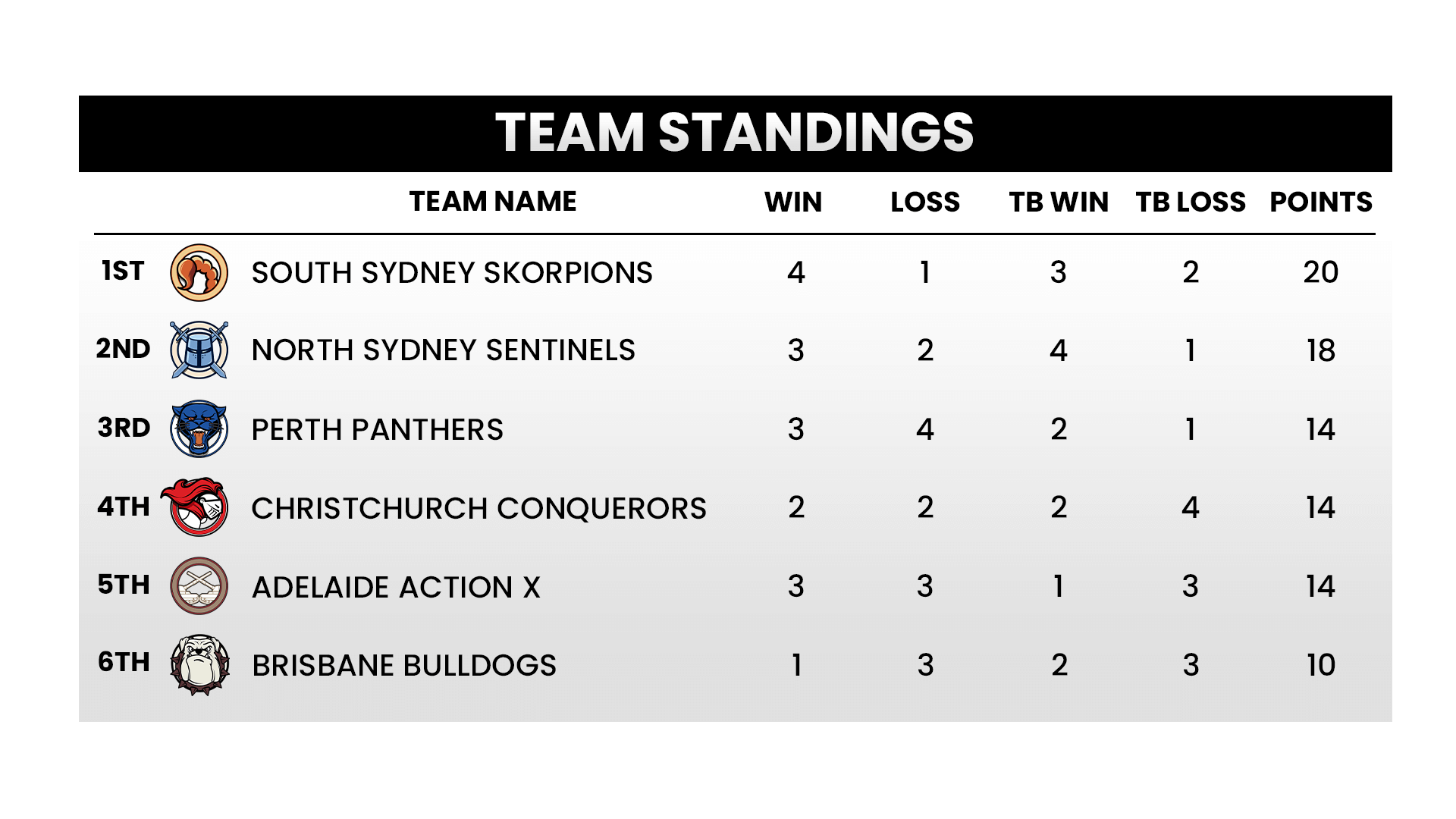 Fantasy Team of the Week

The regular season Fantasy League may be over, but there is still the play-offs Fantasy League to see who is the best fantasy player when it comes down to the crunch time! Remember to submit your picks at fantasytanks.com before the matches start tonight. 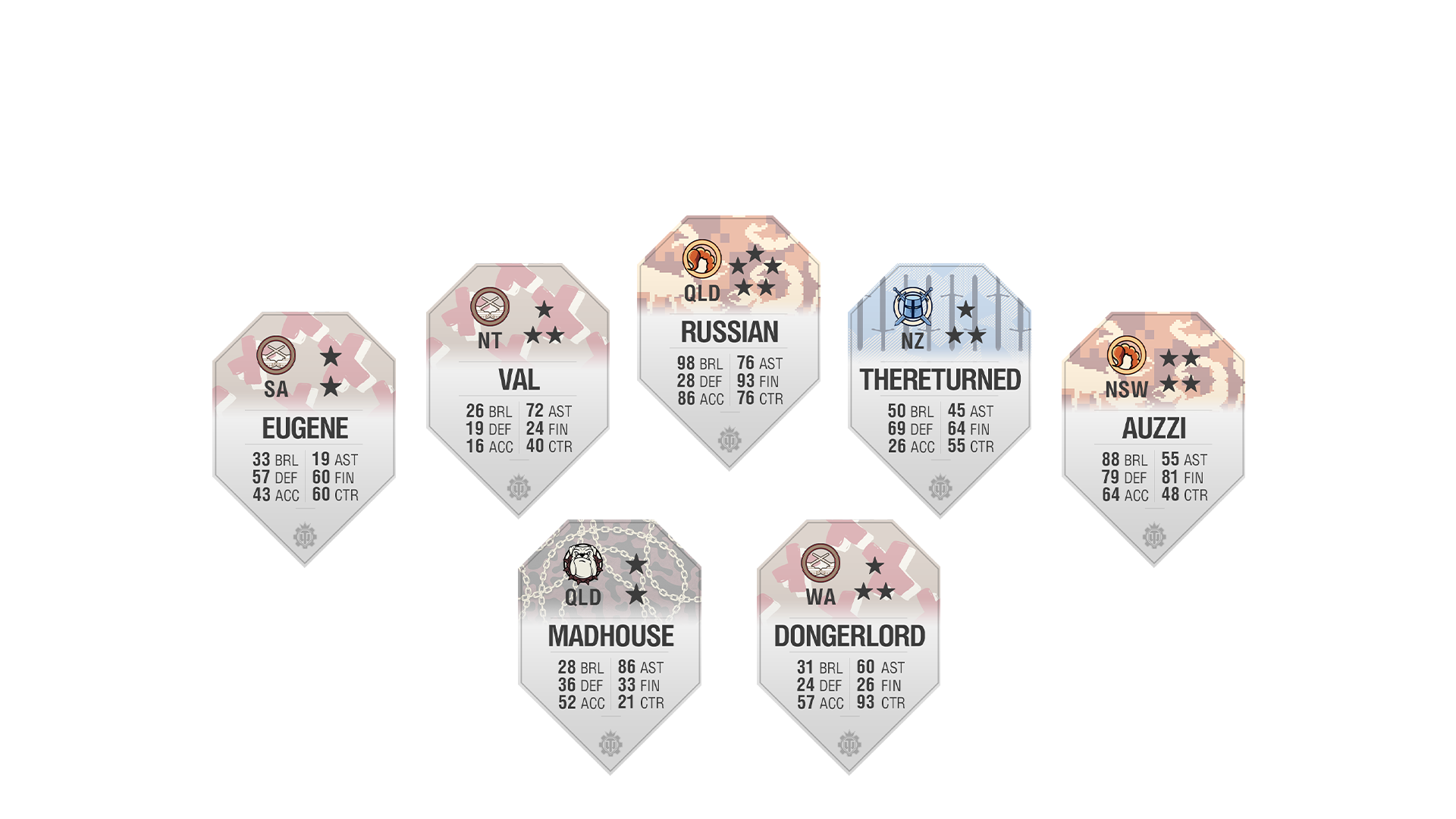 It's playoffs baby! The Perth Panthers and the Christchurch Conquerors are set to duke it out first in a matchup that will decide who goes on to the consolidation round. After that we're treated to yet another Syndey derby to see if the  South Sydney Skorpions can continue to hold their own against their long time rivals, the North Sydney Sentinels!

Monday saw the consolidation finals for the ANZBL, with two teams clashing for their spot in the Grand Finals.

Starting off on Mines, the Centurions aggressively took the 1 line ‘island’ on Mines, while the Badgers looked to defend from the hill. Identifying that StiFe was alone, the Badgers pushed to eliminate him before reinforcements arrived. Some accurate shots saw Snozzle taken back to the garage, and the Badgers committed a lot of tanks into the low ground to get kills, losing a lot of HP in the process. A critical missed shot from Solitarian saw the Badgers trade evenly, and with the Centurions unable to take out Phantom_Yamato quickly, it turned into a 2v1 with all tanks a one-shot. Ultimately it was the Badgers who were quicker on the draw and secured their first win.

Swapping sides, the Badgers were quick to take hill control, while the Centurions opted to spread their forces out and take control of the island. The Centurions tried to flank with their CS but were forced to retreat when the repush arrived. This evolved into the Badgers making 2 flag cap pressure with island support but despite getting close the resets arrived, forcing the Badgers to push into crossfire which ended badly. With the HP firmly in the Centurions’ favour, it was only a matter of time before victory was theirs, resulting in a victory with 0s left on the clock.

On Prokhorovka, the Centurions took early map control, with their T-100 securing the 2 line easily and the majority of their forces committing to the east. The Centurions rotated their forces and started to apply cap pressure on the 1 flag. The Badgers replied with a push on the F line taking out StiFe while AuzzieNoob got resets at B5. The resulting brawl was close but a slight over-peek from Mirras saw him get ammo-racked and the Badgers once again got a defending side victory.

Now on the attack, the Badgers made a push down the 1-2 line, right into the guns of the Centurions! Bubbles was quick to go down but Toddy's Strv was spotted out, trading one-for-one. Despite this the Centurions bled so much HP out of the Badgers that they weren’t able to get any more eliminations and the Centurions held strong to level the score.

Murovanka was the next map and the Centurions opted for an unusual push through the forest with a UDES 15/16, eventually moving the rest of their forces through the middle of the map. Unfortunately they burned a lot of time doing this for little gain but a K line push saw the end of Snoozle and a misplay from the Badgers plus an ignite onto Bubbles saw the Centurions suddenly have a massive HP advantage. Swarming the survivors, another ignite saw the Badgers go up in smoke, securing the attacking side victory for the Centurions.

The Badgers opted for a classic Murovanka attack, with a Batchat in D1 protecting the rest of the team pushing down the 2 line. Unable to get resets with their T-100, the Centurions used a Kranvagn and S. Conquerors on the 3 line instead. This turned disastrous as the Badgers quickly repushed, forcing a brawl the Centurions weren’t prepared for. The Centurions rotated the rest of their heavies into the fight but were quickly outflanked, forced to drive into cross-fire. As the dust settled, the Badgers were the survivors, meaning a tiebreak was in order.

Choosing to defend on Tiebreaker, the Badgers brought out their namesake tank and opted for a classic defence in the northwest corner of Himmelsdorf. The Centurions committed most of their forces over the hill but used Toddy on the 8 line to get some information as to the Badgers’ positions. With several tanks being spotted out before the cap pressure was applied, the Badgers took the opportunity to rotate their tanks into the 5 line. The decisive push came through D6 with a massive brawl ensuing. The Badgers took first blood and used that advantage to get the HP in their favour. The focus fire was too strong for the Centurions, with the Badgers claiming the tiebreak victory, ready for their rematch against the Comets in the Grand Final.

As a reminder, the match between the Cairns Comets and the Bundaberg Badgers to see our new ANZBL champion crowned will happen on Friday, the 10th of June - during our ANZPL broadcast. Make sure you catch the action next week for everything BL related!