We're now in the final Stage of this Season of Frontline, which ends on the morning of 1 June! If you've already earned or are close to getting the first 12 tokens of the event, you might be wondering which of the three Tier IX reward vehicles would most suit your playstyle. 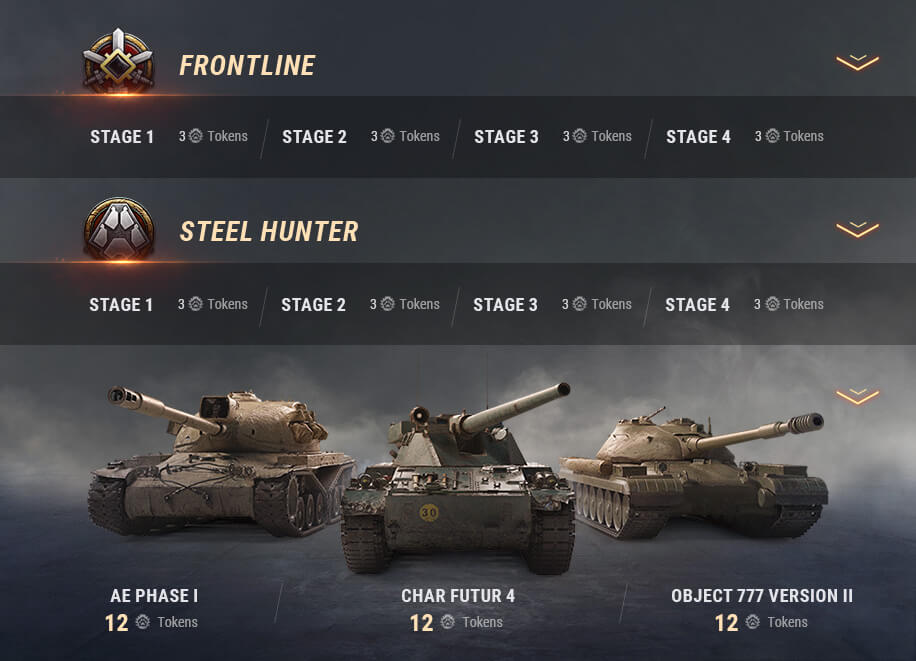 We've already discussed the AE Phase I and Char Futur 4, so the time has come for us to take a closer look at the third member of this tough trio: the

Work on introducing the Object 777 began in 2015, in game version 0.9.9. Back then, the tank was supposed to be a Tier X vehicle. However, due to many reasons, the debut of this armored vehicle in World of Tanks was delayed for 5 years.

Nevertheless, this Soviet Tier IX heavy tank is finally combat-ready, and will make a great addition to the worthy Commander's tank collection.

The Object 777 is an improved version of the Object 752. In developing these tanks, a new approach to armor protection was devised: because of the dense module arrangement in the Object 752, the vehicle's height was only 2,300 mm, which is 150 mm less than the already low-lying IS-8. Then there was the Object 777 with its height of 2,100 mm at hatch level–even lower.

In other words, this heavy tank turned out to be lower than the T-64!

Concealment When in Motion
3.48%

The tank crew consists of 4 members: the Commander (who also operates the radio), Gunner, Driver, and Loader. Keep in mind that the Object 777 is a special vehicle, and crews from any Soviet heavy tank can be transferred to this one without penalty.

Before inspecting the armor, we want to draw your attention to the dimensions of the vehicle. This vehicle doesn't stand out for its length and width, and its dimensions are comparable to those of the T-10 or the Object 277. But there's another important quality—its height! This vehicle's hull is lower than that of the T-54! This means the vehicle can take advantage of smaller cover to hide its lower, and sometimes even upper, glacis plate.

Taking a closer look at the hull, the Object 777 Version II's frontal armor is 132 mm and well-sloped, especially the upper glacis plate. Its side armor is 115 mm and the rear armor is 45 mm. However, with such a low profile, the turret's armor becomes even more important because it will be absorbing the bulk of the blows. Its values are decent: the frontal turret armor is 258 mm, the commander's hatch is small, and the 14.5 mm anti-aircraft machine guns at the rear of the turret serve as a 15 mm screen. The solid turret sides will please any discerning Commander with its 225 mm, which is an absolute record for its tier! This combination of dimensions and armor will prove forgiving of many mistakes in battle.

This vehicle's durability is 1,850 HP, which is average for a Tier IX heavy tank. Some of its counterparts have more, while others have less.

Heavy tanks rarely have high View Range values. The Object 777 is no exception as it has a View Range of 380 meters and a Signal Range of 850 meters. The vehicle doesn't have the best concealment values either: 3.48% when it's moving, and 6.9% when stationary. Considering its dimensions, these values are normal for a heavy tank.

The engine's Specific Power is 15.08 h.p./t while its top speed is 40 km/h. Regarding dynamics, its values are very similar to the Object 257 or the M103. With a mediocre Traverse Speed of 22.6 deg/s and Turret Traverse Speed of 26 deg/s, a quick adversary can easily run circles around your vehicle if it gets close enough. Take precautionary measures to prevent such situations and you'll survive much longer on the battlefield.

It’s unlikely that you'll spot, catch up with, or hide from enemies, but the Object 777 has a different role on the battlefield.

Now it's time to check out the gun. Many players will recognize the 122 mm gun thanks to heavy tanks like the IS-4 or the T-10. However, there are some differences.

Playing as a sniper is a bad idea due to its Aiming Time of 2.9 seconds and Dispersion at 100 meters being 0.42. Topping it off, the Rate of Fire is 4.32 shots per minute.

Object 777 Version II  is a typical high-tier Soviet heavy tank, but with some caveats. It shares some similarities with the Object 257, T-10, and IS-4, but the low profile and great armor represent the distinctive features of the Object 777. This combination allows the tank to use almost any cover to take advantage of the vehicle's solid turret.

The Object 777 is good on the attack and the defense. Its size and armor help with this, and its formidable gun is capable of breaking through the enemy's defenses.

In general, it can be said that this vehicle features good gun-handling parameters, a solid turret, and a low hull. Use these advantages and stay close to cover or in a group of allies to achieve the best result. Among its drawbacks is its low Traverse Speed. Always keep an eye on the battlefield situation to prevent nimble adversaries from circling you.

This unique tank comes as an Expedition reward vehicle. To redeem the Object 777 Version II, you need to collect a total of 12 tokens from Frontline and/or Steel Hunter events. Don't miss your chance to play and earn rewards!