Have you brawled in Berlin, yet? We mean, of course, the brand-new map in World of Tanks, not the actual city, although the city does lend more than just its name to this amazing new battlefield.

We met with the developers to take a peek behind the curtains so that you can get a glimpse of the map creation process, and learn about some of the intricacies involved with bringing a battlefield to life.

Timelapse: Building Berlin from the ground up

The development process is quite complex, and consists of multiple steps that will transform a simple idea into a battle-ready map. This article will take you from the first steps during the pre-production phase, all the way to the actual coding and production once the concept is completed.

It can take over a year for a map to see its first battle, but every step is necessary to ensure that you enjoy playing on it as much possible.

Once we have agreed on the setting for a new map–in this case, Berlin during the Second World War–pre-production can begin. Pre-production is the basis for every map production, and it establishes the foundation of a new map.

Ideally, we want to create a map with good conditions for every player, no matter the vehicle type they choose or the role they want to play in battle. We always try to diversify gameplay by creating and embedding different options into a map so that you can use your armor, play from a distance, or engage in close-quarters combat. We also pay close attention to each encounter point and try to give players of each team similar opportunities to take their preferred positions. If one team, for example, has a position close to their base that allows a commander to take advantage of their turret armor, we try to provide a similar position to the other team as well. 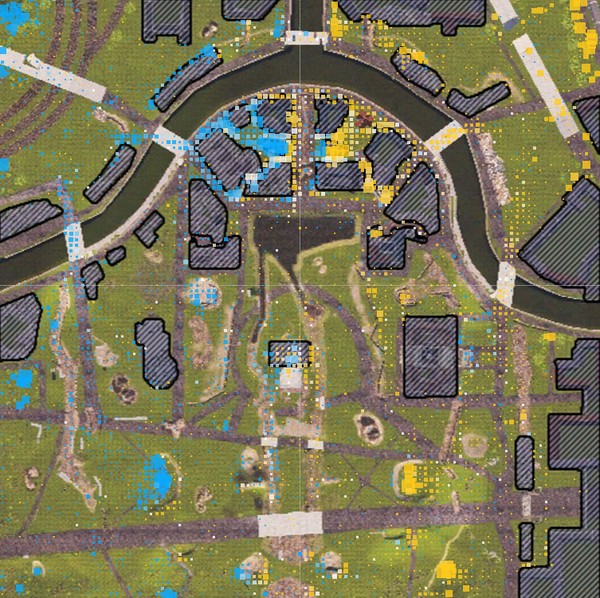 The perfect map combines equal chances for both teams, fun gameplay for every commander, and, of course, an overall enticing atmosphere with unique features. It's a difficult balance to keep, but we take everything into account to deliver the best results. 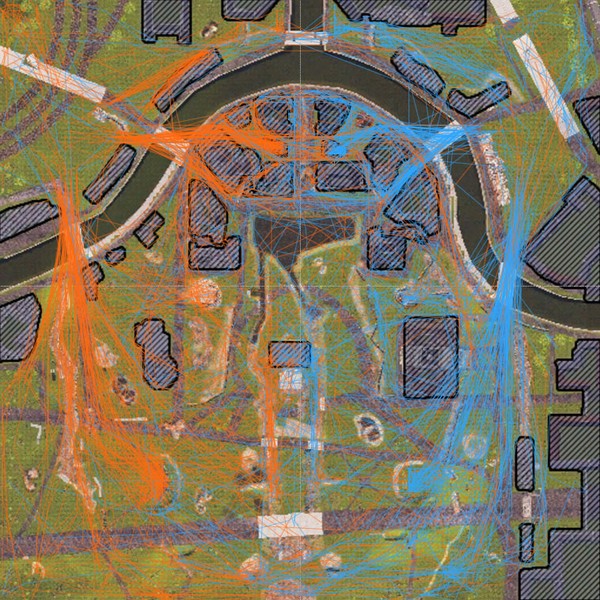 Once level design is complete, we can focus on the look and feel of the new map.

The artistic vision is not only concerned with the appearance of a new map, but also the overall composition. What impression should a player get? What feelings should be evoked?

To make this topic easier to understand, we've divided this part into several subsections that are equally important, with each playing crucial roles in the creation of a compelling map.

Just like many of the already existing maps, Berlin was going to be a historical one based on the rich history of Germany’s capital.

We decided on a period close to the end of World War II, around the time of the Battle of Berlin, at which point we began to do our research. What did the Berlin of 1945 look like? How did the Fall of Berlin affect the city? Which iconic landmarks should be included to make the city recognizable? Additionally, many buildings were damaged and destroyed.

Some were rebuilt later on and are still around today, but others, despite being of historical significance, had to be demolished. 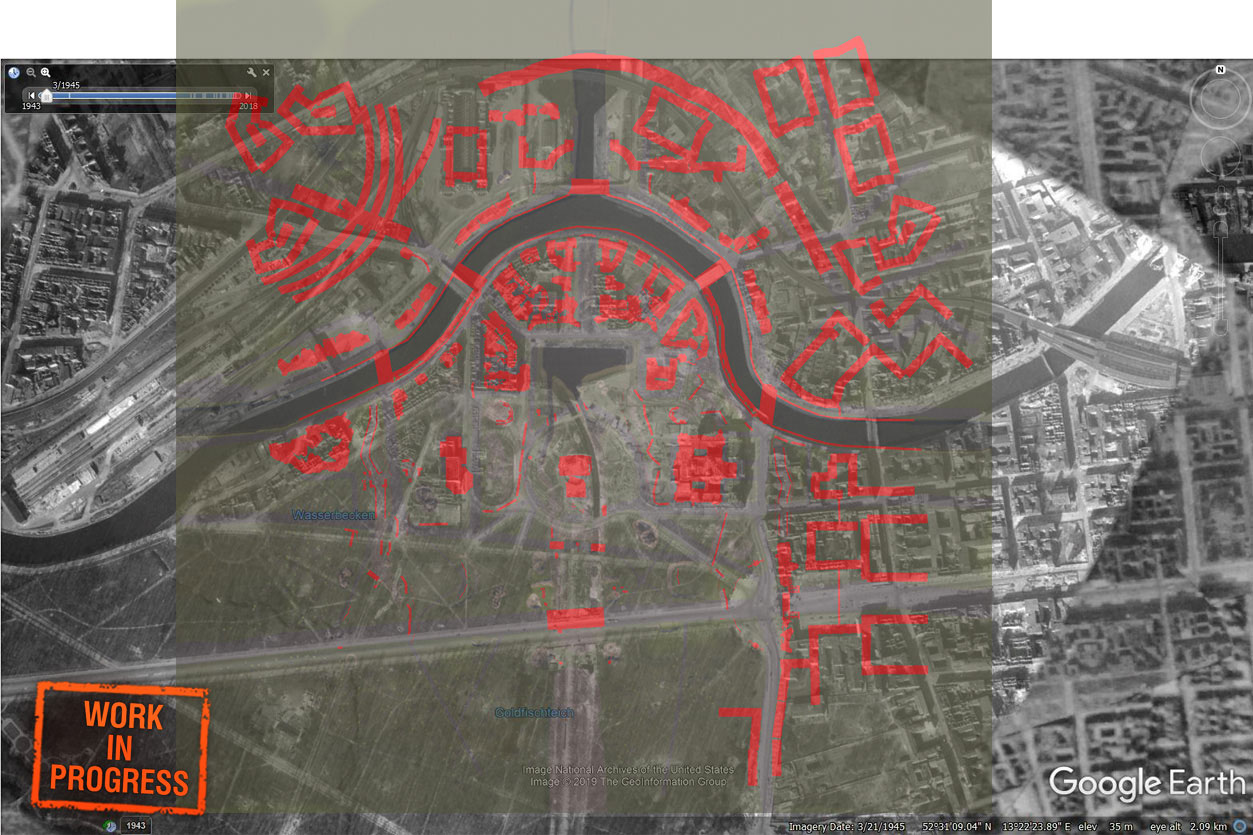 Here you can see the in-game map laid over a map of Berlin 1945. 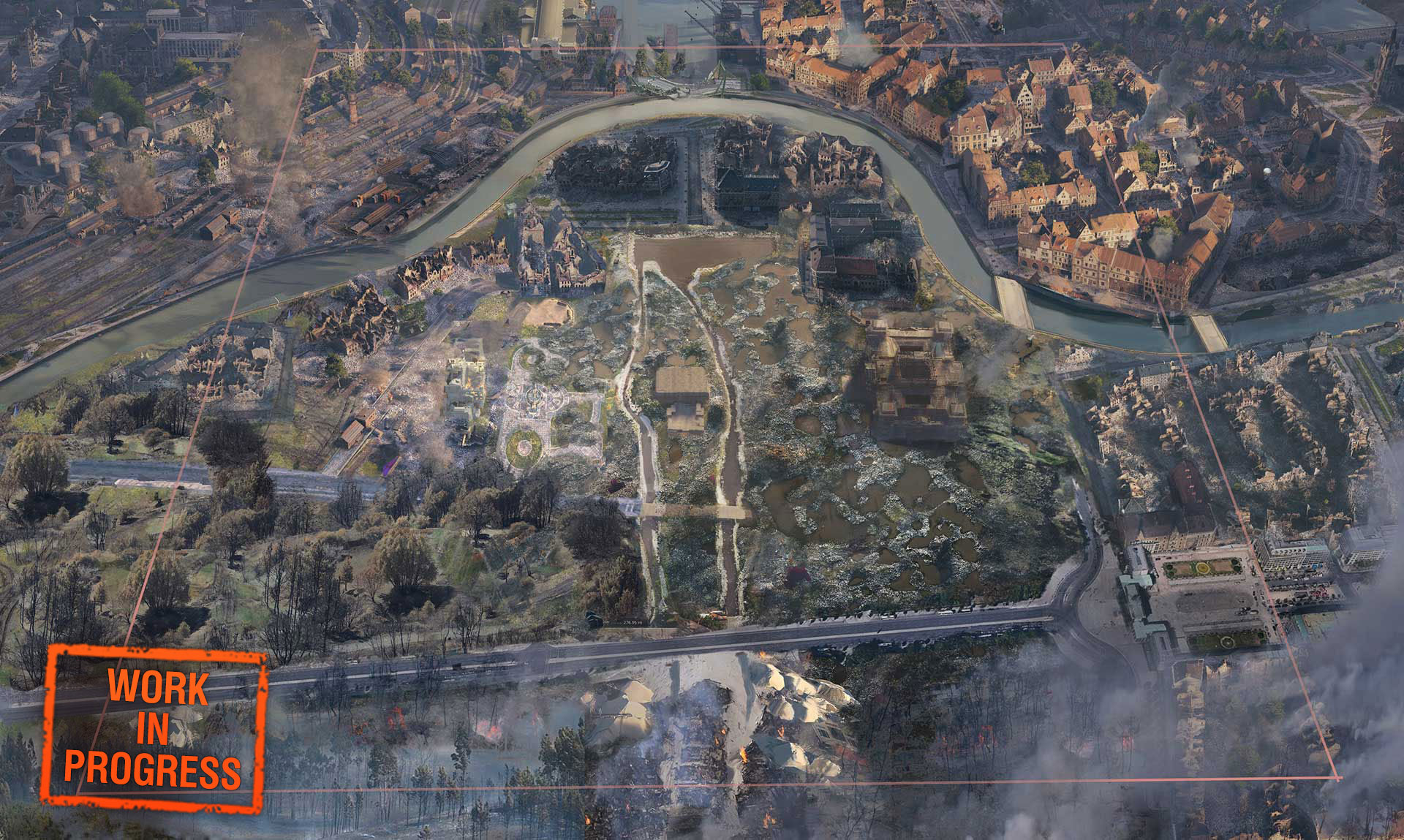 When we are creating a historical map, we have to find a balance between recognizability and historical accuracy on one side, and playability on the other. That's why one of the main difficulties in recreating historical Berlin was to generate as many opportunities for different playstyles as possible, while also keeping Berlin recognizable.

It's not enough for a map to look like its historical ideal. It also needs to feel like it–in this case, like wartime Berlin. The right lighting, paired with a fitting soundtrack and background noise, helps tremendously with becoming immersed in the battle. It sets the tone and highlights aspects of the battle, but it shouldn’t be distracting either. 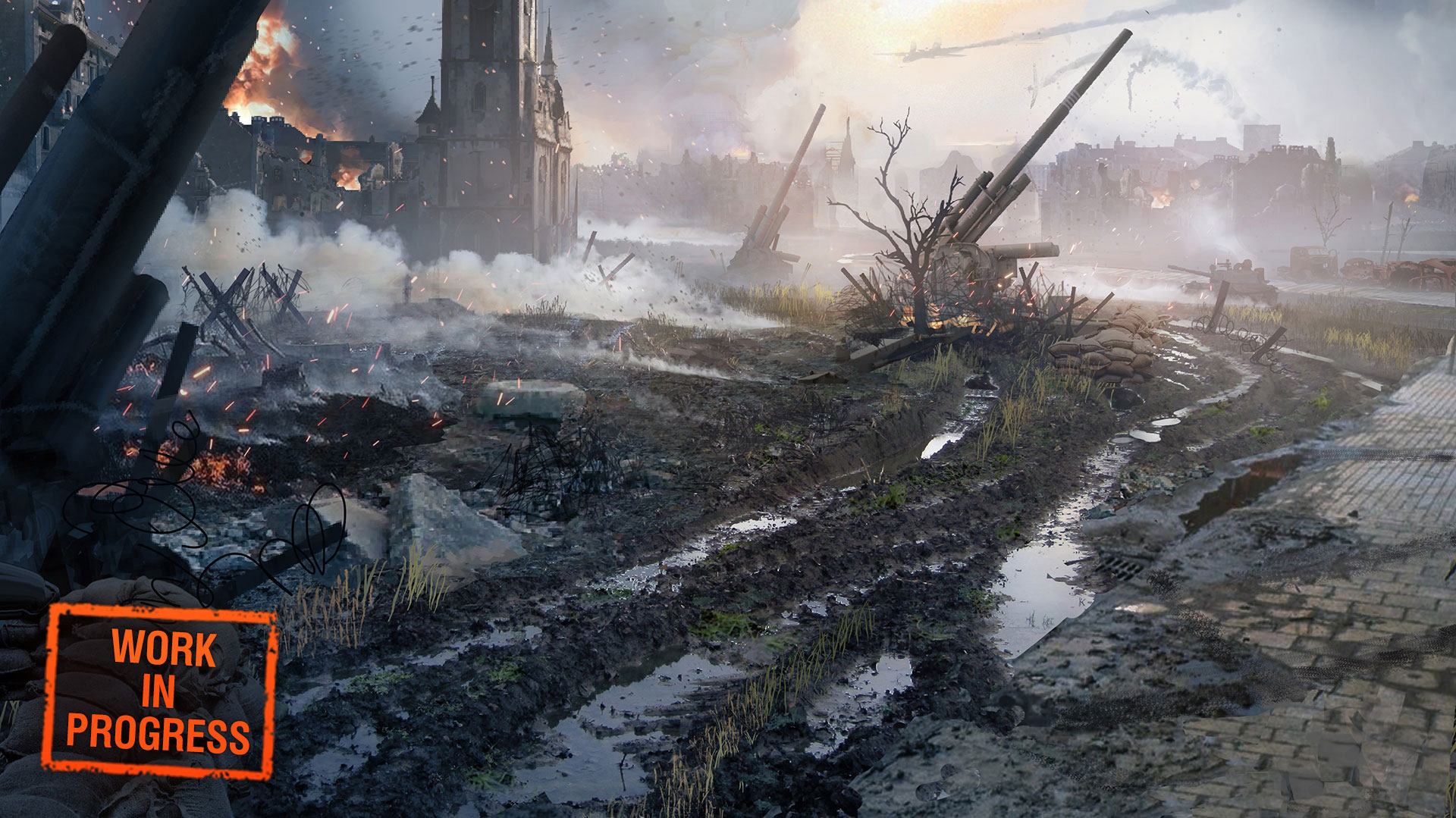 Berlin is quite a big city that's spread out over a large area. That's why we had to find a spot that would include a significant number of landmarks, but could also be shaped into a map with compelling gameplay. We settled on the area around the Reichstag building and the Brandenburg Gate, both of which are widely recognized and two of the most important buildings in Berlin.

While we try to stay historically accurate, sometimes things have to be shifted around and adjusted to provide room for every vehicle type to shine. Fast and maneuverable light tanks, for example, need space to drive around and spot enemies. Ambush TDs are always looking for places to hide and use their concealment, so there needs to be a way to protect them from being spotted. Medium tanks fare well almost everywhere, but they tend to prefer areas with hills to flank the enemy. Heavy tanks love narrow spots that are ideal for a knock-down, drag-out fight. And, of course, there have to be spots that allow SPGs to rain fire from a distance.

Timelapse: Reichstag as it would have looked in 1945. We used numerous materials from more than 300 publicly available sources to recreate the German capital as accurately as possible.

Once again, it's all about the right balance between an instantly recognizable area, especially for players who have been to Berlin, and enjoyable gameplay for everybody. 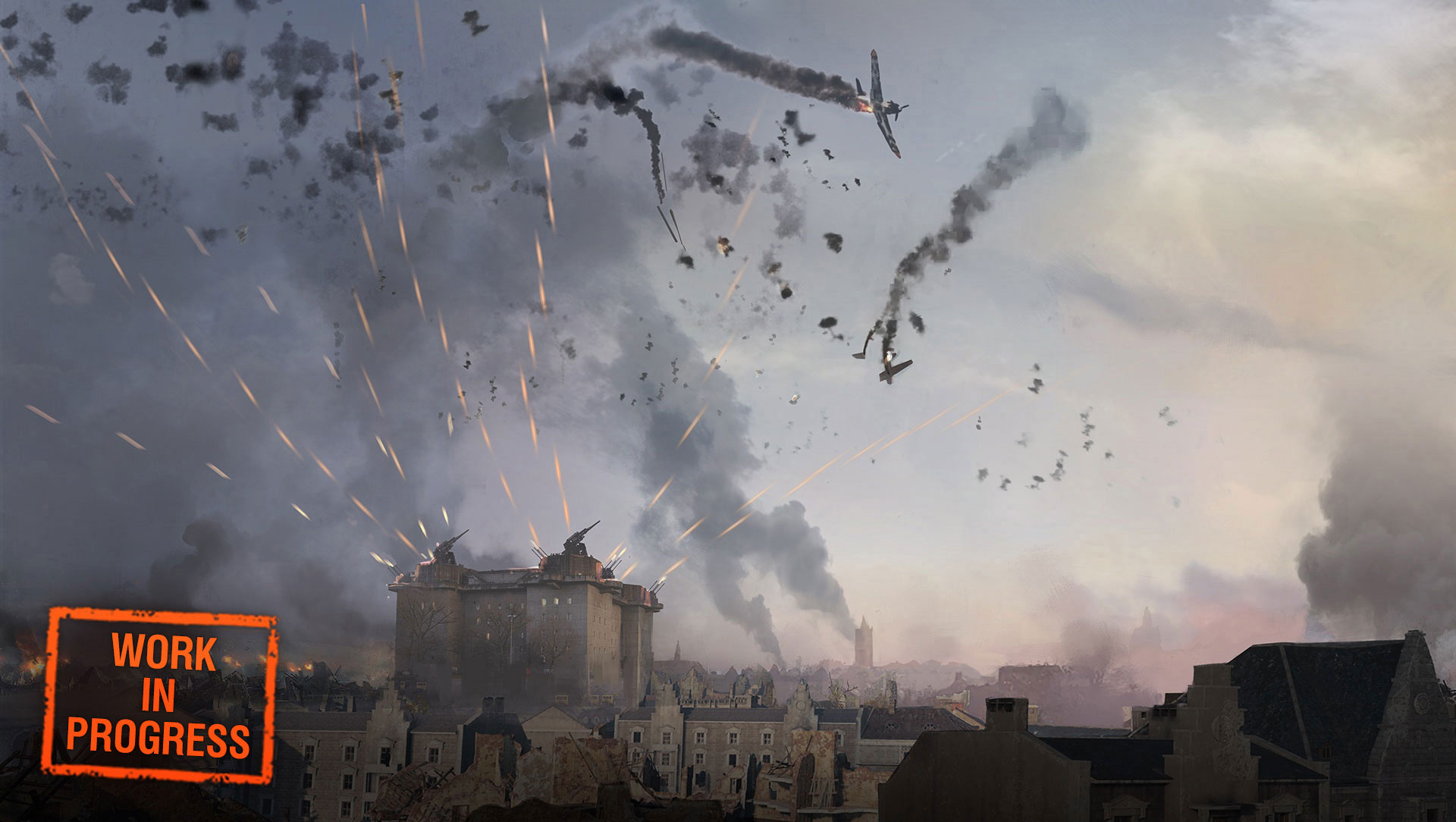 Once the area is decided, the concept for the battlefield itself can start to take shape. After years of developing World of Tanks, we’ve come to realize that a size of about 1000x1000 meters is optimal for tank battles. Teams don't have to split up into different lines for extended periods of time. The route to the enemy base or to switch flanks isn’t too long, and it doesn’t take too much time to support allies. Also, if the map size is too large, vehicles can simply drive across it without encountering anyone, which doesn’t make for great gameplay. And of course, there are technical aspects, especially regarding the rendering and strain on a player’s system.

At 1050x1050 meters, Berlin is actually a little larger than usual, but this leaves more room to set up destructible buildings for interaction, or already-destroyed buildings for protection. Even elements outside a player’s reach, such as clouds in the sky, smoke from burning buildings, and airplanes flying over need to be considered, as they're vital elements in a map. 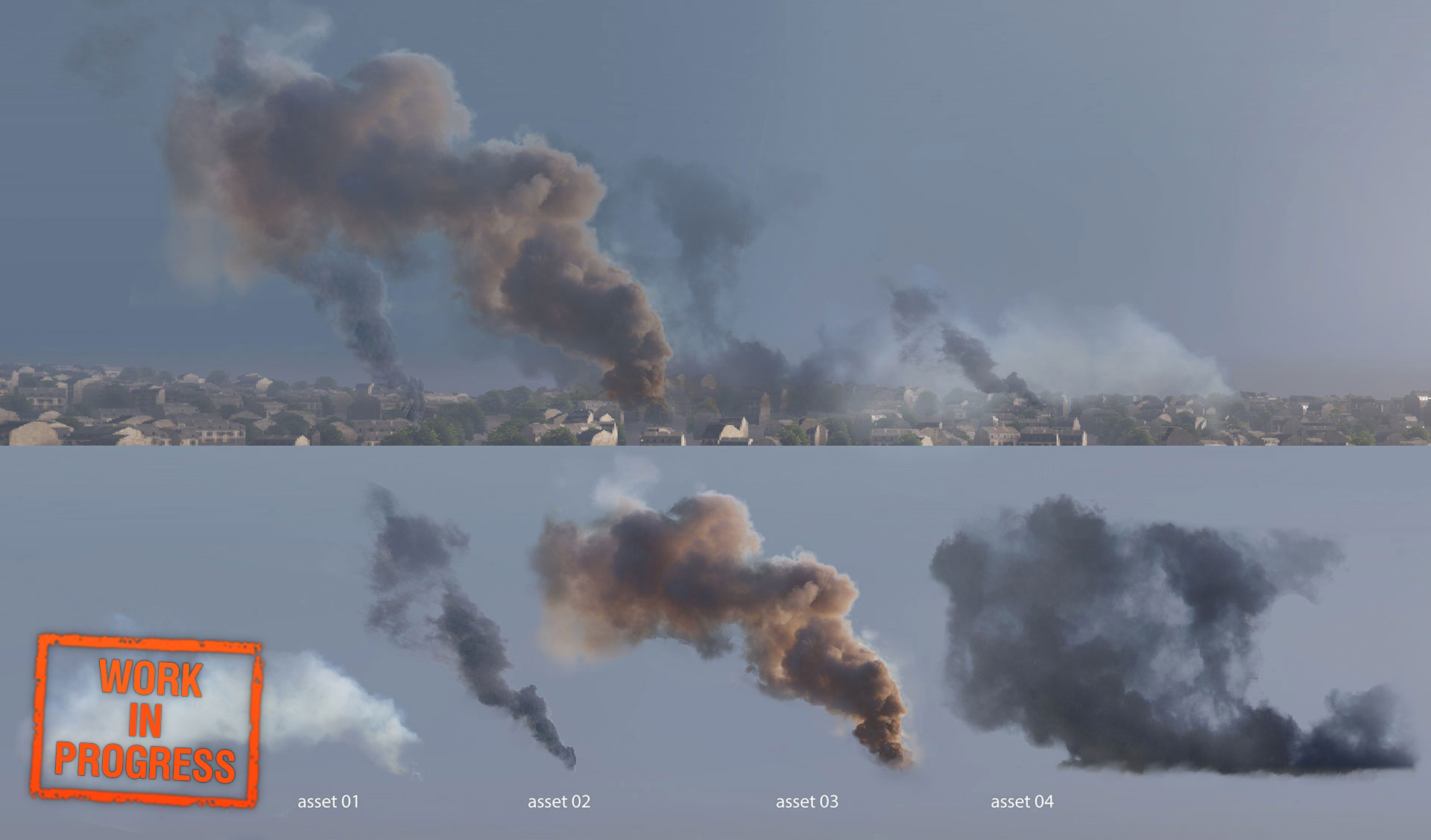 As you might know, the ground that you are operating on influences the movement of a tank in World of Tanks. Pavement is usually considered a hard surface, and it doesn’t have many penalties. Grass and fields are in the middle, which begins to impact traverse speed. Swampy areas and soft terrain can reduce traction quite a bit. The overall direction that a map takes (desert, mountains, city, etc.) is dictated by the chosen landscape. Nevertheless, we still need to lay out the terrain and consider the placement of bushes, trees, hills, rocks, and more. 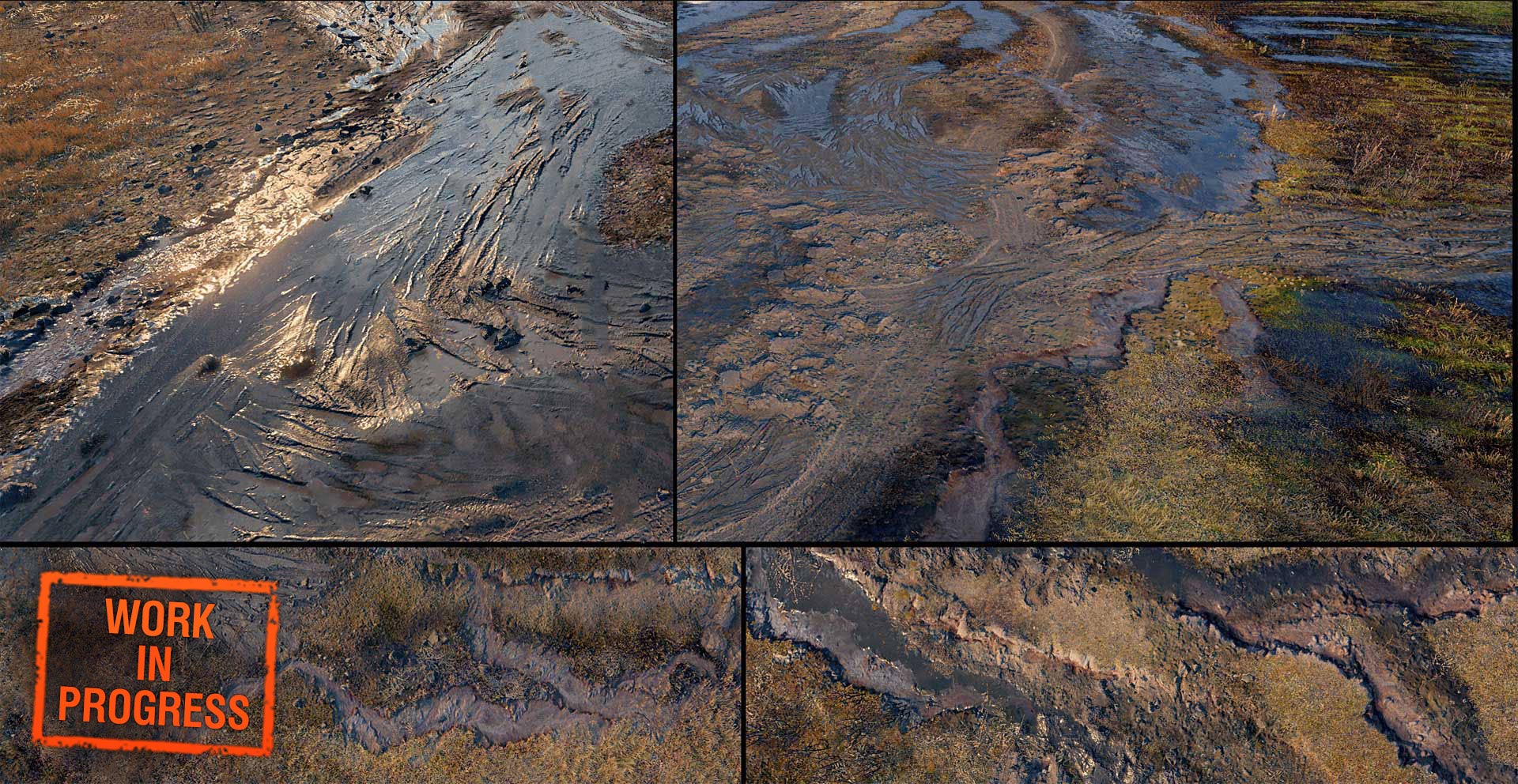 Which areas are open fields with a grassy surface? Can we implement a forest for cover? Where should roads be? Should they follow their real-life counterparts, or should they be adjusted? A given terrain influences the availability of certain playstyles, which can make them either an advantage or a disadvantage. Everything must be carefully considered to ensure that it doesn’t break the flow of a battle.

This is the reason why we don't have a minimum or a maximum amount of vegetation on maps. It is defined solely by gameplay and artistic aspects. In cases where the artistically-placed bushes and trees interfere with intended gameplay, we get rid of them. Most bushes and trees that provide 50% concealment are important for gameplay. They are denser, and light barely passes through. Bushes and trees with 25% concealment are generally more decorative. They don’t have as many leaves, and they can be somewhat burned or ruined.

One of the last steps in the pre-production phase is outlining the color scheme of the map. It's influenced by a number of factors, and there are various ways to “color in” the given terrain, depending on the season we're aiming for, the state of destruction, the time of day, and much more. There's also a gameplay aspect to it. 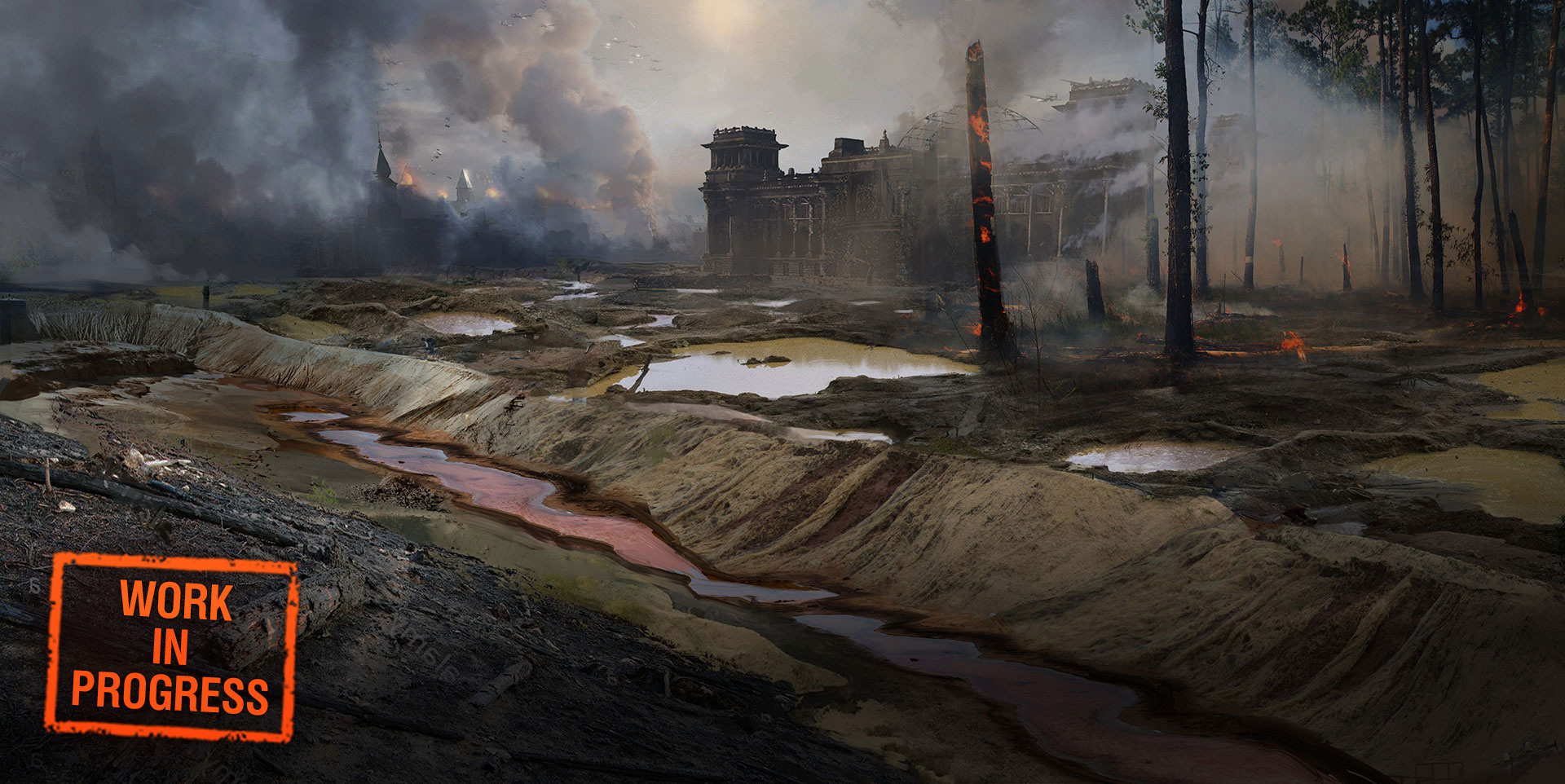 Dividing the different areas with subtle changes in tone and color can make it easier for players to recognize where they are, and the locations of their team and enemies. Imagine we want to distinguish an area with fields and hills from a similar one on the opposite side of the map. In order to create a white/light grey tone, we can add a bit of snow, maybe lighter-colored gravel, or even a house with white paint. At the same time, its counterpart would be kept as dark green and black, maybe with burned trees. This creates a certain atmosphere and helps with orientation.

Once the pre-production phase is completed, and the map has its final shape and form, at least on paper, the production phase begins. That's when all the concepts, ideas, and carefully created layouts and sketches come to life and enter their final form. The development of the map can take another three to four months. Then everything is meticulously tested during the QA phase to ensure every player can enjoy a fantastic experience on the new map.

The Berlin map was introduced in Update 1.9.1. Get to know Berlin like the back of your hand with the original announcement detailing gameplay features, and our very handy how-to-play video.