Tier X vehicles, get ready to display your mastery! The 2019 Season of Ranked Battles brings some new surprises!

This Season, the core gameplay of Ranked Battles has received a considerable revamp. Thanks to your feedback, we’ve reworked the ranking mechanics and the progression system, making them more achievable and enjoyable. But one thing remains unchanged — you can still earn tons of rewards and additional prizes, including the incredible Kampfpanzer 50 t—a unique Tier IX vehicle!

However, please note that in order to ensure the matchmaker functions correctly with a limited population, Ranked Battles will be available ONLY on the HK periphery for this Season. We've also optimized Season prime time to reduce in-game queues and create the most dynamic competitive environment possible.

Rise to the challenge, rework your loadouts and begin your battle journey through one of the most exciting modes in World of Tanks!

There will be two Seasons of Ranked Battles, one in 2019 and one in early 2020, with heaps of rewards and other bonuses. Depending on your results across both Seasons, you can earn the ultimate reward — the Kampfpanzer 50 t, an exclusive Tier IX German medium tank.

In order to maximize your battlefield experience, we revised the entire ranking mechanic: players start by playing a Qualification round comprising 20 battles, and then make their way through the ranks in 3 Divisions. Both victories and defeats will be counted in your personal standings.

Each Division consists of 10 Ranks. Progression through them is linear from the 3rd to the 1st Division, and you cannot be relegated from your Division to a lower one. 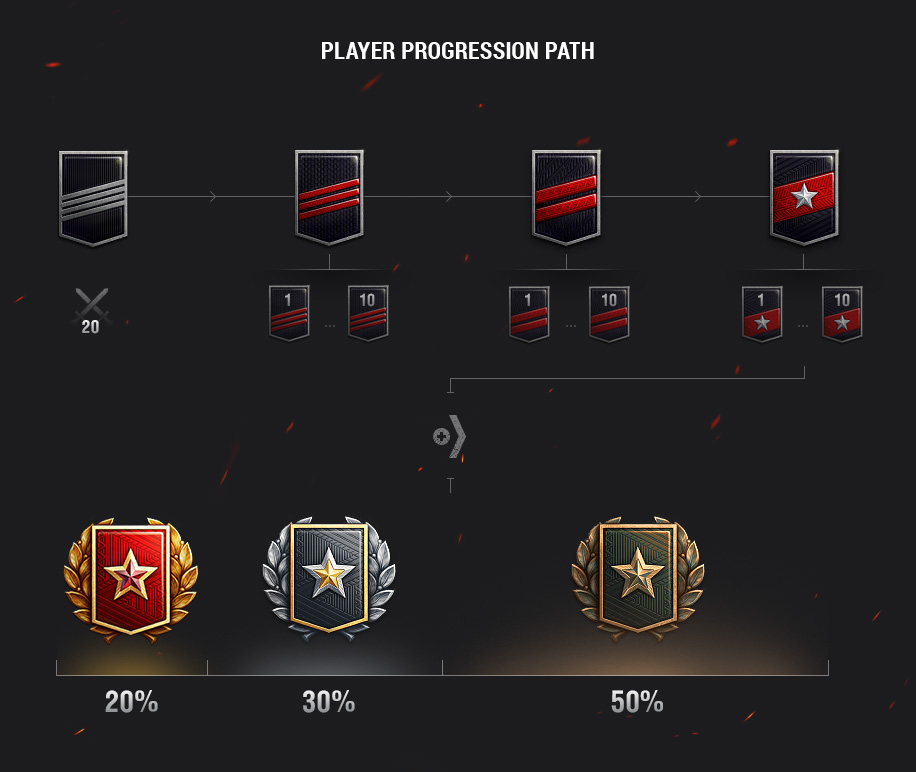 Once you have cleared all Ranks in the 1st Division, you will find yourself in one of three Leagues based on your performance.

All players who have made it to the Leagues may be matched with each other, regardless of the League they are currently in. For example, a player in the Bronze League has every chance to be matched against a player from the Golden League.

We have added permanent Ranks to each Division. Once you have reached these Ranks, you will no longer be relegated to lower Ranks if you lose your Chevrons. 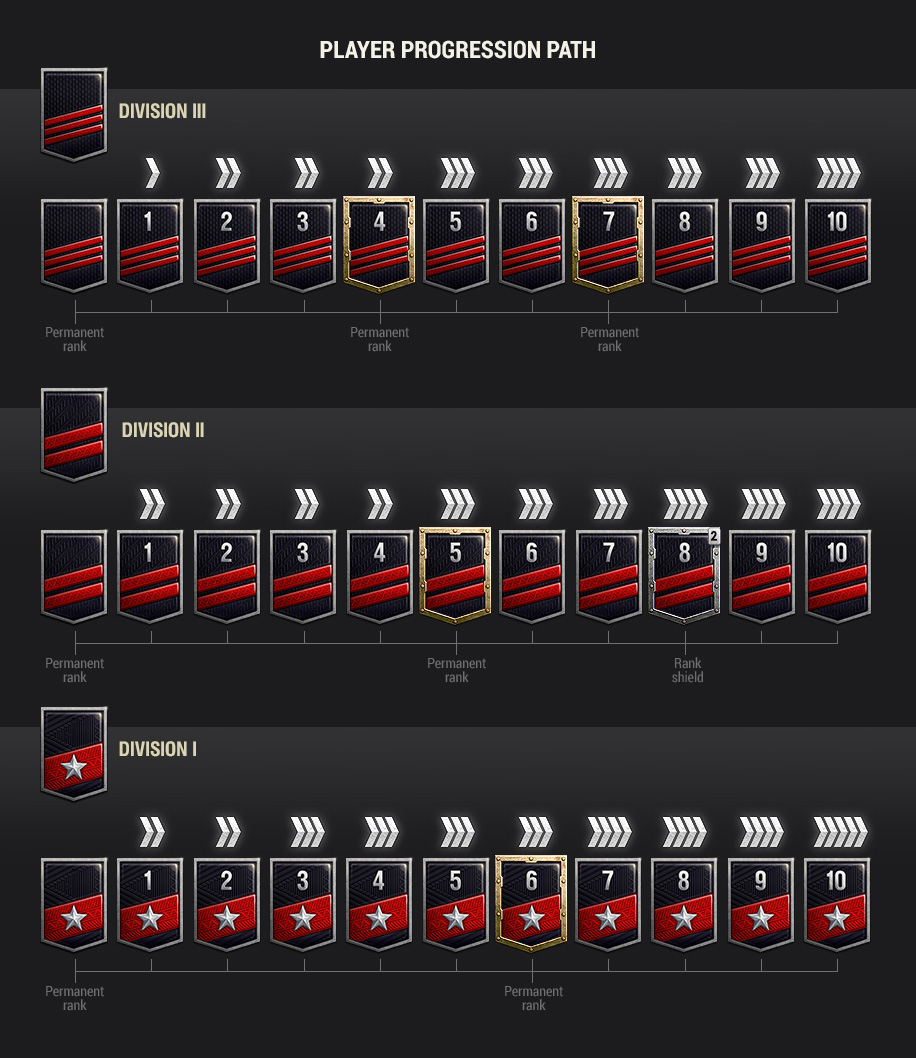 All these changes in progression will simplify your combat journey and help you reach the top of the ladder faster.

Speed Up Your Progress!

Want to progress through the Ranks even faster? No problem! To speed up your progression, we’re introducing a new mechanic — Bonus Battles. This is an equivalent of the First Victory daily multiplier, which automatically doubles the number of chevrons earned (two instead of one, four instead of two). If you don't receive a chevron after the battle, then the Bonus Battles mechanic doesn't apply.

As you move from one Division to another, a certain number of Bonus Battles will be awarded. This number depends on how well you’re performing and on how effective you are in battle.

* This is the main parameter demonstrating how effective you are in Ranked Battles. The fewer fights you lose and the more chevrons you get for each battle, the higher the value of your effectiveness.

** These Bonus Battles will be added at the start of every Division.

Much of your feedback on Ranked Battles concerned the distribution of experience in battles, and we’ve taken measures to improve it. In the new Season, we’re retiring the mechanic where you earn experience through your battle activities. This mechanic will be replaced by a new system of role experience that rewards players for properly fulfilling the role of their vehicle, depending on its class.

Let's see how this system will work using heavy and medium tanks as examples.

Learn more about other changes to the role experience system in the table below.

Primarily, the role of heavy tanks is to force fronts and hold superior enemies at bay. These slow, and in most cases well-protected, vehicles can block significant amounts of damage using their thick armor rationally.

A role for universal heavy tanks. Though such machines usually have thick frontal armor and are able to push the attack on a flank, they are also fairly mobile so can quickly change their direction to come to the aid of the team.

A role for medium tanks with mediocre armor but reliable guns and high mobility. These vehicles play confidently as support vehicles on the second line of attack. They engage in close combat with isolated targets, when it is possible to outflank them, and often get the first shot right thanks to their mobility and relatively good concealment.

A role for multifunctional medium tanks with rational front and turret armor, and for slow, well-armored medium tanks. These vehicles can effectively cover the Defenders on the first and second lines.

A role for tank destroyers or magazine-loading heavy tanks. Despite low comfort in shooting, these vehicles boast great firepower and can be extremely supportive to Defenders when holding enemies and forcing fronts.

A role for tank destroyers with powerful guns equipped with HESH shells. Their guns are pretty slow and not accurate enough to deal consistent damage at long range, and its mediocre armor forces these tank destroyers to take position behind their more thickly armored allies.

The amount of experience earned for this role depends on the distance between you and the enemy. The lower the distance, the more experience you earn for the damage dealt. You will not earn Role Experience for damaging enemies at a distance of 445 meters or greater.

A role for ambushing lightly armored tank destroyers that have great concealment and accurate guns to hit targets at long range.

The amount of experience earned for this role depends on the distance between you and the enemy. The greater the distance, the more experience you earn for the damage dealt. You will not earn Role Experience for damaging enemies at a distance of 100 meters or less.

A role for classic light tanks—vehicles with great concealment and view range, the primary task of which is to spot enemies and hunt down isolated targets. Tracked scouts can effectively assist their allies while remaining completely unseen.

A role for wheeled light tanks. These vehicles are incredibly mobile but cannot boast a great spotting range. Their concealment, and wheels that cannot be destroyed like classic tracks, enable these scouts to move dynamically across the whole battlefield, helping their allies.

A role for SPGs that can deal massive damage and stun enemies with their HE shells in artillery mode.

You will earn Rank Tokens for passing each Division and getting matched into Leagues. The number of points for both Seasons required to receive the final rewards are as follows.

All tokens that you've earned will be saved for the next Season!

Now to our sweetest topic — your rewards for excellent performance in combat! You have the opportunity to earn: 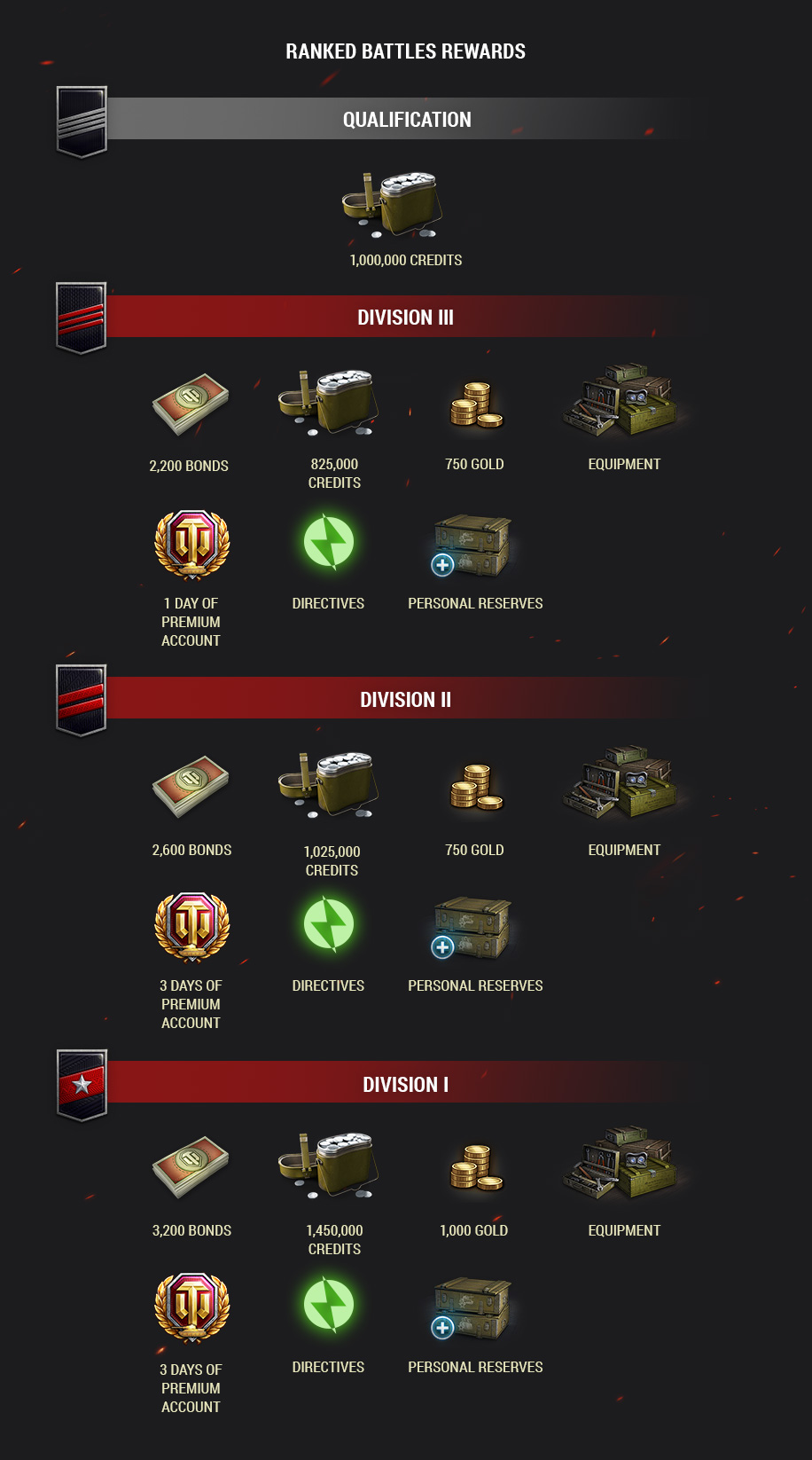 Depending on your results through both Seasons, you can earn the ultimate reward: the Kampfpanzer 50 t — an exclusive Tier IX German medium tank. You can only get it by playing in Ranked Battles. It’s a maneuverable status vehicle with well-sloped armor, great dynamics and a good combination of alpha damage and DPM. One of its most striking features is its extravagant design, which is unusual for German tanks.

We're also adding a special reward for Sprinters—players who progressed through all the Divisions and ended up among the first in one of the three Leagues. The first 20 Sprinters will receive the Golden League prize, regardless of which League they are in. In the ranking of players by League, Sprinters will be indicated by a special icon.

This is the most anticipated and valuable reward, given at the end of all Seasons to the most experienced and dedicated players.

Depending on the Division or League you are in when the Season ends, you get Rank Tokens. At the end of the year all Rank Tokens obtained in all seasons are summed up.

The more Tokens you collect, the better Annual Reward you will receive:

Violation of the Game Rules and Penalties

Prove your worth over a series of Seasons, climb your way up to an exclusive Tier IX tank, and earn tons of valuable gifts along the way! This year, Ranked Battles promises to be more enjoyable than ever, so get ready to start your new tanking journey!