It’s about few days until the Armageddon event starts. Here are the detailed regulations of the event.

All clans could take a part in the event - as already existing and created after the event began.

1.2   Below you could find key features of the game event and differences from the map with standard rules:

Armageddon event will take place on the basis of consistent quests, each clan distinguished individually:

2.1.1 When the map is open, the clan will be offered to select a reference prime-time, where it will operate. Only Commander and his Deputy could choose prime-time and only at the beginning of the first quest. At that clans will be able to carry out their activity on the Global map without accepting any of game quests. During the event a clan could choose a quest any time.

2.1.2 After reference prime-time is chosen, landing province will be assigned to clan randomly, which will be the first step in the quest. In this province there will be Control Center.

2.1.3 Since the reference prime-time was confirmed by responsible clan person, the clan is considered to start the quest quest.

Note: The same province can be a starting quest province for several clans. Thus, each of them will receive their individual tasks.

2.1.4 The first stage considered as completed if a clan won landing tournament and established his Headquarter on landing province. To complete the task a clan has 36 turns after getting a task.

2.1.5 The first stage is considered as failed if:

If a clan fails first stage, it will be given new task from first stage right after one of the mentioned points occurred.

2.1.6 If a clan succeeds in the first quest - land on the Map, capture Control center and creates its Headquarter, the clan gets the next quest – capture a province on which Belluzzo wheel will be able collected. This province will be selected randomly from the amount of provinces bordering with province with Control center. The target province for this quest may be assigned within +/- 1 hour different from the reference prime-time. If the target province is a landing province as well, a clan must submit an application to participate in landing tournament and win it to capture the province. The province will be considered as captured after a clan put a Headquarter on it. To perform this task a clan will have a limit of 36 turns.

2.1.7 As soon as a clan moves headquarters from the province with Control Center to the province with Belluzzo wheel, next quest province will be opened - Launching pad, which borders with province where the Belluzzo wheel situated and it will be selected randomly. Clan need to capture the Launching pad and move on it the Headquarters. The target province for this quest may be assigned within +/- 1 hour different from the reference prime-time. If the target province is a landing province as well, a clan must submit an application to participate in landing tournament and win it to capture the province. The province will be considered as captured after a clan put a Headquarter on it. To perform this task a clan will have a limit of 36 turns from the moment of accepting the task.

2.1.8 Capture Launching pad provides an opportunity to move to special event area - New Swabia. To move to New Swabia a clan must have not less than 15 chips.

2.1.9 Quest will be considered as failed if clan’s Headquarter will be lost and will go to the reserve at any of stages. In this case, a clan will get new task of the first stage even if this clan owns provinces on the map.

2.1.10 If a clan runs out of time and did not to move the Headquarter to captured quest province, new similar task will be given - new province will be randomly selected, bordering with the province where the Headquarter of the clan situated. At that this clan starts task progress from the point at which it was stopped.

2.2.1 New Swabia is a special event location where clans will be able to start proceed with the implementation of main goal of event. The only way to get to New Swabia is through Bridgehead, which becomes available only after the Launching pad is captured.

2.2.2 A clan captured the Launch pad will be automatically removed from the Map at a fixed time - 08:00 (SGT). All of clan’s chips and Headquarter will be sent to reserve and will remain active. After that, the clan will be automatically directed to the landing tournament on bridgehead - the province that are on the perimeter of Secret complex, which consists of Reactors and Spaceport. Clan points for capturing bridgehead charged only at the first landing on New Swabia.

2.2.3 If the clan has been defeated during the bridgehead tournament stage, or was knocked from the provinces of New Swabia, the clan will be automatically directed to a landing on the bridgehead. The number of attempts is unlimited. In case of a draw in battle with owner, the province will go to attacker clan.

2.2.4 After capturing bridgehead, a winner will have the possibility to attack Reactor – a part of secret complex, which provides clan Fame Points for its capture.

2.2.5 The main goal of the event is to capture Spaceport, which is surrounded by the Reactor provinces. Owning Spaceport, clans are able to capture the rest Reactors and get Fame points with increased coefficient of x4. By itself capturing the Spaceport will not provide extra Fame points.

2.3.1 Clan Fame Points can be earned not only by fulfillment of its quest tasks, but also creating obstacles to competitors.

2.3.2 Following additional missions will be available for completion: 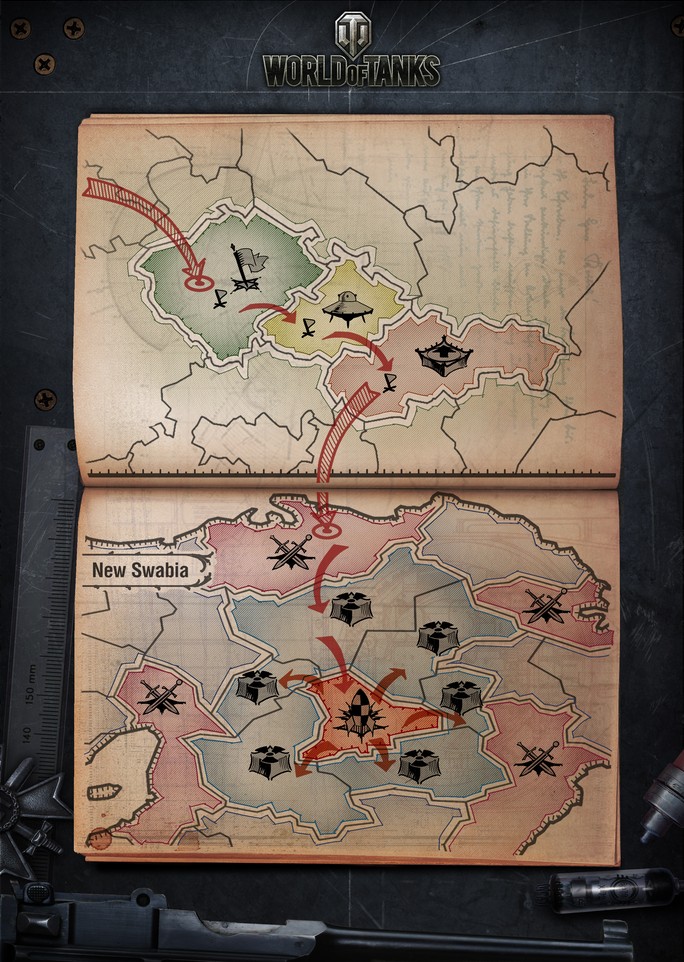 "Fake" battles are in violation of the regulations and will be punished by a complete Fame points wipe or blocking offender game account.

In case of dispute on scoring the Fame points (suspected "fake" battles and etc) administration of the game has the right to request a battle replay, screenshots and other information relating to this situation. If the requested information is not provided, the decision will be made at the discretion of administration. We strongly recommend you to turn on the replay recording option in game settings.

Please refer to the forums for additional information on rule violations which will be announced before the event begins.

3.1 Carrying out game tasks and participating in regular battles, clan gets Fame Points according to the following conditions:

Information about points clan gathered will be available in next turn after their receiving and will be updated every hour. If a clan having chips on territory don’t enter the battle, after the second time of absence the clan will be fined in the amount of 10% of total clan Fame Points amount for each subsequent time of ignoring the battles.

3.2 Personal Fame Points will be awarded based on the following formula:

EXP – average experience a clan got in each battle. Experience counts without premium account coefficients and actions bonuses.

QPC – battle coefficient, which depends on whether the province is aimed for the clan.

Battle coefficient, which depends on whether the province is aimed for the clan (QPC)

If a clan is left the map, clan and personal Fame points does not wipe.

4.1 The main reward for participating in the event will be 600 premium tanks of VIII tier ISC-5 (object 730), which will be charged according to the following conditions:

4.2 Top clans of the Event will be awarded with licenses for tank. Licenses for free tank will be distributed according to clans position in general clan rating.

4.3 Premium tank will be awarded to players who scored the highest number of personal Fame points in the clan and are in the top 1600 player by Fame Points. An exception will be clans with 100 licenses – in these clans tank will be charged to all players of the clan, if they are in top 1600.

Note: To get a tank in clan, which has a license for it, you need to be this clan member for at least 5 days.

4.4 Players who hit the top 1600 players by the number of personal Fame points, but are not among the players in the previous point, they will be able to buy a premium tank IS-5 (object 730) for 12 000 gold until July 15 2015 inclusive. This possibility applies to players without clan affiliation. Such possibility to buy the tank will be possible only through the event map interface.

Medals " Soldier of The Last War ", "Top Secret" and " Watchman" will be credited within 1 day after the battle. The rest of the medals will be awarded on the basis of the entire game event.