Something big is coming to Clan Wars. On 30th August 2014, the great wolf Fenrir will swallow up the Sun, and the legions of Light and Darkness will engage in an epic war. Only the best warriors among you can complete the challenges and earn the right to fight alongside Odin in the last battle against absolute evil to prevent the end of the world.

The World of Tanks team is proud to announce the new game event “Twilight of Gods” which will be launched soon. We hope the fusion of Scandinavian mythology and powerful tanks will provide outstanding action and fun to all clan players! Besides the available gold rewards and unique medals to be earned (specially designed for the event), a new Premium tank reward will be up for grabs. 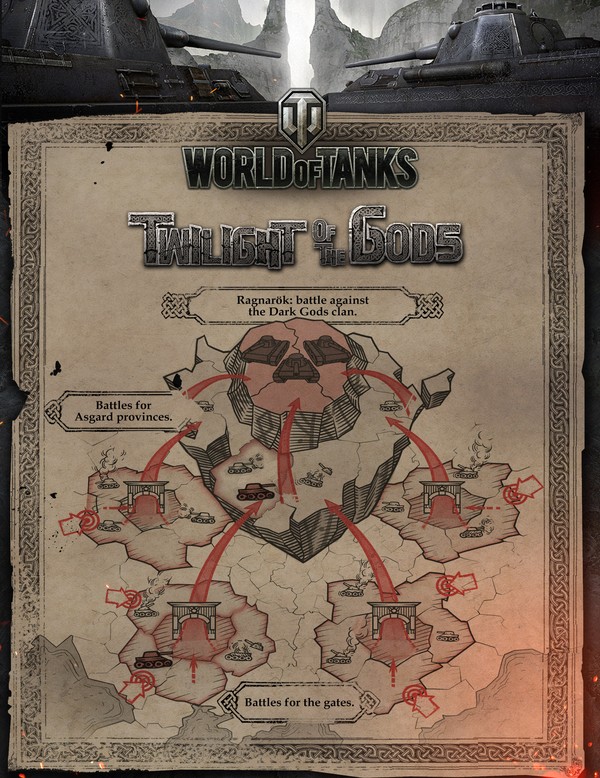 The event map designed for “Twilight of Gods” will launch on 29th August 2014.

Under World Redivision, the following actions will be implemented:

During the event, clans will have the option to leave the Global Map entirely.

The "Twilight of Gods" event will last for 10 days (excluding the World Redivision mode). Only vehicles up to Tier VIII will be able to participate.

Similar to past events, all clans who will participate in the event will receive Victory Points according to their performance.

The top 5 clans by Victory Points will get gold at the end of the event:

All players who take a part in “Twilight of Gods” battles will also receive Fame Points. At the end of the event, the top 100 players in the Alley of Fame will be awarded with the Chinese Premium heavy tank 112.

Additionally, players who manage to take places from 101 to 600 in the Alley of Fame will receive the American Premium medium tank T23E3. If a player already has the tank in the garage, he will instead get a compensation of 7,000and 1 garage slot. [UPDATED]

Note: The US medium tank T23E3 is not a special clan tank. In future, it may be used in game as another event reward or as a purchasable premium vehicle.

Clans who participate in the event will have the opportunity to get unique medals:

More details, including the General Regulation of the “Twilight of Gods” event will be published on the official portal soon. In the meantime, join a clan now to prepare for the event, or recruit more members to strengthen your clan and build up your Stronghold.

Watch the Brothers in Arms video