Announcements
In other languages:

A minor patch for version 9.15.1 is scheduled for 11th August. It will fix the interface and other bugs that surfaced after the update. Thanks to the feedback received from players, the development team has found out and fixed the disclosed problems in short terms.

Important! After the release of the micropatch, the file structure of the game client will be changed. As a result, third-party modifications for version 9.15.1 will not work for some time. In order to avoid technical problems, the game client will change the main folder for modifications. It is strongly recommended that players refrain from installing mods and instead wait for the most updated versions of those mods, which will be adapted to the current version of the client.

There are many players who use different client mods. We would like to remind you that these modifications are not created by Wargaming, but rather by third-party developers and users. So, whenever there are official World of Tanks updates, conflicts can occur if your game client has modified files installed. Examples of such issues include decreased game performance, freezes, crashes, missing textures, and more.

In most cases, such problems can be solved by deleting the mods. However, sometimes, a clean reinstall of the game is needed.

Important: Wargaming is not responsible for game-client issues due to the use of modified files.

We would like to remind you that there is a way to turn game modifications on and off. If you have any problems, try to run the game in safe mode: 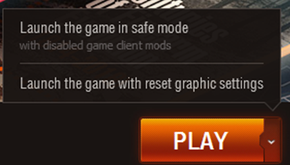