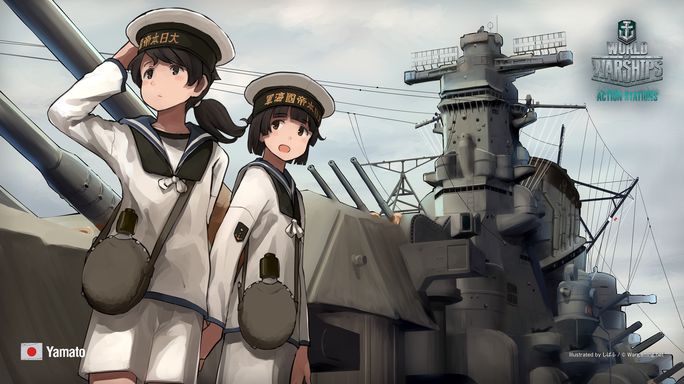 Illustration Column III: Sisterhood of Steel feat. Shibafu is a collaboration between World of Tanks and popular military illustrator Shibafu.

This special third illustration will feature the iconic battleship Yamato, to commemorate the official launch of Wargaming.net's new title, World of Warships!

There are wallpapers available this time, too! Download the image of the legendary battleship and liven up your desktop!

Many historians agree that Imperial Japan's greatest battleships were the Kongo-class, and of course the Yamato-class. In fact, it is not an exaggeration to say this is a ship everyone in Japan recognizes even today, including those who are not interested in military history. (Although it may often be mistaken for a spacefaring battleship with a similar look and name in a certain anime series...)

However, during the war, very few people in Japan knew the existence of Yamato or her sistership Musashi. The Yamato-class ships were the Imperial Japanese Navy's trump cards, and their secrets were well-guarded even during the construction. In order to prevent a quick-witted observer from guessing the scale of the ship from her budget, part of the project's budget was entered into financial logs as construction fees of non-existent destroyers and submarines.

Yamato is often described as the "world's largest battleship," but what exactly is the definition of large?

The Yamato and Musashi were also the only ships to ever mount the gargantuan 46 cm (18 in) guns, which were 45 calibres in length. These were some of the most powerful guns in the world at the time. Of course, the Iowa-class had 40 cm gun of 50 caliber length, which had comparable levels of firepower. Either way, simply based on specifications alone, it is safe to say the Yamato was the most powerful battleship ever built.

The existence of the Yamato-class was finally revealed after the war. To their defeated and war-torn nation, the fact that their nation built the world's largest battleship gave hope to rise from the ashes.

That said, world's largest does not necessarily mean world's strongest. The comparison of the Yamato and Iowa-classes is a never-ending controversy among military enthusiasts.

The answer may not be so clear-cut when discussed in terms of specifications and historical events. Why not decide for yourself in World of Warships?

For personal use only. Unauthorised redistribution or reproduction of the wallpaper is forbidden.