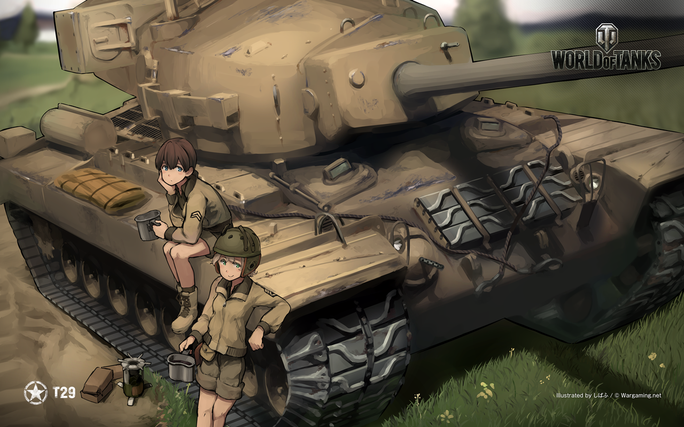 A new World of Tanks collaboration with popular military illustrator Shibafu is starting! A vehicle will be introduced with each issue along with attractive characters in this new illustration column Sisterhood of Steel feat. Shibafu.

The first illustration is the American T29, which Shibafu himself is fond of in the game.

Due to popular request, we’ve created wallpaper versions of the illustrations which you can display right your desktop! Enjoy!

--- The Hunter That Arrived Too Late

When the US Army was tasked with retaking Europe in World War II, they developed the M26 Pershing to deal with the threat of the German heavy tanks. The 45-ton M26 was a potent weapon against the Tiger I, but when it came to the 70-ton class Tiger II, the M26 felt lacking. And so, in March 1944, a 60-ton class T29 heavy tank was conceptualised and officially approved in September.

The torsion bar suspension as well as the general arrangement of the hull armor was taken directly from the M26, but the T29’s upper glacis plate was further sloped to 54 degrees. Also, in order to incorporate the 105 mm T5E1 tank gun and a coaxial 12.7mm machine gun, a large cast turret was adopted. A wide 2,032 mm. turret ring was required to mount this turret and the hull was extended to make room for it.

A distinguishing feature of the T29 is the thick turret armor. The mantlet, which tends to get hit the most, has an armor thickness of 279 mm. Even the back of the turret has as much armor as the hull at 102mm. Due to its ill-balanced look, it might look like a puny knight in oversized armour, but the fact that it had no major reliability issues shows America’s engineering prowess.

While the T29 was in production, Germany’s surrender came to pass. Because of this turn of events, the T29's role was subsequently shifted to assaulting bunkers during the planned invasion of the Japanese mainland and the order was drastically cut down. When Japan surrendered, the vehicle became classified as a technological demonstrator, with production being cancelled after several vehicles were produced in 1947. On the experimental vehicle T29E3, the T31E1 rangefinder can be seen protruding to the left and right. This vehicle also mounted the T93E2 sight and a updated periscope. The stereoscopic rangefinder had a base length of 2.7 m and was operated by the commander, who would calculate the distance and the direction to the target. However, the muzzle blast would often decalibrate this delicate equipment, so it was considered unfit for an actual engagement.