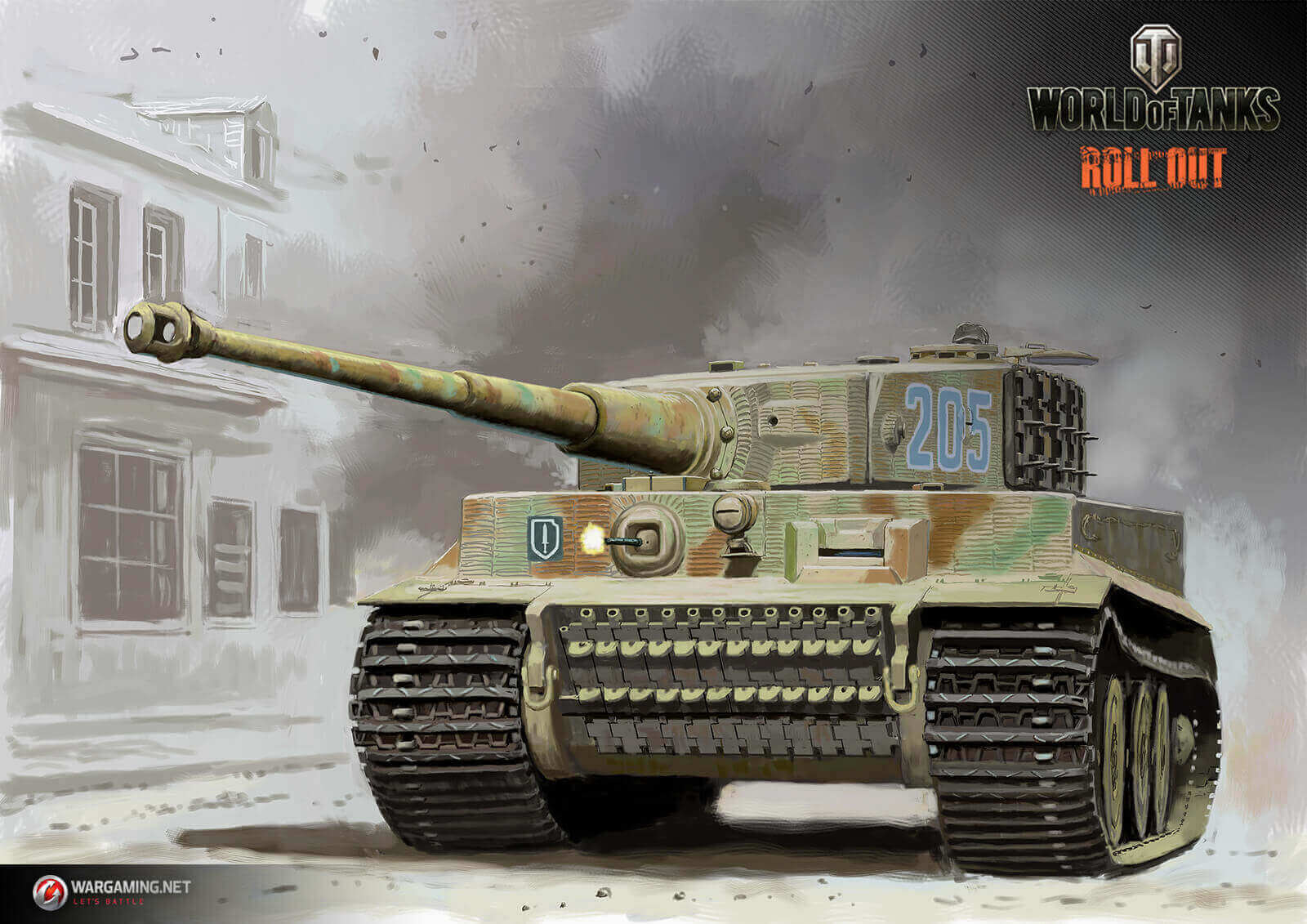 What tanks do popular Japanese illustrators and famous manga artists like? You can find out in this illustration column “My Favorite Tanks,” where the artist presents us his or her favorite armoured vehicle!

The second illustration column series has reached part 12, the last of the series. This final column is by artist Motofumi "Genbun" Kobayshi. Enjoy the legendary Tiger I by the masterly illustrator!

It was a very long time ago, when I was middle school student - even before I knocked on the doors of the aritst, Ritta Nakanishi, to try to become his apprentice - that I learned of the Tiger, or should I say Wittmann.

It was in the military magazine called “Maru” from the Showa 30’s (1955-1964) which I bought in a used book store in front of the Kawasaki Daishi Station (or at the street in front of the Kawasaki Station) that had an article on the Panzermeyer and other soldiers such as Michael Wittmann. The article wrote about the Battle of Villers-Bocage, and stated that “SS-Obersturmführer Michael Wittmann on the Tiger tank single handedly destroyed a brigade group of British tanks.”

I’ve been seeing the “Combat” show, which was aired on a different channel when baseball was on TV. There were other 30-minute documentary shows like “Forefront,” which featured the voices of soldiers from both sides of the Italian front in WWII. I started wondering what the “SS” was at around the age of 10, while watching those shows, and I finally had the answer in front of me with this magazine. I’ve read about the arrest of Eichmann on an extra issue, and I’ve also seen the documentary film “The Nuremberg Trials” and knew about the Holocaust and the Nazi war crimes, but to the introverted young boy I was, these things made my curiosity bloom.

Nowadays there are plenty of military references, but back then there was very little, maybe the Reader’s Digest article on the “Longest Day” with the stylish American illustrations, and a few translations from Japanese companies such as the “Battle of the Bulge” from Hayakawa and the “Last Battle” from Asahi Shimbun. I went wild with joy when I was finally able to watch the film version of the Battle of the Bulge at the Tokyo Theater, which no longer exists today.

I gained interest in Wittmann and started researching the number of vehicles destroyed by Wittmann and started listing it chronologically, through bits and pieces of records on various articles. Dainipponkaiga Company released a full record of Wittmann’s kills, and it closely matched my record so I went on to produce a comic on Wittmann, which became “Death of the Steel.”

The vehicle towed out of the village postwar was the Tiger 231, and the photo of this vehicle was initially captioned as Wittmann’s Tiger, and later disproved. So, what happened to Wittmann’s tank?

A photo together with Witmann’s gunner, Balthasar Woll, was taken right after the battle. Woll obtained a Knight's Cross of the Iron Cross for his actions in Russia, was promoted, and became a Tiger commander, but did not make it back to the frontlines. In the official record and in the comic, Woll says to Wittmann, “They think they’ve already won,” and Wittmann replies, “Let’s teach them a lesson then.” A pretty cool line, but it’s actually a fabricated conversation meant as German propaganda.

...many questions come up in my mind.

The Tiger tank was hastily developed to counter the threat of the T-34 and KV series tanks in the Soviet, and put into service by the winter of 1942, in the Leningrad front. The famous 502nd Heavy Panzer Battalion tank ace, Otto Carius is the most well-known Wehrmacht tank commander, but Wittmann in the Waffen SS performed better than Otto Carius in terms of the number of vehicles destroyed. Otto Carius retired from the army and started the Tiger-Apotheke after the war. There was a plan to invite Otto Carius to a military event in Japan called the “Victory Show,” but it was unfortunately cancelled due to his age.

There was a Wittmann Medal in World of Tanks a while ago, but it was renamed and deleted due to political reasons. A sad thing, in my opinion.

I think that if Germany mobilized earlier, it may have been able to build the Tiger tank before WWII started. What do you think?

There were several variations for the Tiger I tank: early, middle and late production models. Wittmann’s Tiger was of the latest production model, and you can tell by observing things such as the splash guard on the turret ring.

There are also many things about the Tiger that still remain unknown. For example, launch tubes were placed on the turret roof of tanks and assault guns for what is said to be S-mines beginning from 1944 onwards. Black powder was put under the S-mine in the tube, and by hitting the bottom of the tube, it was to be fired, but there are very few if any photos of these launch tubes actually being used. Maybe the mortar on the Israeli Merkava was inspired by the S-mine launchers on the Tigers.

Another peculiarity is the number of smoke dischargers mounted at Kursk in 1943; there are no detailed photographs of the smoke canisters. It is quite exciting to do research for the illustrations on how these war machines were used in extreme situations. Compared to a lot of people, I’m not an avid tank enthusiast or a military enthusiast. I’m just researching weapons and history in detail to draw realistic pictures.

A celebrated Japanese military illustrator and one of the most famous artist in gekiga-style graphic novels with war themes, Motohumi "Genbun" Kobayashi is well known for The Black Knight Story as well as Apocalypse Meow, and has created his own publisher Kampfgruppe Genbun to publish his works.

Mounting the astonishing 8.8 cm KwK 36 L/56 and protected by 100mm of frontal armor, the German Tiger I heavy tank has taken the heart of many tank enthusiasts as the superweapon of World War II.

Of course, there were several tanks stronger than the Tiger I by the end of the war. If you think of the effectiveness of weapons as the contribution towards victory, the Tiger suddenly loses its bragging rights as Germany eventually lost. To put it in Word of Tanks terms, what makes the Tiger amazing is the fact that Germany was able to field a Tier 7 heavy tank in 1942, when the allies were still using Tier 4-5 tanks. In the game, a two-tier difference might be something tankers are used to, but in a life-or-death situation in real life, it is outright brutal. And that was how the Tiger felt like to the allies.

At the same time however, the appearance of this heavy tank showed that Germany was falling short of victory. As the term “Blitzkrieg” signified, the German Army’s early victories were possible by focusing speedy lightly armored vehicles to disorient the enemy forces. However, occasional defeats to French tanks as well as the appearance of the T-34 shocked the German Army. The creation of a heavily armored tank with a powerful gun, as well as the fact that emphasis was placed in putting this tank into production was in itself proof that the German strategy was changing.

Although there were differences depending on the period during the war and the state of affairs, only a select few units in the German Army had access to tanks. Generally, only elite armored divisions were able to wield tanks, and each division, which was the smallest single operational unit, had around 15,000 men. The German Army placed 135 divisions when attacking France in 1940, but of the 135 divisions, only 10 were panzer divisions. Tanks had to be used by units with special equipment and training.

Even these elite panzer corps could not wield the Tiger heavy tanks. The primary tanks at the time, the Panzer IVs, weighed around 20 tons each, so Tigers, which weighed around 54 tons, were only a hindrance. And so the German Army created and trained specialized heavy tank battalions along with the Tiger tanks. A heavy tank battalion was composed of 45 Tiger heavy tanks and support equipment, and were commanded directly at the higher army corps level. They were deployed in strategic locations and temporary placed under the command of the frontlines. These heavy tank battalions would have been highly effective if used in concentration, but in most cases they were used in company (14 vehicles) or even in platoon (3 vehicle) level operations, and were spread all over the frontlines.

Most people probably imagine Tigers as spearheading an attack, but in reality, they were almost never used in that way. The 54-ton heavy tank could not cross many bridges or swamps, and so operating the Tiger required extensive reconnaissance of the terrain, and so it was more effectively used to defend known territory than to invade previously unknown areas.

But these are issues at a strategic level. In a tactical level, such as what is seen in a game of World of Tanks, taking risks to spearhead an assault can be effective. Especially when you are a top tier tank, you can live up to the legendary image of the invincible Tiger tank.