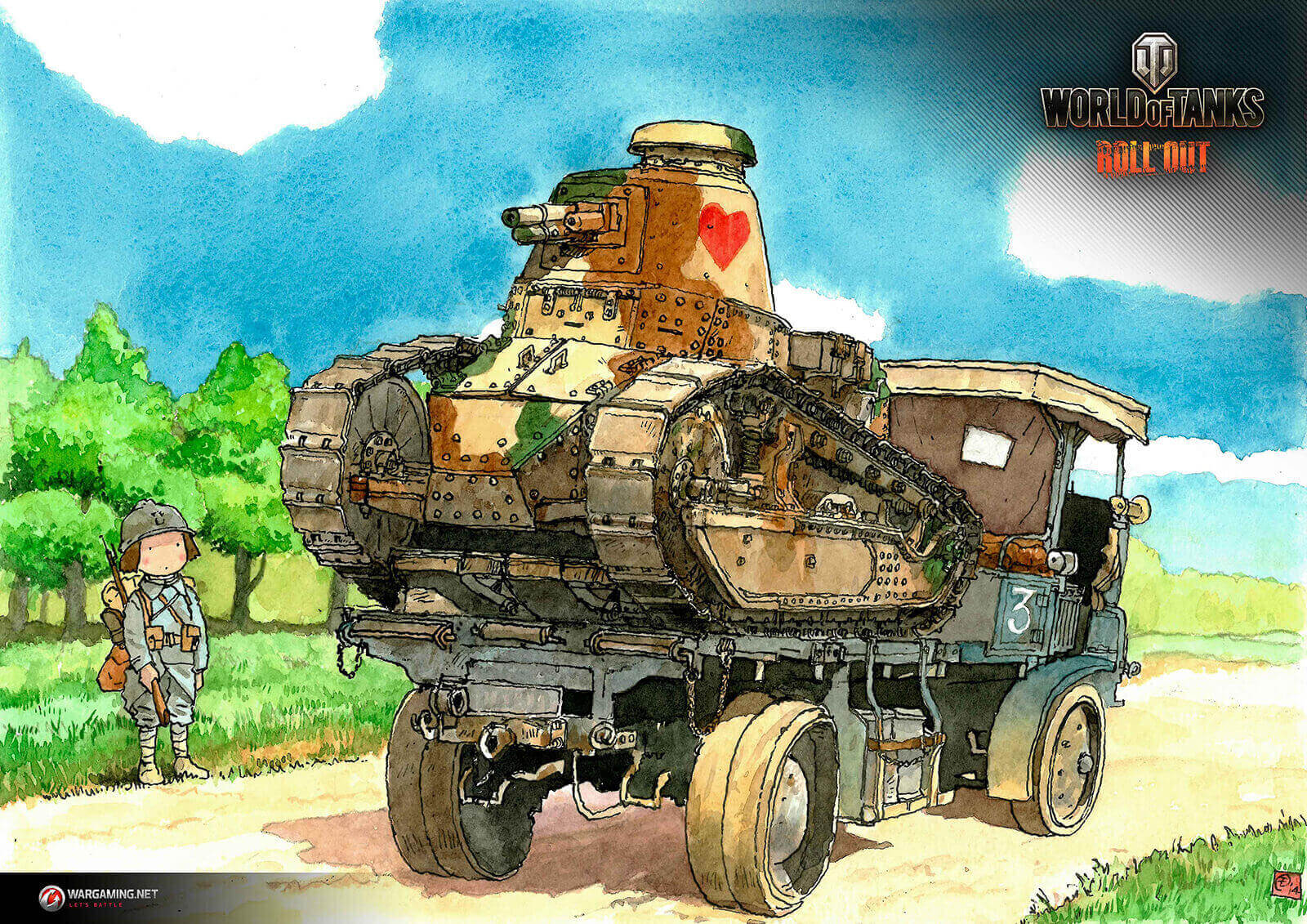 This time an illustrator famous in the Japanese plastic modeling scene, Yoh Morinaga brings us the French Tier I Light Tank Renault FT, with his unique detailed brushstrokes.

Watch the "Renault FT" leisurely traveling on the back of a truck!

Hello, I chose to draw the Renault FT as it is one of the oldest tanks in the game.

The early “tanks” all have a unique design and they are all intriguing, although whether I want to ride on one is another matter. The riveted machinery with signs of the trial and error that went into making them fascinates me. (In that sense, the Renault FT had a futuristic design that can still be seen in present day tanks.)

When you look at this thing in photos and reference books, this tank looks small, snug and cute, but when you look at it in real life, it’s bigger than you think and you’ll get a feeling it actually is a deadly weapon.

About the Artist – Yoh Morinaga

The first tanks to be deployed in battle were the British Mark I rhomboidal tank and its following variants of the tank, but the Renault FT is known for being among the earliest designs to incorporate a fully rotating turret on top of the vehicle as well as having a separate engine and crew compartment, features present on modern day tanks. Renault FT is indeed lighter at 6.5 tons, compared to contemporaries like the 13.5-ton Schneider CA or the 23-ton Saint-Chamond. It has long been said that “FT” stood for faible tonnage (low tonnage), but recent studies suggest "FT" originated from a product code within Renault, but the true origins of the two letters remain unclear.

The developer of the vehicle was Renault, and the development was led by Colonel (and later General) Jean Baptiste Eugène Estienne, known in France as the father of tanks. After completing trials in February 1917, 150 vehicles were ordered in the following month. The initial batch of FT17’s had mixed cast/pressed as well as riveted plate turrets and a stable production was not been achieved until the improved FT18 variant was made with the cast turret. The Renault FT saw its first battle in May 31, 1918, and it participated in only the last half-a-year of World War I. Because of its advanced design, the Renault FT remained in service, while other tanks like the Schneider CA and the Saint-Chamond were retired immediately after the War. By the time an armistice was reached in November 1918, 3,187 vehicles have been built, and by the end of 1934, it increased to 3,499 vehicles. The production of the contracted vehicles continued after the War and over 4,500 vehicles were produced in the end.

Because there was an abundance of Renault FTs, the French Army was reluctant to develop new tanks throughout the 1920s. Even the modifications were all on the Renault FT such as the variant with the 37mm Puteaux gun, the Renault BS with the 75mm gun or the command tank Renault TSF.

But even then, the vehicle was becoming obsolete after a few years, especially in its lack of speed and off-road capabilities. And so, the suspension and armor were upgraded on the new Renault NC for the infantry. Distinct looking triple vertical coil-spring suspensions and vertical hydraulic shock absorbers were added, but these NC variant appear not as the French, but as the Japanese and Chinese Tier 1 vehicles.

This great tank is said to be the ancestor of the modern tank, but it also meant this is a very old design. It especially suffered from the lack of mobility. This tank also represents the unique French design philosophy, so keep that in mind when you are using one.