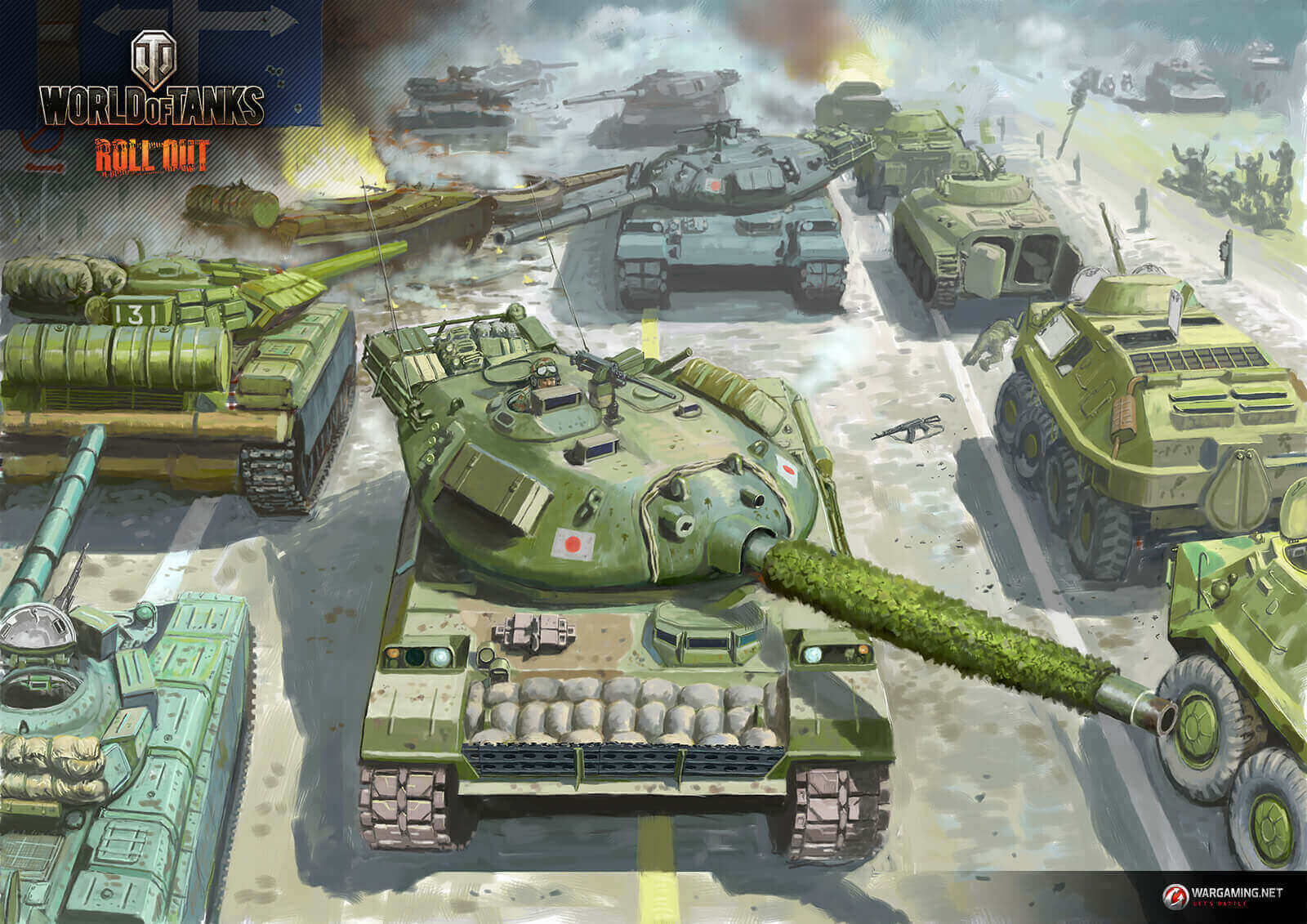 Welcome back to “Japanese Tanks in Illustrations!” The 15th and final illustration column will feature the most powerful Japanese tank in World of Tanks at the moment, the prototype of the Type 74 tank still in service with the Japan Ground Self-Defense Force, the Tier X medium tank STB-1, illustrated by Motohumi “Genbun” Kobayashi!

The Japan Ground Self-Defense Forces (JGSDF) started developing a next generation main battle tank almost immediately after the Type 61 was completed. This was the ST-B. While the Type 61 was more of a continuation of the techniques from the former Imperial Army merged with the technology provided by the Americans postwar and was by no means a cutting edge weapon, the ST-B was a more ambitious project aimed to fully utilize the world-class automotive and electronics industry at the time to catch up to the latest tank designs.

The international situation, however, was not so forgiving. The Soviets T-54/55 with a 100mm tank gun was being rolled out. The JGSDF, in attempt to address the Type 61’s lack of firepower, albeit the tardiness, wrote up plans to put a Royal Ordnance L7 105 mm gun on the tank.

The new gun would help with the firepower, but the requirements for a new fire control system, reduction of the rate of fire, the drop in overall mobility, which will accompany the replacement of the gun was thought to outweigh the merits of the additional punch provided. The plans to up-gun the Type 61 was scrapped and the ST-B was to be designed from ground up. The variant of the Type 61, with the 105mm be used in WoT as the upgraded gun on the Tier IX Type 61.

The development of the ST-B First began with the development and evaluation of each component. An experimental chassis called the ST-T was created, and the 700 hp 10ZF diesel engine, the hydropneumatic suspension, as well as the all-cast steel turret were tested on it. As indicated earlier, the 105mm Royal Ordnance L7 tank gun, the gun adopted for use in the US and Germany, and universally used in “the West.” The 105mm gun was thought to be difficult for an average Japanese person to handle, and an autoloader or an assisted loader was considered, but in the end it was dropped to cut costs.

The unique feature of the STB-1 compared to its peers is the impressive gun depression of -13 degrees using the hydropneumatic suspension. This is a great advantage of this vehicle when going hull-down, and it also allowed it to have great mobility on rough terrain. The downside of all this was that in between the road wheels and under the vehicle were a complicated system of oil pipes and hydropneumatic cylinders. This caused a lot of failures initially, and the development took a lot of time. Even after the problems were sorted out, the vehicle is said to be relatively vulnerable to anti-tank mines.

In WoT, the hydropneumatic suspension of the STB-1 is not visually represented, but it still has its very good gun depression. You will probably see why this vehicle is the highest Tier Japanese tank once you get a chance to drive one.

My favorite post-war Japanese tank is the Type 74. The Type 90, which came 20 years after the Type 74 is of course, much stronger compared to it, but the Type 74 looks more tank-like to me.

When the Type 90 came out, I heard from a JSDF officer involved in the development that it could land a perfect shot at ranges over 3,000m. It was developed after the American M1 Abrahams, so I guess it’s no surprise. The Type 10 tank is much lighter, but it’s even newer than these two vehicles, so I suppose the basic performance must be higher.

This illustration is based on a climax scene from Battle Over Hokkaido, a military manga I wrote. The protagonist is a commander of a Type 90 tank, but his vehicle gets destroyed by a Soviet anti-tank missile. The tank which the protagonist rides on is this Type 74 tank. I wrote the story that way, because I wanted my favorite tank, the Type 74, to see action.

This is the counter-offensive by the JSDF near the end of the story, where the JSDF forces defeat the Soviet Tank Corps spearhead heading from Otoineppu to Sapporo via Asahikawa. When writing the story, the 80s speculative fiction Team Yankee, where the struggle of the tank company commander was very realistically portrayed in a fictional World War III scenario. However, later novels by the same author were not as interesting.

I also had the image of Michael Wittmann in 1944 Normandy. I was sad to hear the Wittmann medal was removed from the game. I understand the need for political consideration, but as a lover of German military history as a whole, I was a little disappointed.

I finally got the E-100, and am currently working on the Panther line in-game. I’m working on the JS (IS) Soviet line as well. Oh, Japanese tanks..? Yes, I’m working on them, too, but the pitiful armor makes me want to cry. It’s like riding a tractor to a tank battle. As a Japanese, I’m very happy that Wargaming decided to add the Japanese tank line, but they are no match for tanks of other nations. Everyone must be clenching their teeth and going through some sort of tough spiritual training to be riding Japnese tanks. (I’m grateful that Wargaming did boost the Japanese tanks a bit compared to their historical counterparts.)

But when I look at the personal stats, I’m grinding a lot more credits with Soviet vehicles. Last week, I was invited by a young New Zealander to play together, and I can’t help but feel amazed by the internet. I love Soviet vehicles like the T-72, T-65, BTR-60, BMP and the BRDM. It’s been around 10 years back, but I went to Mongolia twice and was able to ride on the Mongolian Army’s T-54, BTR-60, BRDM-2 and BMP-1 as well as use the various guns like the 73mm smoothbore gun and the 76.2mm anti-tank gun.

I visited during the winter, when the temperature went below -20 degrees Celsius, but it was great to be able to see the real steel Soviet armor lined up in front of me. I won’t forget this experience. While I was happily fondling these Soviet tanks, a Mongolian tank instructor smiled wryly. (We drove to a frozen riverbed after this, and I fell from the vehicle when we took a break, and fell flat on my back. The Mongolian tank crew looked very scared, but I was fine, probably because of the layers of clothes.) I was interested in the 7.62mm anti-tank gun from long ago, and I went all the way to Mongolia so I could draw a German tank in the sight of the Soviet anti-tank gun.

The design was that of a typical artillery gun sight, and I remember going to the JGSDF Fuji School to ask an artillery researcher there about the details. The results of this research and my curiosity is the book “Weapons and Explosive (武器と爆薬).”

Tomorrow morning I’m going to Kure, Hiroshima to cover the submarine at the JMSDF Kure Museum. Then after that, I’m going to an offline event of my clan PZSR. While I’m writing this, I’m sure my cellphone is receiving messages from the Wargaming Japan asking when I’m going to upload my work. I’m sorry, I’m really sorry, please forgive me, I’m just a man, 63 years of age, and I work really slow. There’s a lot to do, but I’ll get this done first, then there’s a publisher work on the “Landkreuzer P. 1000 Ratte,” and then a few card illustrations for a mobile phone app, 2 pages for a thing I’ve took on personally, illustrations for lanterns at Yasukuni Shrine, oh, and a poster for the JSDF recruitment.

Then I’ll be drawing for a new series on the 20. And so thankfully, I’m still busy, even at this age. Anyway, I need to pack for the trip to the Kansai region from tomnorrow…!