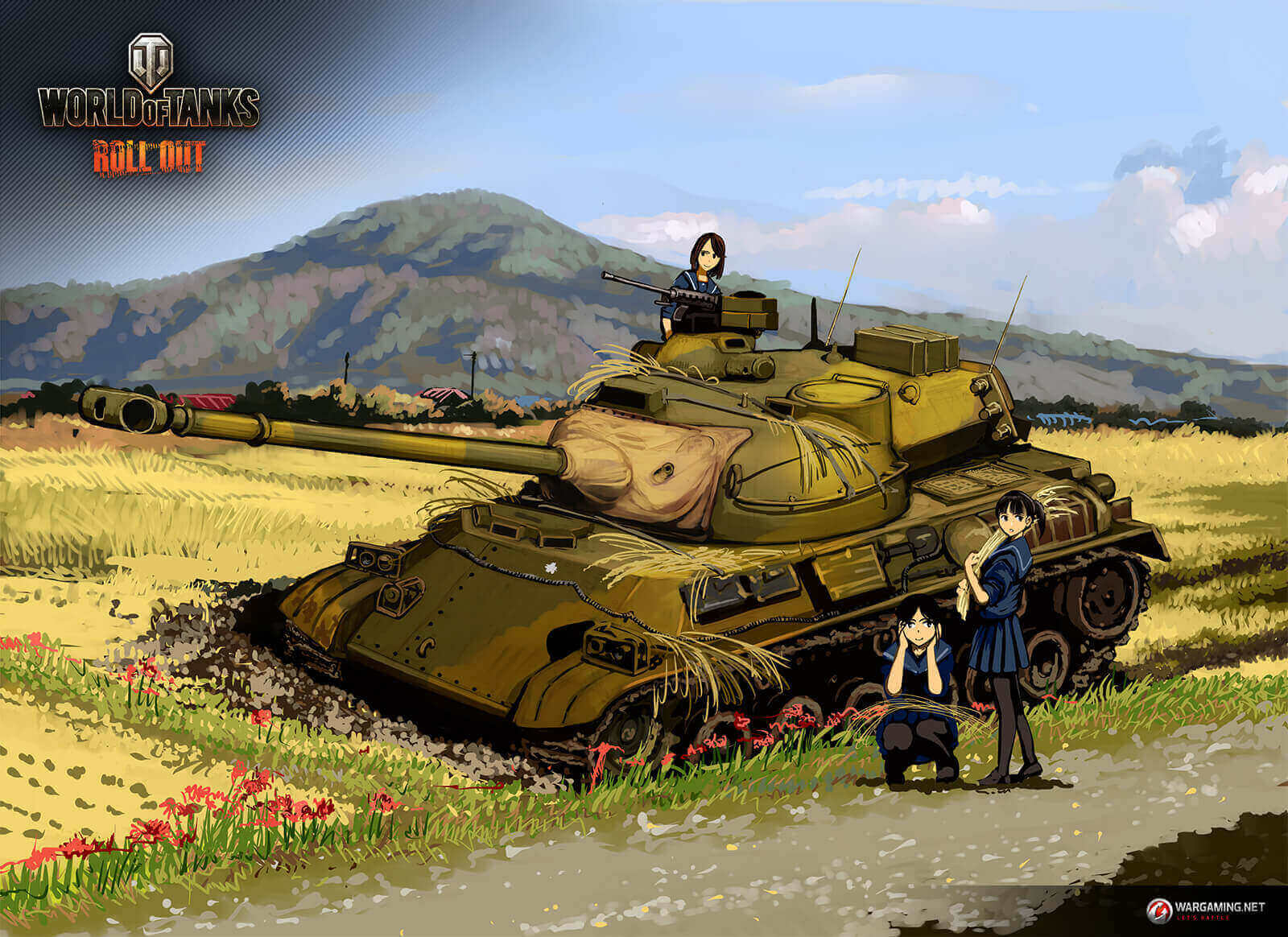 Today we bring you the Type 61, a tank widely recognized in Japan for often fighting Godzillas and other monstrous invaders in movies. Illustrator Takeshi Nogami draws the Type 61 in a rural Japanese setting.

The development of this vehicle began with the STA-2, followed by the experimental vehicles STA-3 and STA-4 to further test and refine the design. The vehicle that was finally adopted for production became the first postwar domestic tank in Japan, the Type 61. The name comes from the last two digits of the year the vehicle was officially adopted for production; Japan Defense Force equipment generally follow the same nomenclature.

The Type 61 falls in the first generation of tanks after the War, but by the time the Type 61 was developed, most of the world, like the American M60 Patton and the Soviet T-62, had moved on to designs that featured 105mm or larger guns. The British Chieftain even had a 120mm gun, so the 90mm gun on the Type 61 looked a bit lacking in comparison. This was because developing a domestic tank gun with a caliber over 90mm would have taken quite a bit of time and the effectiveness of such guns had yet to be determined. It was also thought to be difficult for a person with the average Japanese build to handle a 105mm or larger shell.

The Type 61 looks weaker, especially in terms of armament, compared to second generation tanks if you look solely at the specifications. However, engagements over 1,000m were rare in Japan, so there was no need to place an emphasis on gun caliber, which affected the long-range firepower of the gun.

The Type 61 was not made as an offensive weapon. Specifically created to defend the Japanese homeland, the tank was not made for head-on engagements. It was made to use the familiar landscape to its advantage by setting up ambushes to attack the sides and the rears of the enemy. When looking at any tank, one can learn to spot evidence of distinct features by learning about the period the tank was built in and the background of its creation.

The Type 61 began to be phased out with the adoption of the Type 90 tank. By the year 2000, all Type 61s were retired. Currently, only vehicles on display can be seen. The Type 61 was a commemorative tank that lived through the Cold War with the Japan Self Defense Force, and it also fought in the front lines during the battles against “kaiju” monsters in the classic “Godzilla” films. In addition, the tank has an unmistakable T-shaped muzzle brake, and the Type 61 is one of the most widely recognized tank in Japan. It is probably also the most battle-tested tank - at least in terms of fighting monsters.

In World of Tanks, the Type 61 can not only equip the default 90mm gun, but it can also equip the 105mm rifled gun, which was a combination not realized in real life. Give the Type 61 a try with its full potential unleashed!

The Type 61 is a fortunate tank that was adopted for use, yet never had to point its gun at an enemy.

The Type 61’s true adventure lied behind the screen. It fought many “kaiju” monsters that invaded Tokyo. It was sent back to the age of ancient samurai to fight against medieval cavalries. It also lead children in a rebellion against oppressive adults. The tank played an outstanding support role in a generation of films in Japan and it was probably the most successful “actor” in tank history.

I drew the tank in the environment it was meant to fight, in the rice paddies of Japan. The school girls were by the request of Wargaming Japan. Don’t blame me!