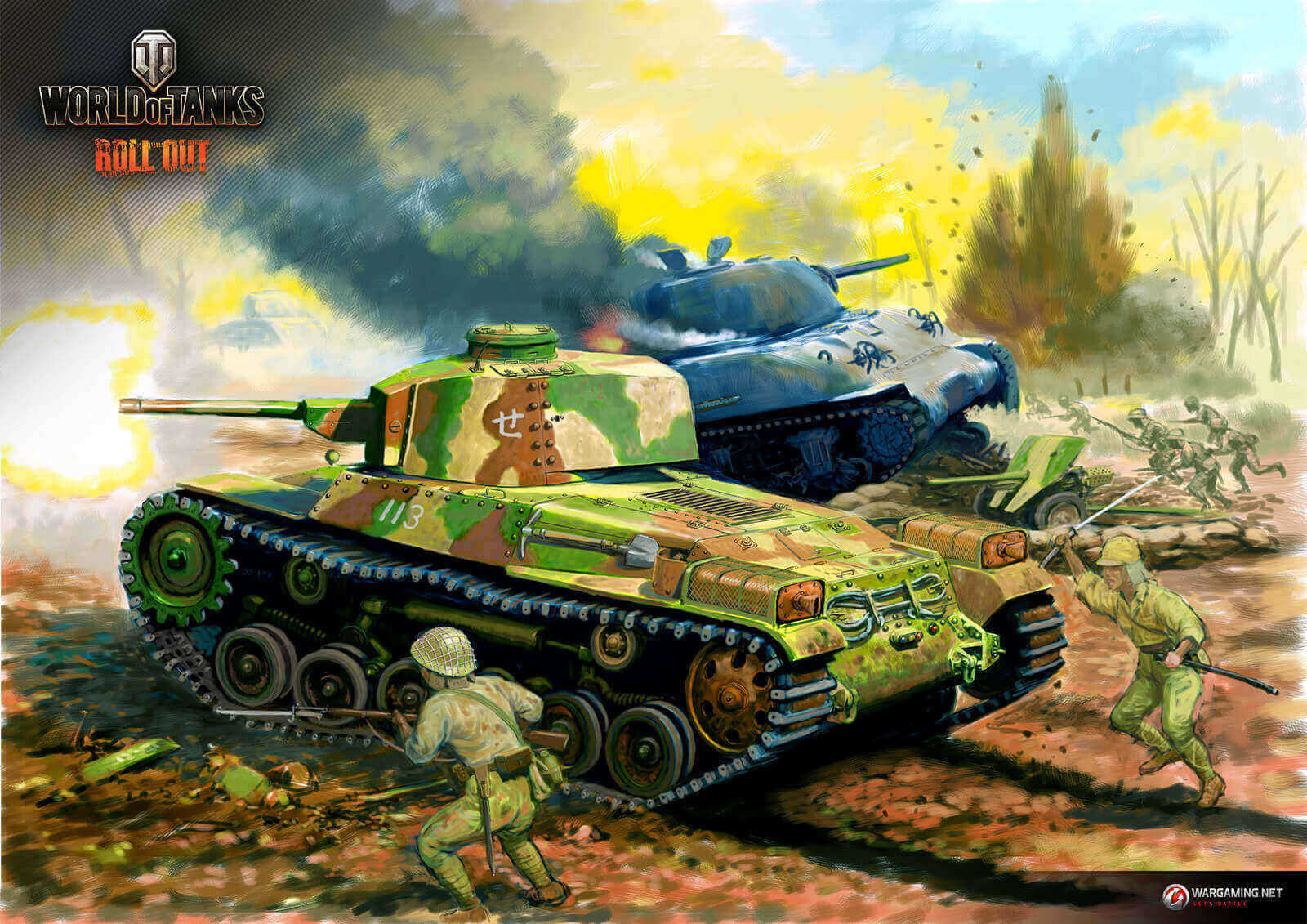 During the Battle of Khalkhin Gol in the summer of 1939, the Japanese tanks were no match for the Soviet BT series cavalry tanks. Type 97 medium tank, which was quite new at the time, was no exception. The upgrade Type 97 57mm tank gun, which were ineffective in the anti-tank role was an urgent issue. The result of the upgrade was an upgraded Type 97 medium tank with a new turret, the Type 97 medium tank Chi-Ha Kai. Also known as the “Shinhoto,” which literally means “new turret.”

The Chi-Ha Kai was put together to improve the armament of the Chi-Ha, and so initially the hull remained the same as the original Chi-Ha. In the later versions, however, the engine grille on the rear of the vehicle was covered with armor and the air intake was move under the track cover. This improved the protection as well as the engine efficiency. This layout was also adopted for use in the Type 1 medium tank and the Type 3 medium tank.

Furthermore, the Type 1 47mm tank gun used on the Chi-Ha Kai had a breech that closed vertically instead of horizontally in consideration of the working space within the turret. Initially a 49 caliber 57mm gun with over 800m/s muzzle velocity was considered, but to standardize ammunition with the Type 1 47mm anti-tank gun, the 47mm gun was used.

The sight used on the Type 1 tank gun was the Type 1 scope had a magnification of x4 and 14 degrees range of vision. The scope had range markings for up to 2,000m using AP shells. The expectation for the new main gun can be seen by the fact that it was used on the Type 1 tank developed after the Chi-Ha Kai as well as the on the Imperial Japanese Navy’s Type 3 Ka-Chi amphibious medium tank. The Japanese Army, however, never really caught up with the global tank development race, mainly stimulated by the German Army, and the campaign against the U.S. Army was always a hard fight.

There are records of Chi-Ha Kai’s facing M4 Shermans in the Philippines, so I drew this scene as one of such battles. The latter battles in the Philippines were miserable (the Japanese Army in general was quite miserable), and so it pains me to draw such a scene, but a job’s a job. I wonder if there were any instances

I thought of drawing the Battle of Shumshu, too, but the Soviet Army did not come with tanks, so I did disregarded the idea. I do wish to write the story in a manga comic sometime, though. I was to write about feelings towards tanks in the comments, but to think of it, I do not have too much special feelings towards tanks, especially Japanese.

Having seen the German and Soviet armor first, the former Japanese military’s tanks are just poorly made. The postwar Type 74 is modern and very potent looking, so I like it, but that’s about it. The Japanese tanks in WoT seems to have been given a little boost in penetration to make them at least usable, and they are half decent from around Tier 6. I only have up to Tier 5 in my garage, but I definitely want a STB-1 in the future, as well as the German E-100.

Speaking of the Chi-Ha, I learned something new while speaking to Mr. Yazawa the author of Sonaeyo!! (Be Prepared!!). I said that Japanese ships were structurally weak because they were riveted, but Mr. Yazawa corrected me saying riveting was actually more rigid than welding.

Ships that are welded are connected by a welding line, so any cracks will keep growing larger. Rivets on the other hand will stop cracks at the points where the rivets are. The structure is more stable, but rivets will make the ship heavier overall. That was a nice informative pro tip from an Isuzu Motors employee.

Since the engines of most emergency vehicles in Japan today are made by Isuzu Motors, Mr. Yazawa tracked down all the parts needed for repairs and maintenance, sped up the production of lacking parts and went to maintenance factories in the disaster-affected area to check the repair work himself and support the relief effort. He was awarded a certificate of gratitude from the Ministry of Defense for utmost contribution to the relief effort by a civilian.

The collector’s edition Die Erzählung des Schwarzen Ritters (The Story of the Black Knights) I have is translated by the “Superman” Mr. Yazawa. I plan to release e-books, Kindle edition of the books. [Mr. Yazawa’s book “Sonaeyo! Logistic Support Towa Nanika” (Be Prepared!! What is Logistic Support) is also a good read.]

In order to draw the Chi-Ha, I went to check the Chi-Ha in the Yūshūkan Museum again. My office is near the museum, so I immediately contacted Mr. Kuzuhara and went there.

I wasn’t sure about the idler wheel adjuster on the rear of the tank and the tow hook so took some photos on the cell phone and made a few sketches. There are some things that are hard to tell just by seeing photos of the vehicles, so I use these as additional reference. These additional sources were great help in writing the rear of the Chi-Ha Kai. I first learned about the Chi-Ha Kai 40 years ago when I saw the large illustration page by Yoshiyuki Takani folded into the book Nihon no Sensha (Japanese Tanks) released by Kojinsha in 1971.

Tanks are weapons of war, embodiment of death and destruction, but the machines themselves are very powerful lively machines. Illustrations are different from photos in that you have more freedom to use a variety of modes of expressions. Back in the days, I felt draftsmanship and rich expressions are the key skills to drawing and practiced to improve my skills.

Square things square, rounds things round. The basics of illustration are easy. The rest is up to how motivated you are.

Before I became an artist, I was a businessman. I drew when I had the time. One by one, I mastered the components that made up an illustration. Business and art is the same, in that clearing the obstacles to your goal is the key to success. This is discussed in Sonaeyo!! Logistic Support Towa Nanika by Mr. Yazawa.

Machines and people alike, it’s the illustrator’s job to make them into a fine-looking picture. In order to hone my portrait skills, recently I’ve studied the art of famous Russian painter Ilya Yefimovich Repin. In terms of landscape, I like Turner, and I went to the Turner exhibition when it was in Japan.

Drawing makes you think logically. A lot of thinking goes behind drawing an illustration. By triggering that thought process, you can greatly improve your artistic talent.

Looks like we digressed a bit from the topic of tanks.

On a final note, I heard that in the battlefronts in the Chinese mainland, the gun was dismounted and put inside the turret when the crew was sleeping. Was this for maintenance? It seems a bit hectic to remove the gun every evening.