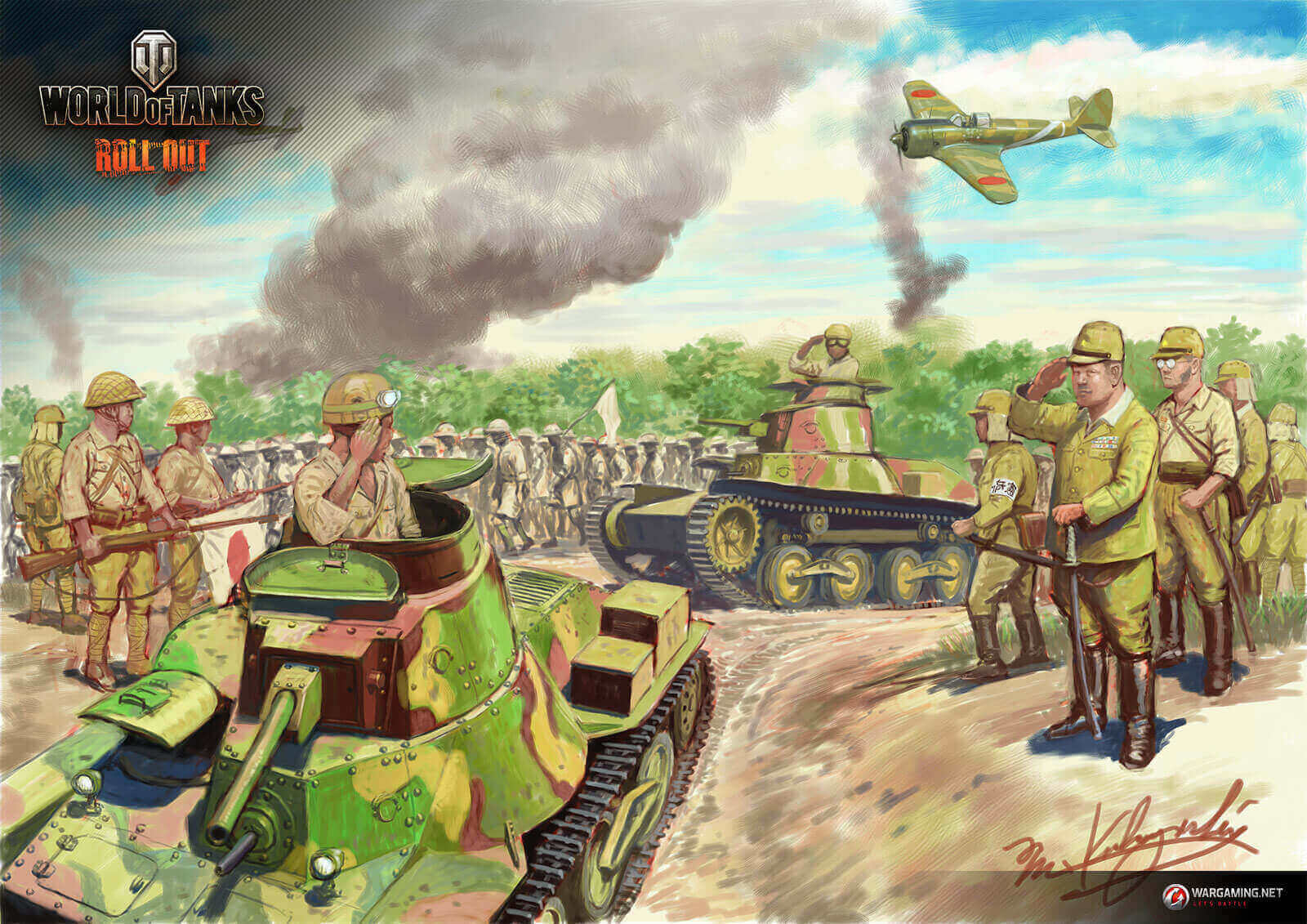 In part 4 of the "Japanese Tanks Illustrations" - an illustration column to shed light into the mysteries of the Japanese tanks, Motofumi “Genbun” Kobayashi returns to bring you the Type 95 light tank Ha-Go. This tank, along with the Type 97 medium tank Chi-Ha, served as the back bone of the Japanese Army and fought in numerous battles.

The Type 89 medium tank, which pleased the Imperial Japanese Army when it was originally rolled out, started to show signs of aging, especially in its maximum speed of 25km/h, as the entire Army became mechanized. And so the development of a tank lighter than the Type 89 medium tank started on 1933, and a prototype was completed by the end of the next year. It is also known as the “Ha”-Go.” (The ancient Japanese phonetic alphabet goes: “I, Ro, Ha…etc.” “Go” rougly means “Type” or “Model.”)

When you look at the development history, it is basically a “mini-Type-89.” It uses the same inline 6-cylinder diesel engine as the Type 89B I-Go Otsu, but the new tank was over 5 tons lighter at around 7.5 tons, and was able to reach 40km/h. Maneuverability was also improved and the engine room on the rear-right of the vehicle was accessible from inside the vehicle.

The largest difference, however, was the change in the main gun. In the initial stages of the development, the Type 95 light tank was equipped with the Type 94 37 mm anti-tank gun. This was a tank gun created just around the same time as the Type 95, and the tanks equipped with these were sent to the 2nd Tank Regiment in Manchuria. A performance test on parameters such as temperature resistance was conducted there. The gun had an elevation of 20 degrees, and a depression of 15 degrees, and even with the turret locked, it could be moved up to 10 degrees left and right. Type 94 AP and HE shells could be used, but anti-tank capabilities were not emphasized, and the initial velocity was quite low at 600m/s and only 4.5mm of armor could be penetrated at 300m. Note that this anti-tank gun was different from the similarly named Type 94 37mm gun and there was no compatibility of the ammunition.

In the campaigns in China, the lack of anti-tank capabilities became apparent, and as a solution the Type 98 37mm tank gun was created. This was a modification to add more power to the gun, and the initial velocity was increased to 700m/s. Most of the Ha-Go’s that participated in the battles in the Pacific had this gun equipped.

The Type 95 light tank main tanks used by the Japanese Army, yet they were no match for the Soviet BT series cavalry tanks or the American M3 Stuart light tanks. But no successful replacement to this light tank, and it ended up fighting in the frontlines until the end of the War. 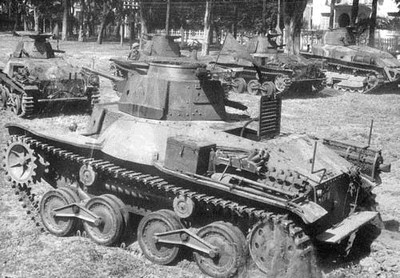 Rats! I can’t play World of Tanks, since there’s so much work…

I had in my mind a Type 95 light tank after the battle of Bukit Timah, a key location in the Japanese invasion of Singapore, when I drew this illustration. In the background are surrendered soldiers and above is a Nakajima Ki-43 of the Imperial Japanese Army Air Service. On the left foreground is a Type 95 light tank going downhill and on the right side is General Yamashita, a.k.a. The Tiger of Malaya, giving a salute. The nickname of Tiger of Malaya was given by a Japanese reporter at the time, however, General Yamashita did not like being called a Tiger.

There are famous images of General Yamashita slamming the table during the terms of surrender negotiations with the English senior officers on February 15, 1942. He is said to have hit the table asking, “Is it yes or is it no!?” The truth is actually less dramatic and he was apparently frustrated by the bumbling interpreter.

The man next to General Yamashita is Masanobu Tsuji, who was called the “God of Operations.” Recorded images of the time show him with a mutton chop beard. Masanobu Tsuji had a Fu-Manchu-like beard during the Battle of Khalkhin Gol, and many of his actions involved trying to stand out. And Kokoda Track campaign and the Guadalcanal were the results of that. Looking back at the campaigns in his postwar Defense Agency years, he believes the operation was appropriate, but the scanty supply line was the liability.

Masanobu Tsuji is a son of a charcoal making family. Despite seemingly low status of the job, there was ample demand for charcoal and firewood, since they were the main fuel used back then. This made Tsuji’s family relatively wealthy, which is why he was able to have an education, graduate first on the list of a military academy and become an elite army officer. He is somewhat of a local hero in his hometown, and there was a 100th anniversary celebration on year 2000, and a bronze statue of him there.

This Battle in Singapore was the height of the Japanese momentum in the War in East Asia. Just 4 months later was the famous naval battle in Midway on June 5, followed by the losses in Guadalcanal on August, and everything went downhill for the Japanese from there. Japan started the War since it needed strategic resources, but ironically this lack of resources haunted the Japanese throughout the War. Although some rare metal deposits have recently been found in waters near Japan, historically, Japan never had proper energy producing resources such as oil. All it had were its diligent and perseverant people. And we lost pretty much everything other than the people in the War. But by putting all the energy that previously went to fighting into rebuilding a better nation, Japan was able to rise from the ashes to where it is today.