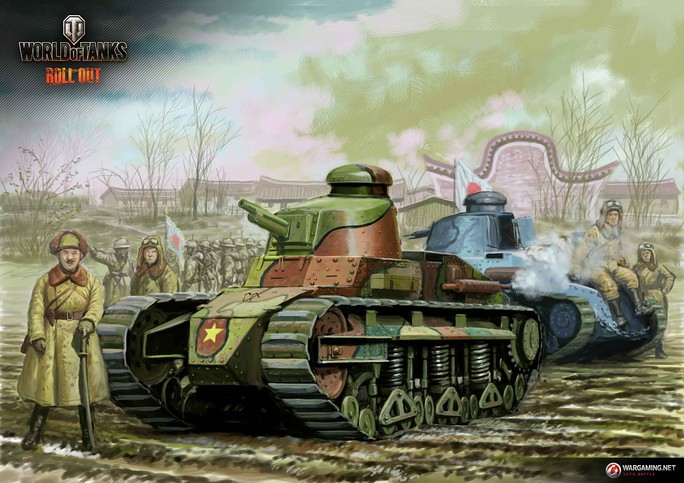 With the advent of update 8.10, the Japanese tank tech tree was added to World of Tanks. In order to bring the relatively little known Japanese tanks to the center stage, we had famous Japanese illustrators introduce these tanks in this column. Part 1 is on the starting vehicle in the Japanese tech tree, the Tier 1 “Renault NC-27 Otsu,” brought to you by veteran military manga artist, Motohumi “Genbun” Kobayashi !

The first domestically-built tank in Japan is the Type 89 medium tank, but before their numbers were sufficient, the French Renault light tanks were the main tanks of the Imperial Japanese Army (IJA). There were two types of Renault tanks imported to Japan, however: the Renault FT imported in 1919, and the Renault NC27 imported in 1927.

NC, which is short for “new tank” in French, is the final form of the French Renault tanks seen in lower tiers. The engine power was increased from 45 HP to 60 HP and the suspension was updated to reflect technological advancements. These upgrades improved the speed of the tank from 8km/hr to 20km/h.

When you look just at the specifications, this tank looks great, but the Renault Type-Otsu had frequent engine overheats, and the improved suspension system with the distinctive triple upright coil-springs and hydraulic shock absorbers was not as effective as it was thought to be. The Renault technicians blamed the “hot and humid climate of Japan” and did not aid in the field correction, and so with considerable effort, the IJA Technical Department patched up the tank. 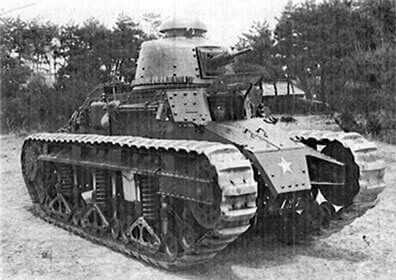 This is the Renault tank used in the 1931 Mukden Incident.

I love powerful tanks as a subject of realism, but I never thought I’d be drawing the French-made IJA Renault tank.
This was the first time I’ve drawn a Renault tank, and I got a lot of help from the book provided by “Kunimoto Private School of Tank Technology” as a reference. While drawing this tank, I learned a lot of new things myself. You need to know well about the suspension and undercarriage to draw a vehicle properly.

I’ve always been interested in the design and mechanics of tanks, and with the help of Mr. Nakanishi, I debuted illustrating black and white comics, tank and tanker illustration as well as cutaway drawings of German tanks while coauthoring in Souretsu!! Doitsu-Kikougundan (The Brave German Panzer Corps!!).

That was the first time I’ve drawn a cross-section of a tank, but the internals of a tank never fails to interest me. As paradoxical as it may seem, the shape of a tank, I believe, is decided by its internal function. The Israeli Merkava is a chief example.

Around 8 or 9 years ago, I had a chance to operate vehicles such as the T-54, BMP-1, BTR60, BRDM-2 and fire the famous “Ratsch Bumm” ZiS-3 gun in Mongolia. (The real objective was to check out what the Soviet anti-tank gun reticle looked like.)