It's been over a fortnight since the WGL APAC-Asia finals are held. The entire event was an exciting ride from start to finish, so much so that we had to spend a little time choosing the best moments and photos to highlight for our recap. Now that it's done however, we're ready to show you what happened in Seoul during 24th and 25th October 2014 - behind the scenes and the match recaps as well!

As the finals were spread out over the course of two days, we have seperated them into their own individual sections. To choose a particular day, simply click on the corresponding title below:

The first day of the finals was held at I'Park Mall in Seoul. A gigantic shopping mall located next to one of Seoul's major train stations, it also houses the legendary Yongsan eSports Stadium on the 9th floor. This particular arena has played host to numerous eSports tournaments since it was open to the public, including but not limited to World of Tanks! 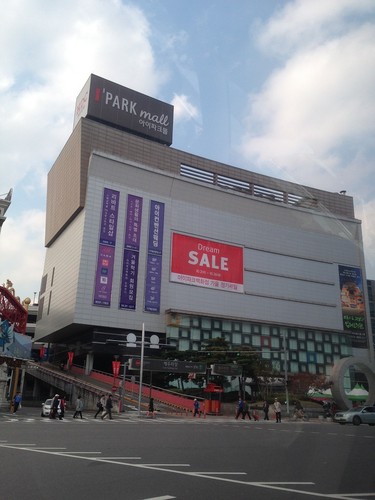 The three teams in the finals - ELong, Charlotte Tiger and ARETE - arrived at the eSports Stadium about three in the afternoon and promptly began setting up the terminals. As a professional World of Tanks player, every advantage counts... and that means optimising your seat position as best as you can. As any tank commander knows, the slightest change in mouse sensitivity, monitor brightness or even keyboard positioning can mean the difference between victory or defeat. 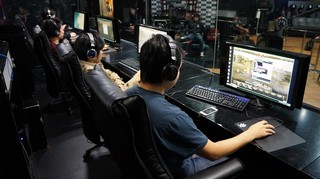 One might think that setting up an event like this only requires a little over an hour to complete, but that's nowhere near the truth. The lighting, seating, sound systems, stage and the all important player booths must be checked and rechecked to make sure that everything works. The final touches made on the last day alone actually began on the morning of Day 1, well before the teams ever stepped into the Stadium.

But there's only so much preparation one can make before the real thing happens. About an hour or two before the finals began, the doors were finally open for the spectators. They began filing in, slowly filling up the place. The stream of visitors would not stop until the matches were well under way. 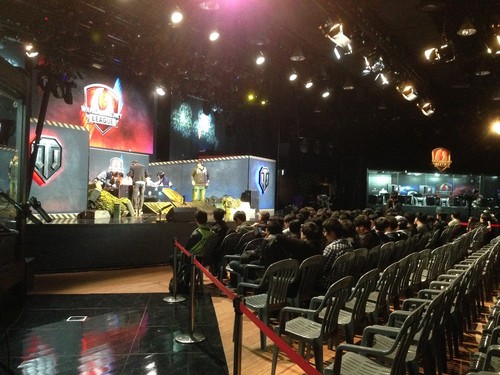 At almost 7:00 PM, the lights dimmed and the commentators walked on stage to the sound of applause and cheers: the event has finally begun! 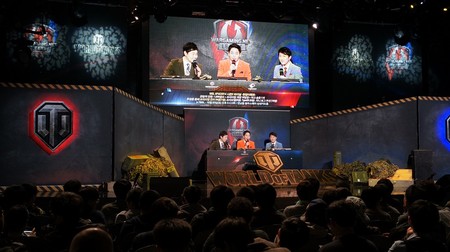 The presenters of the semi-final opened the event with some light banter about the teams and the event of the day, entertaining the crowd as the teams made the final adjustments to their equipment. The enthusiasm of the commentators, combined with the eagerness of the crowd to see some great games practically energised the whole venue and got everyone hyped up for the matches. By this time, the venue was so packed with people that the chairs had run out for late arrivals, but amazingly enough, nobody minded standing up to watch. 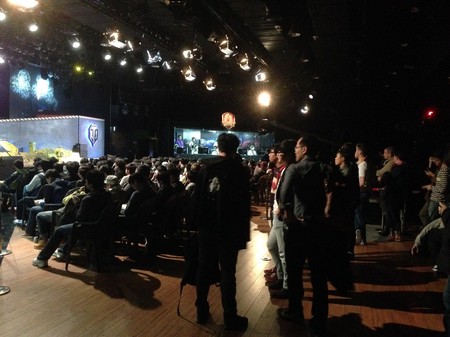 Finally, the main screen flashed the names of the teams in the first match amidst renewed cheers. The finals are starting now: may the best team win!

As great as Yongsan eSports Stadium is, we sadly have to leave it behind for a larger venue: Bluesquare. 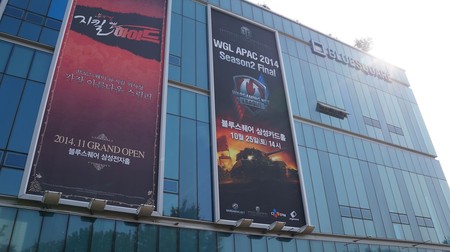 This modern building plays host to theatre troupes and entertains its guests with musicals and plays every week of the year. On 25th October however, a part of it has been reserved to present the Grand Final of the biggest World of Tanks tournament in Asia.

Similar to yesterday's turn of events, the teams arrived at the venue several hours before the matches were slated to begin, having to test out their equipment and customise their setups. Unlike the Semi-final held the day before however, a line was already forming up in front of the main entrance; the spectators were already waiting to go in!

Luckily for the growing crowd of people patiently waiting outside the door, there was plenty of entertainment to go around. The Tank girls were already out in force, hosting mini contests where participants could win free premiums. If all else fails, one could always be contented with a couple rounds of Blitz on their mobile devices.

Eventually, the doors were flung wide open, accepting the spectators who were now swarming the once quiet corridors of the building.

Upon entering the hall where the grand final would be held shortly, one could tell that this was a much larger affair than it was yesterday: rows upon rows of seats lined up before a massive stage, enough to accommodate a few hundred Tank fans easily. Decorations adorned the stage that supported two player booths carefully marked out in red and blue lighting. An immense screen sat behind them, bearing the logo of the tournament. 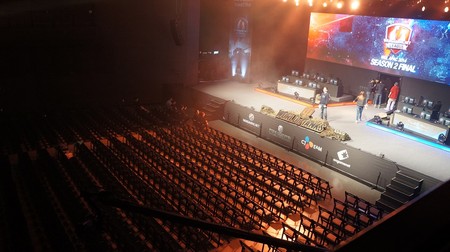 The fans slowly filled the seats over the next hour or so. Once again, there were so many people that the first floor of the hall couldn't accommodate them all. Luckily, there was a balcony section on the second level available, which was swiftly converted to house the rest. This time, no one would be left standing.

At exactly two in the afternoon, the lights began to dim. The spotlights that illuminated the (otherwise dimly-lit) hall blazed with neon colours as the emcee of the event walked out to the stage, cheered wildly by the crowd. The whole thing almost resembled a rock concert of sorts. 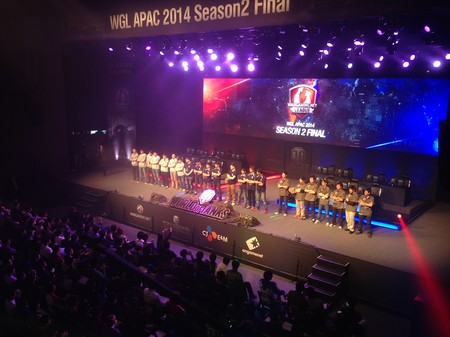 It wasn't long before the emcee introduced the three teams that would be battling for the title of champion: ELong, Charlotte Tiger and ARETE. The teams came out on stage together to introduce themselves before assuming their positions: ELong on the booth to the left and Charlotte Tiger to the right, while ARETE disappeared behind the curtains.

The huge display on the stage suddenly flickered to life, segmenting itself into three sections. The logos for ELong and Charlotte appeared on both sides of the screen (this would change accordingly depending on the teams using the booths) and a series of short films began to play, introducing each of the three teams that made it to the finals. 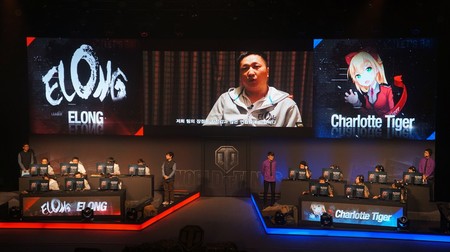 As soon as the last video finished, the voice of the commentators filled the air and the spotlights dimmed. The grand final has finally begun!

The cheers were deafening as the final shot ripped through the last remaining tank from ELong. Many of the spectators were unabashedly ARETE fans, but who can blame them? In Korea, eSports players are similar to star athletes or sportsmen in terms of status. 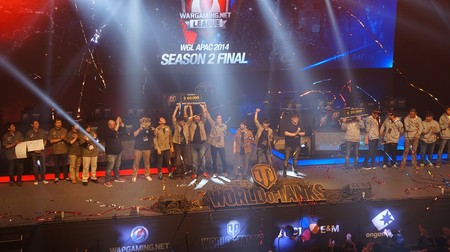 But that's not to say that ELong and Charlotte Tiger were met with silence when they came up on stage to greet the crowd again; on the contrary, the ovation that they received was as generous as the one given to ARETE.

The tournament finals are now officially over, but what's next? A celebration, of course! 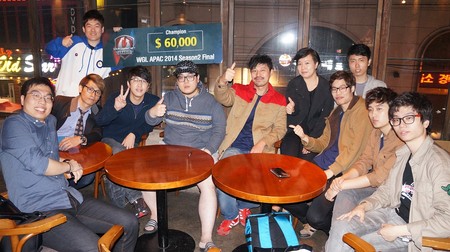 Later that evening, the three teams gathered again for dinner somewhere in Gangnam District. First, they ate their fill...

Then the team members began mingling with each other, trading facts about themselves and tips on the art of tank battles... 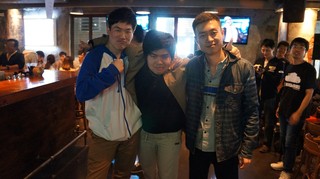 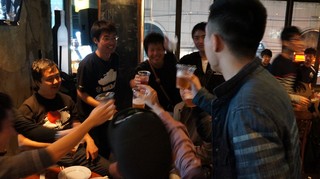 And then they progressed to several rounds of darts. Although they were no longer aiming at tanks, one could tell that the spirit of competition was still alive and well!

We would love to tell you what the score was at the end of the mini tournament held that night, but to be honest, nobody cared that much. There's a time and place for everything, and at that point, being buddies with one another was the most important matter in their minds. 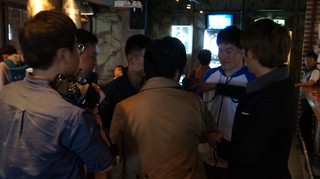 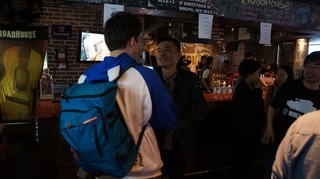 But all good things must come to an end. After an extended goodbye consisting of many well wishes and 'see-you-next-season' jokes, the players began leaving one by one. Whether or not the teams will have the good fortune to meet again, one thing is certain: the bonds that were made between ELong, Charlotte Tiger and ARETE (each based in seperate countries no less - China, Japan and Korea) will not be easily forgotten.

Read the whole thing again, or check out the official scores here.