UPDATE: We have extended the registration period to 25th September. There's still time to sign up for the tournament, so do it now!

Tank Commanders in the Philippines!

Time to show your love for your country! The Pinoy Tank Pride tournament is about to begin, and we're inviting all of you to take part.

We've got some serious cash prizes set aside for the champions of the tournament, so if you've had enough of pubstomps and want to show the rest of nation how good your team is by claiming the prize money, this is your chance! 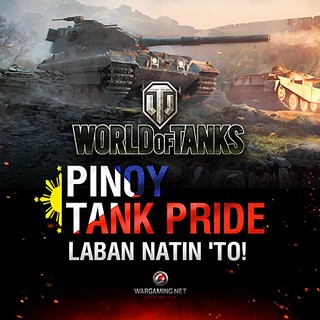 As this is a national online tournament, only Filipino accounts played in the Philippines will be allowed to register a team and participate.

Unlike previous offline events where teams must battle in the same venue, the Pinoy Tank Pride tournament is strictly online only: you can join tournament matches in any town or city - even in the comfort of your favourite cybercafe!

To register your team for the tournament, please visit the forum thread here. Please note that the registration period runs from 12th to 25th September [UPDATED], after which it will be closed.

Note: This tournament is available for players based in the Philippines ONLY.

Note: Prizes listed for Expert Category are shared between the entire team.

Note: Prizes listed for Novice Category are awarded to each player in the team.

This is your chance to be the pride of the nation. Good luck in the tournament!

Register for the Tournament here