Almost a month has gone by since this intense competition began, and it’s time for our teams to really get serious (if they haven’t already!). Think you can predict who will make it to the finish line? There’s only one way to find out if you’re right – stay tuned in!

For now, let’s meet and give our best wishes to the latest SEA Major League entrants, Anh em and GGWP! 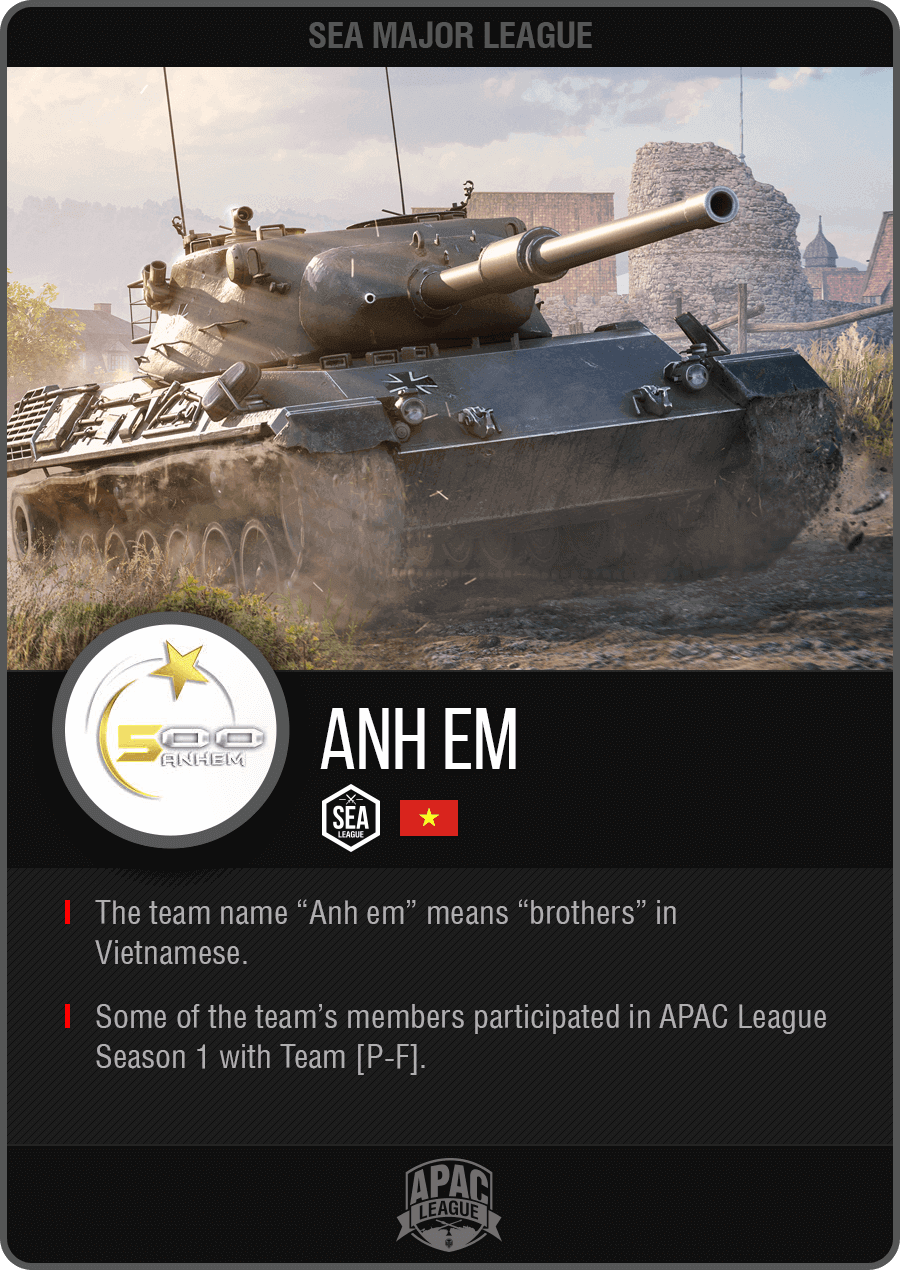 How was your team formed?
Minhnhat_danang (team captain): We are all Vietnamese, and we are friends. Duong is our team's founder; he started it all.

What was your motivation to begin joining tournaments?
We wanted to join a big tournament to show Asia that Vietnamese can do everything!

Are there any teams you're really interested in crossing swords with?
PIFO! I know some of them; their team looks so strong and we'd love to beat them.

Can you name some of your favourite Tier X tanks?
The BatChat 25t, because it's fast and dangerous.

Which maps do you like best for competitive play? Are there any you'd rather avoid?
We like Prokhorovka or Steppes, we get some good guys using medium tanks. But we dont like to play on Himmelsdorf – it's too small to use rush tactics. 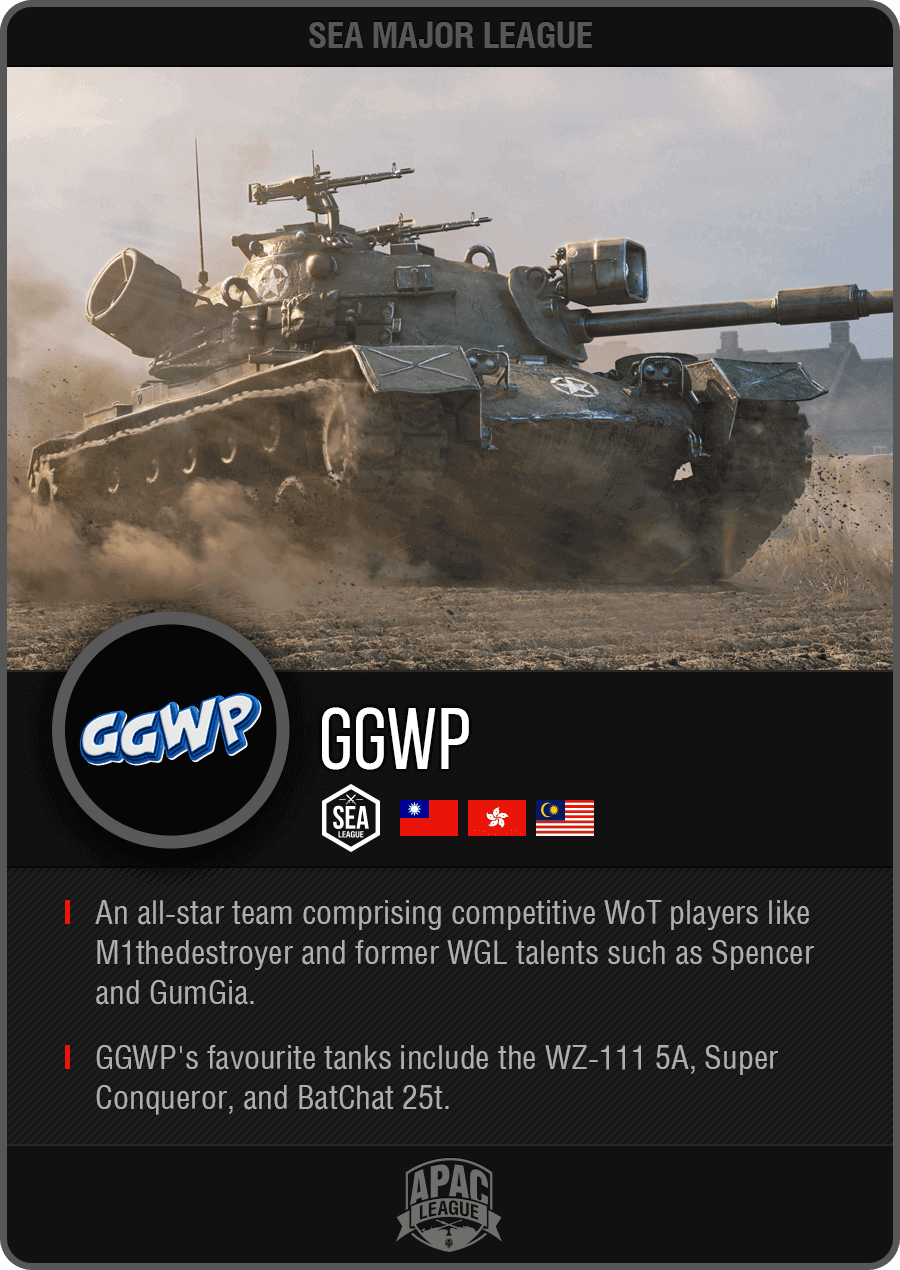 Could you introduce yourself and your team?
SpencerTW (team captain): GGWP is a team based in Taiwan, Hong Kong, and Malaysia. Though our members differ in nationality, everyone shares the same interests and goals, so this is a team that makes me feel right at home.

In 2013, I started the Steel Knight team, which played in big competitions such as the TanksAsia Masters, Quarter Year Championship, and Wargaming League Asia. From 2014 to 2018, I served as team Horsemen’s commander and strategist. But in 2018, the members of the Horsemen began to take different paths – for example, None and Archon joined Team Efficiency – and so the team officially had to disband. After that, I decided to form a new team with GumGia, DarkDH, NicoNicoNi and other former WGL players: GGWP.

How did you end up getting involved in the competitive WoT scene?
My objectives are the following: Team battles, proving myself, and achieving glory.

There comes a point when playing random battles can no longer satisfy you – you'll want to experience the thrill of good teamwork, and to have your talent recognized. Trust me, all skilled players will naturally want to explore this path and seek a new challenge for themselves.

I've since managed to achieve my ideal: To find great teammates to battle alongside and improve my skills with, and to stand together with them in the international competitive arena. Only by doing so can I show the world that I am one of Taiwan’s most outstanding World of Tanks players.

Are there any teams you're especially looking forward to competing with?
GGWP (as a team): We feel that every team in the APAC League is outstanding in their own right, so we are looking forward to battling them all. After all, we’re a pretty good challenge for them too, haha!

M1thedestroyer: PIFO – we were in the same clan, but we've never competed with each other before.

Idrinkshampoo: Big Daddy – some of my clan mates are in that team.

SpencerTW: Team Efficiency (now known as Reported) & Caren Tiger. Some of the Reported members and I used to be part of the DPS Clan. And besides having won APAC League Season 1, Caren Tiger is also a former WGL team. For me they are the two teams that I am currently most familiar with. The last real-life encounter we had with them was back in 2017, at the WGL Season 2 Finals in Taipei. Since then I've really missed them, so I hope we get a chance to finally meet them again at a live event!

Which Tier X tanks do you most like to bring into battle?
Our favorites are the WZ-111 5A and Super Conqueror, as they have strong armour, mobility, and solid DPM. We feel these tanks are very versatile on a variety of maps, and can be used to execute many strategies. Another would be the BC-25t – it has the mobility, stealth, detection capabilities, and firepower to get the job done.

I'd also add GumGia’s favourites to the list: The FV215b 183 and the FV4005 Stage II. He says they make the opponent nervous in battle, haha.

Do you have any maps that you feel you perform best or worst on?
This is also a pretty good question. For some of our team members, it’s their first time participating in the League, so we can't be sure. We’re certainly no strangers to Himmelsdorf & Mines. Cliff is a map we’re particularly cautious with, since we lost to NoFreeWiFi on it in last Season's Qualifiers and could not enter the Major League. Other than that, we’re hoping that Ghost Town can make a return to the map pool, as it has always provided the audience with many intense and entertaining moments (like tank-flipping)!