Taipei, 02 February 2013 – Taipei Game Show 2013 approaches the first day of the weekend. Saturday and winter vacation for students means that a lot more peple will show up than normal days. Thus, every exhibitor at the event are trying their best to lure as many visitors to their booth. Without a doubt, Wargaming will be onsite to present the best show to our lovely fans and all gamers in Taiwan. During this weekend, we will provide not only coaching by the Tank Girls and Q&A activities but also Clan Fights, Taiwan Reenactment Group and lots more exciting events. 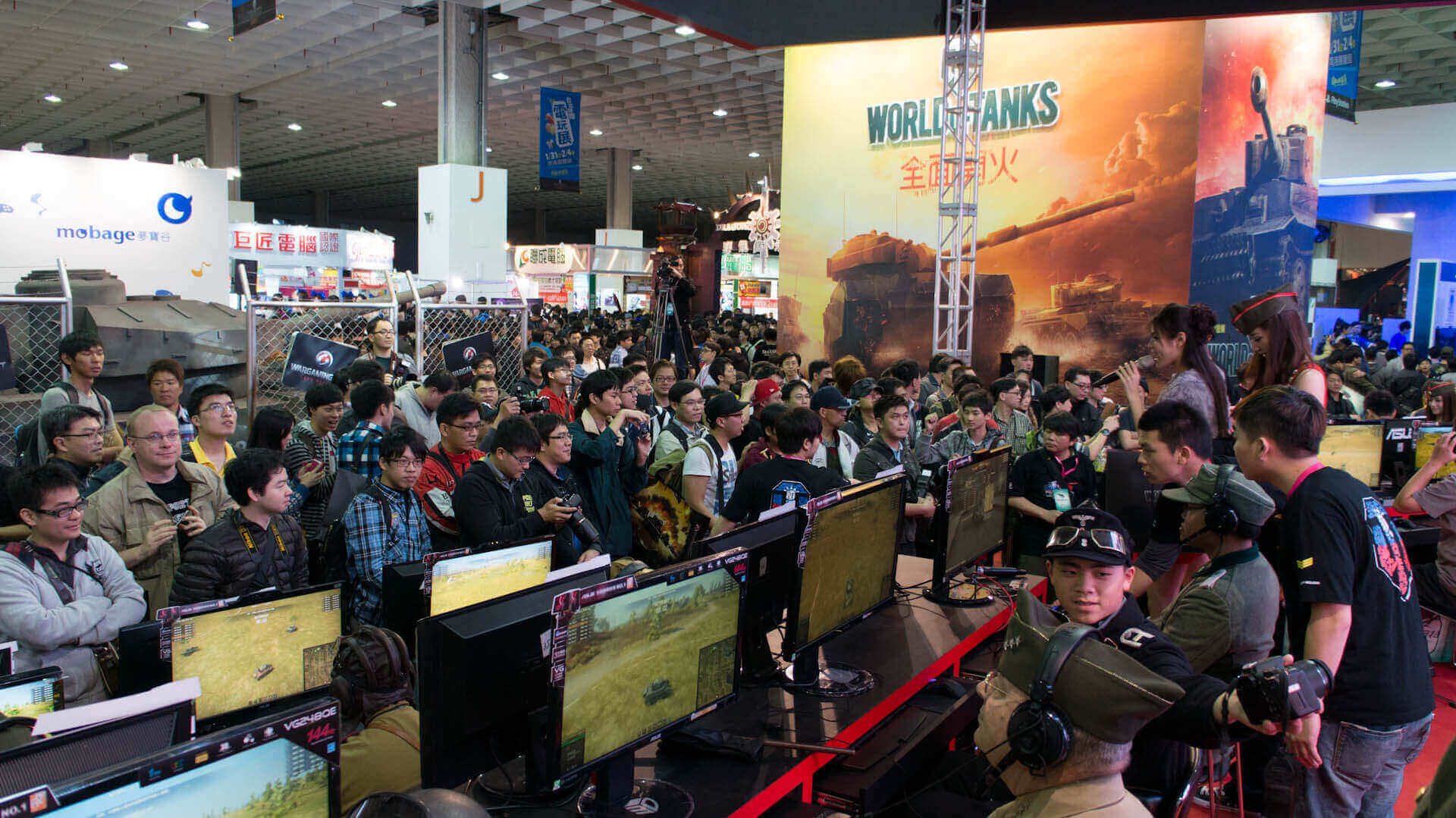 The Wargaming.net booth was crowded with enthusiastic visitors all day 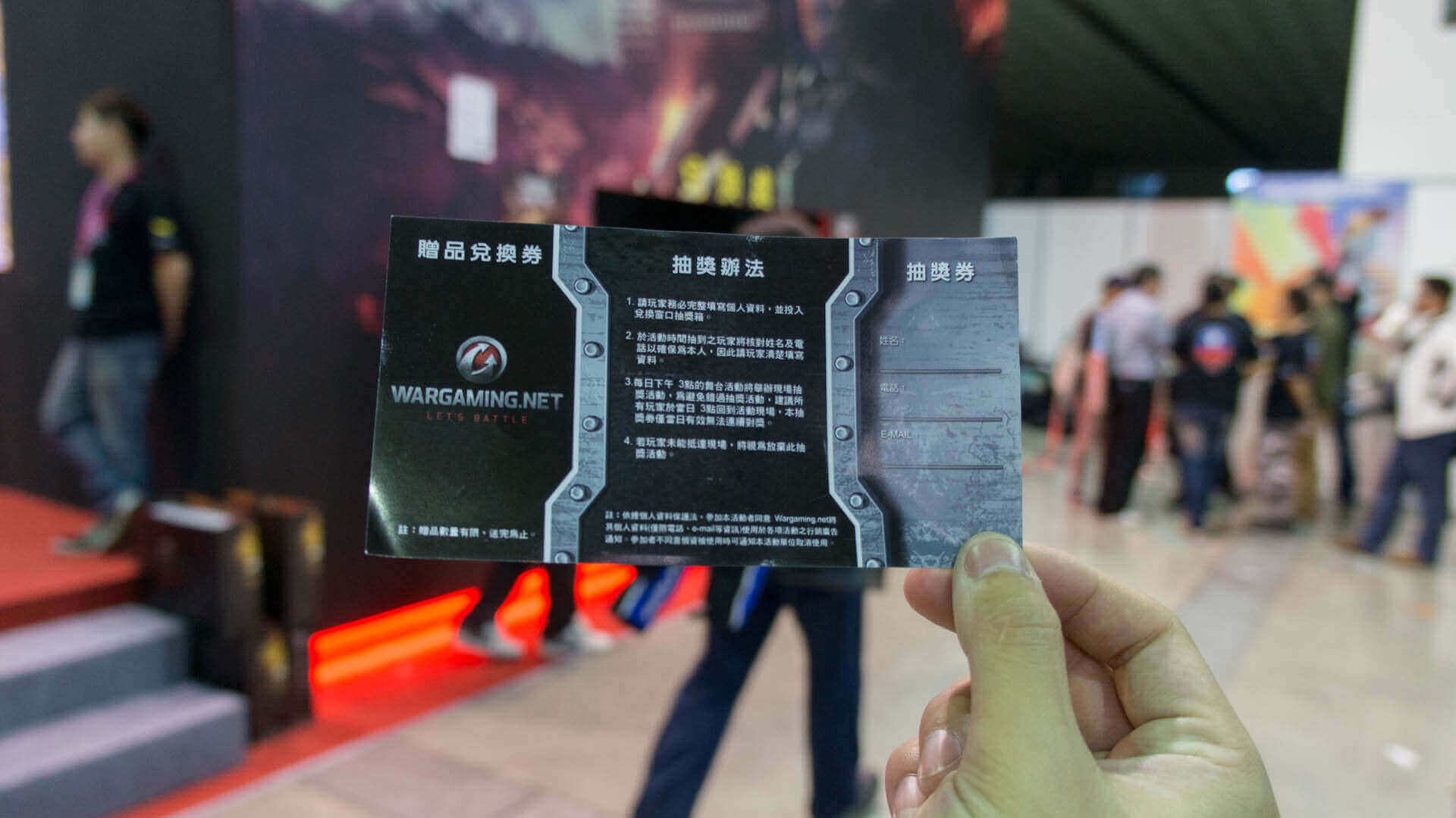 After trying their hand at World of Tanks at the demo station, gamers will get this ticket for premiums 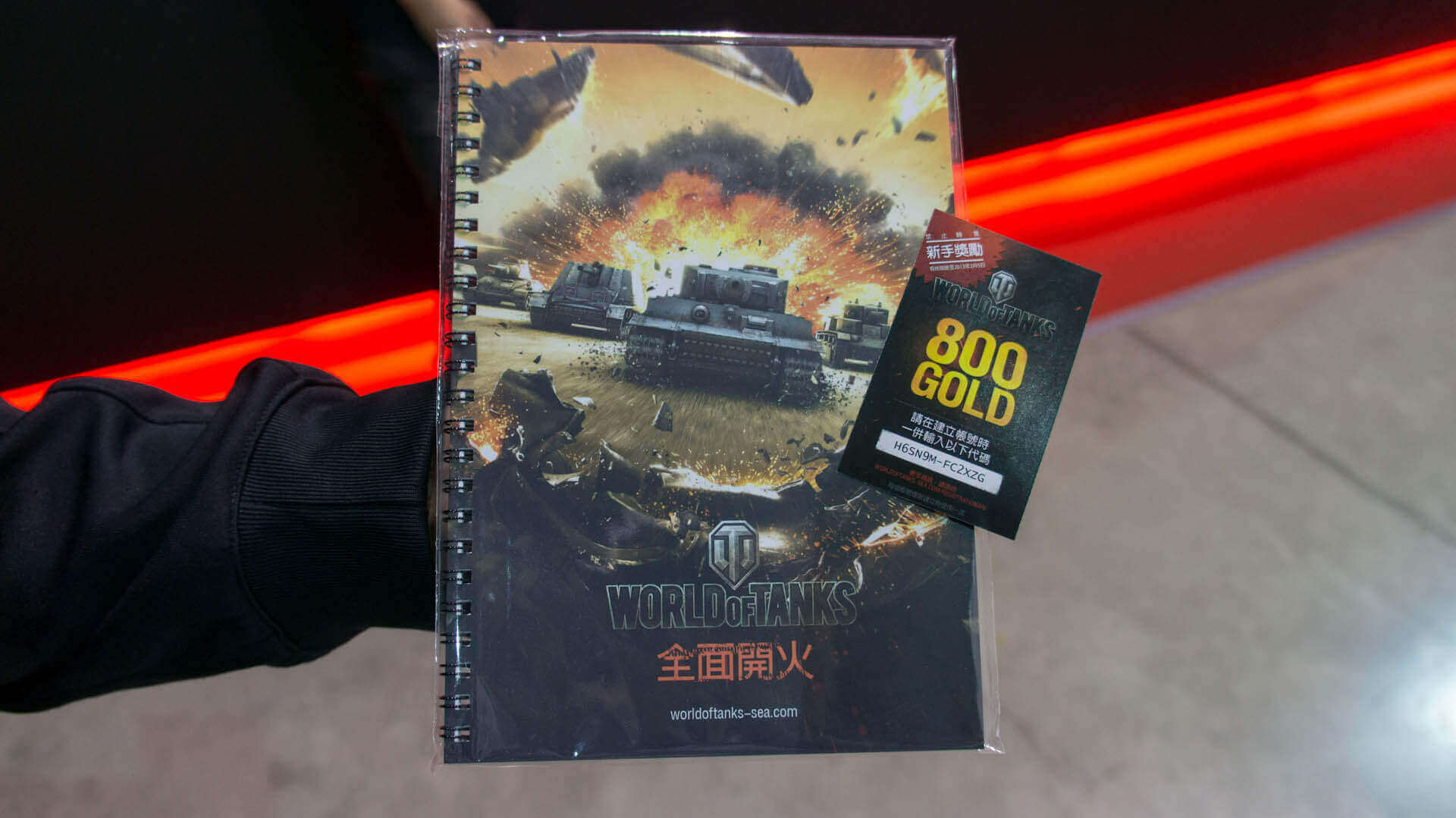 Today’s gift: invite-code and a notebook!

The exhibition began today at 11:00 and event attendees were surprised by the seven “World War II veterans” at our booth. Gamers was so excited to see them and the flashes from their cameras never seemed to end. These "veterans" are actually from the Taiwan Reenactment Group (TRG) which is an asscociation of fans who are brought together by their love for everything World War II. They like to dress up and act as famous generals, one of whom we shall see today as the great hero of WWII - General George Smith Patton. 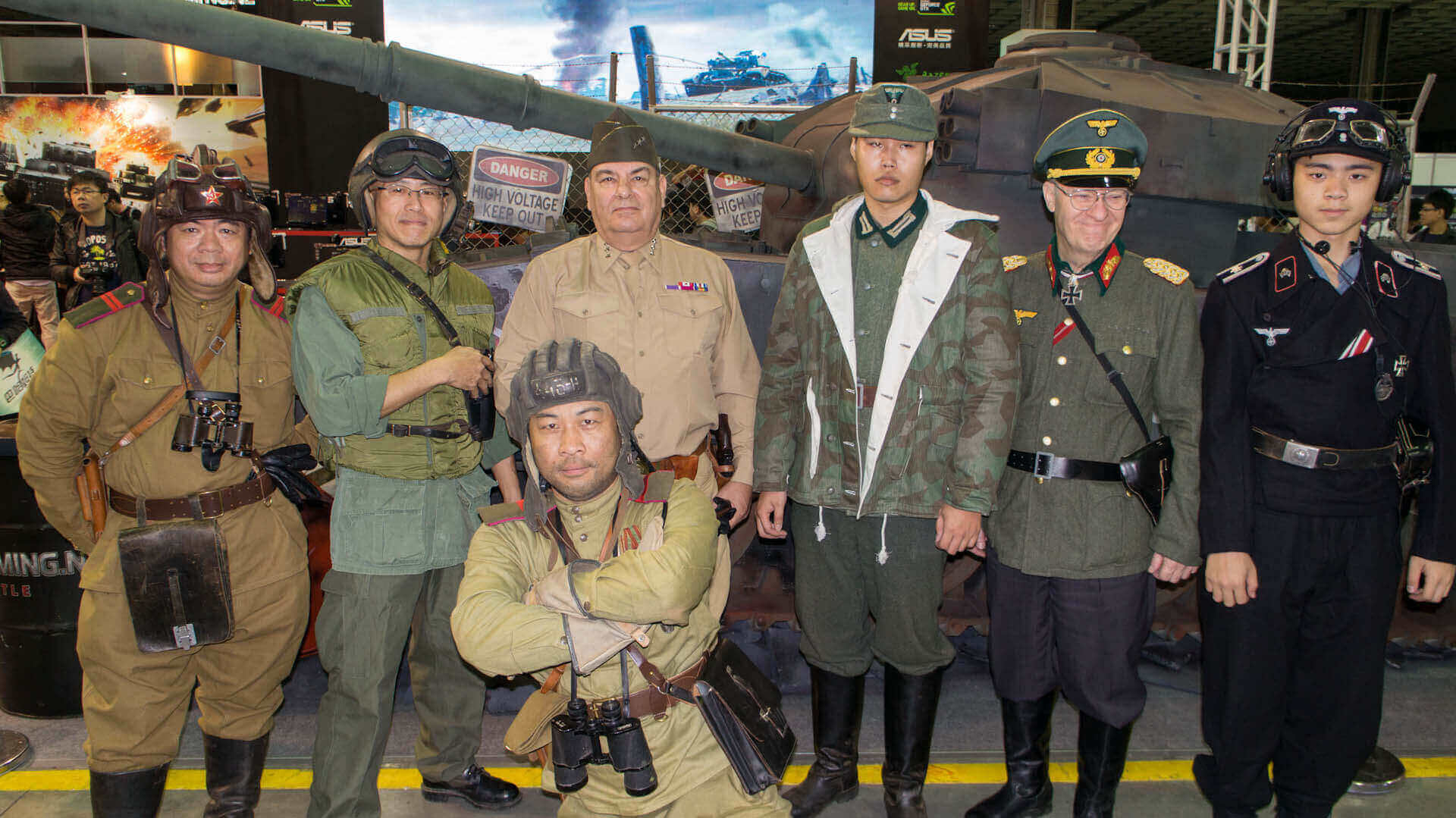 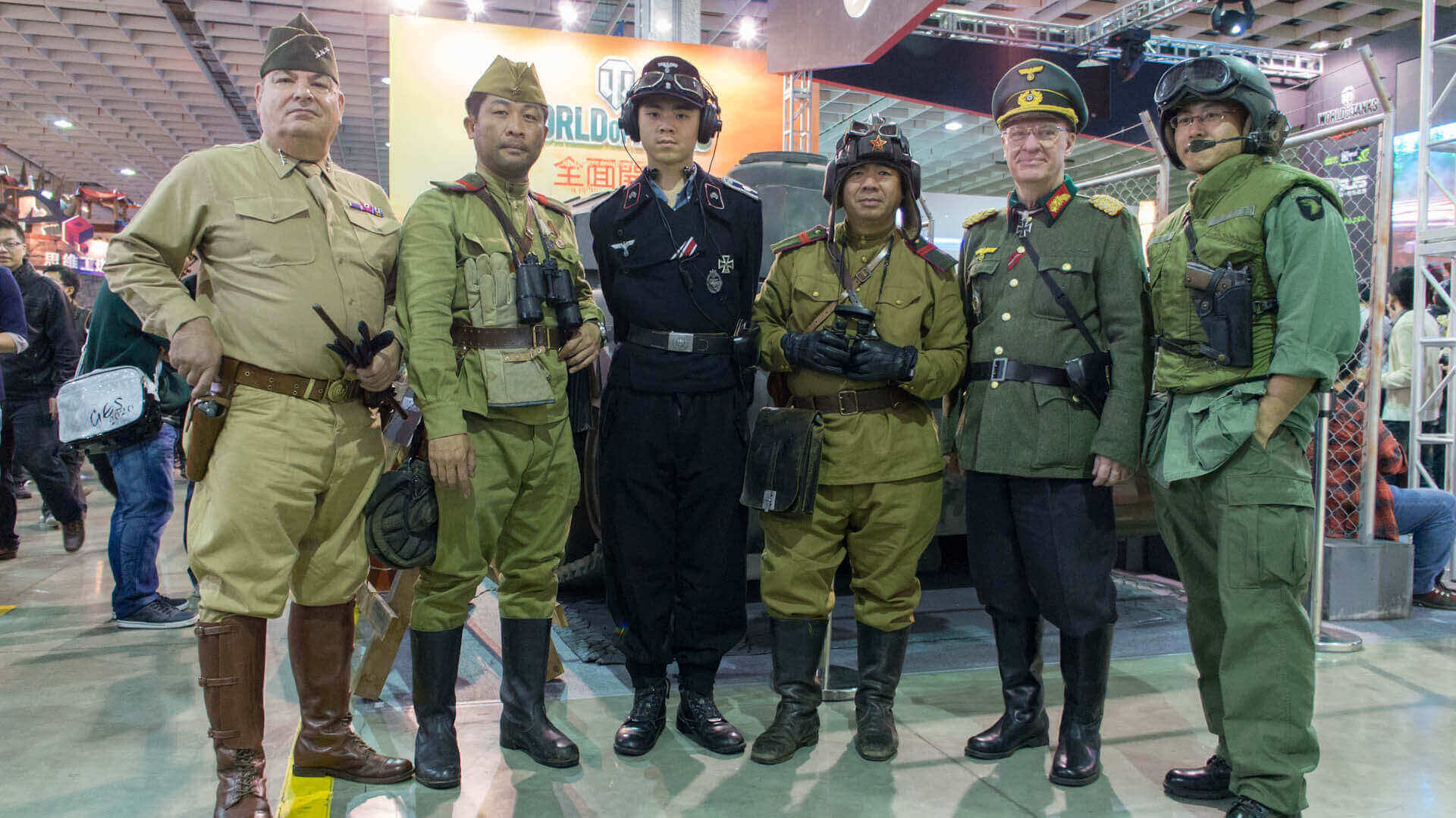 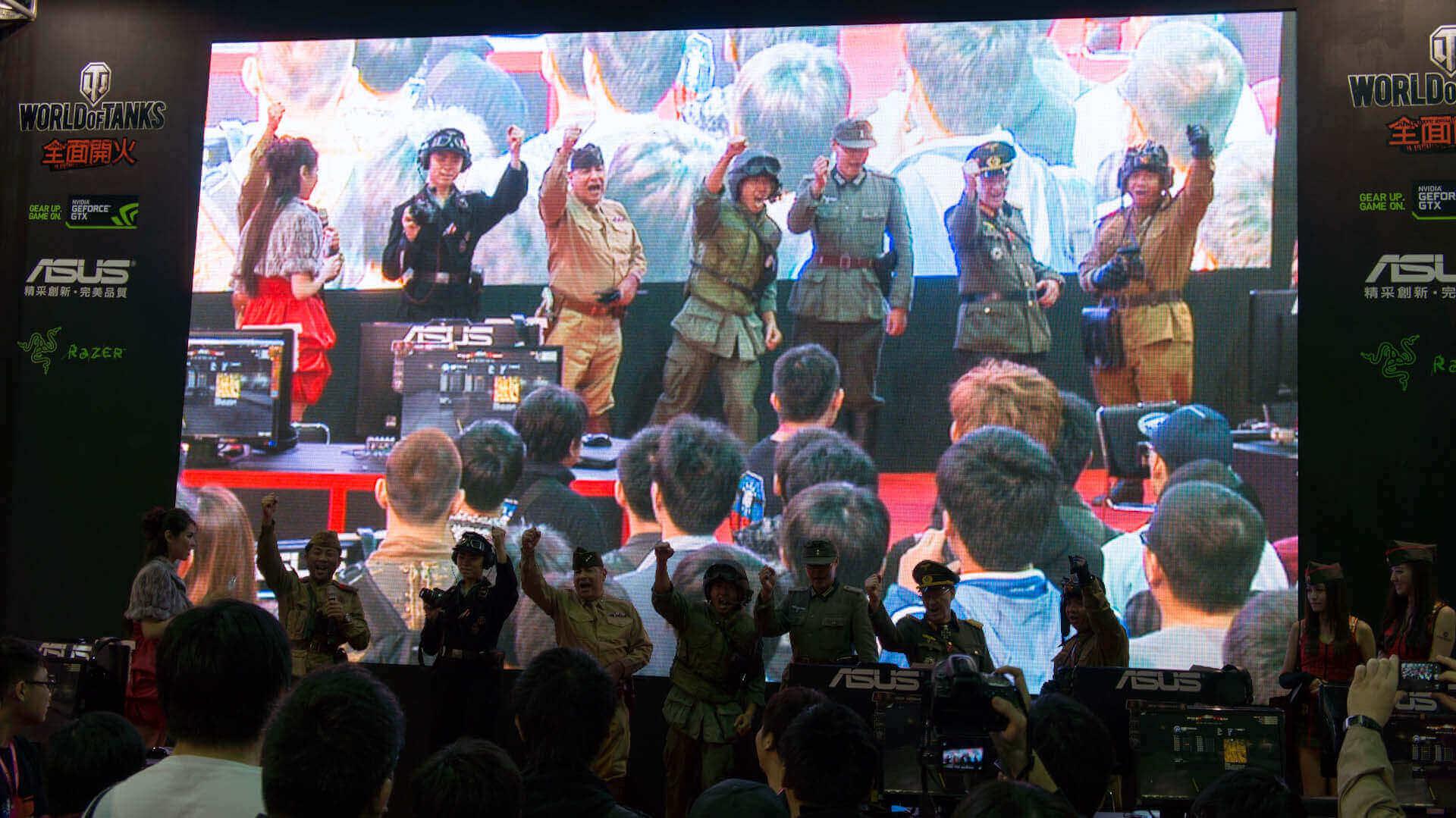 World of Tanks is the BEST!

Now our Tank Girls have gotten themselves some super powerful teammates - the "real" soldiers from World WarII! Perhaps these historical people have spent too much energy on time travel, and also the fact that there was no such strange steel contraption called “mouse” at that time so the audiences took this to their advantage over the Tank Girls team. But judging from the smiles on everyone's faces, it didn't really matter who won the match. 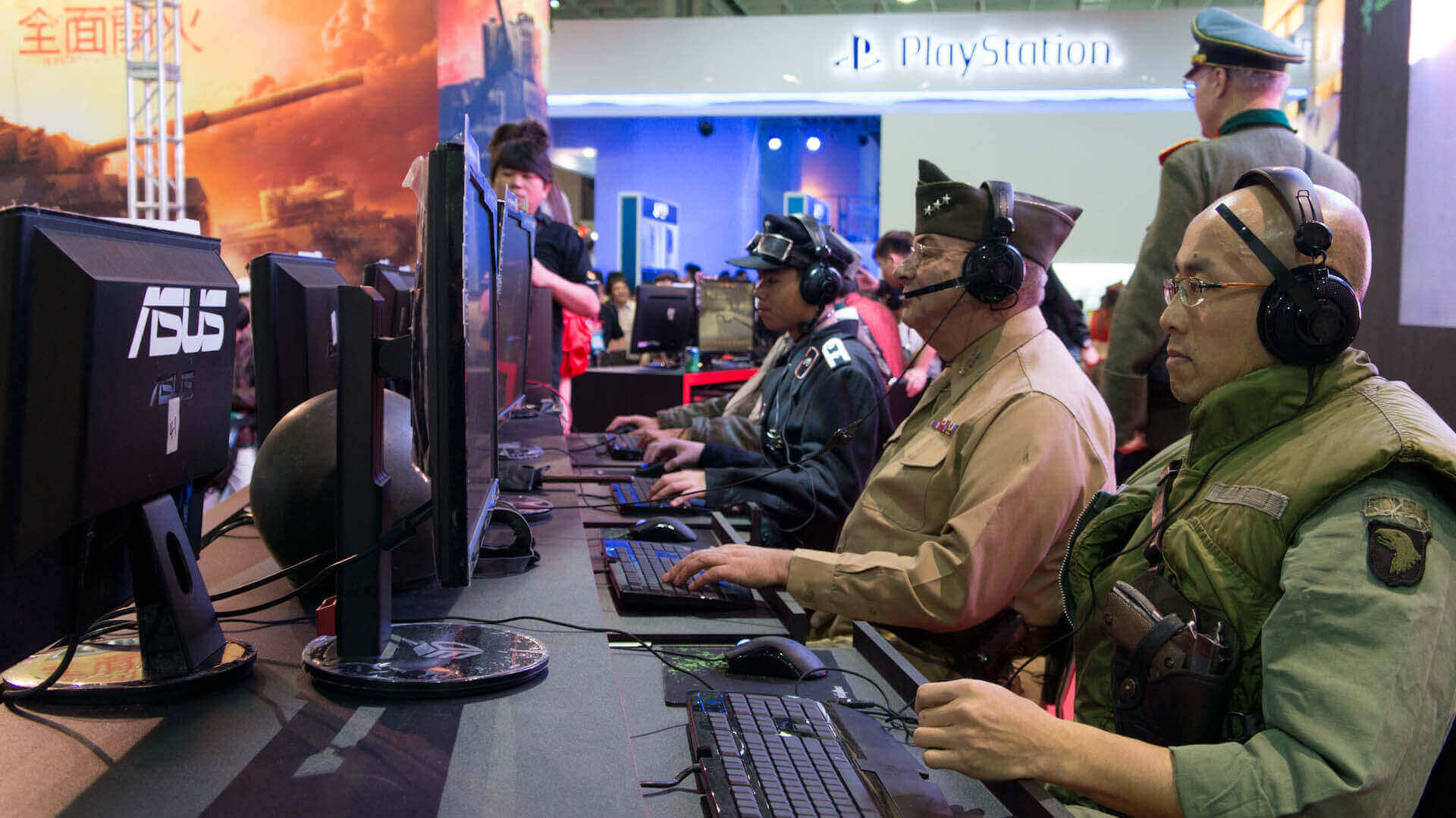 How often do you get a sight like this? 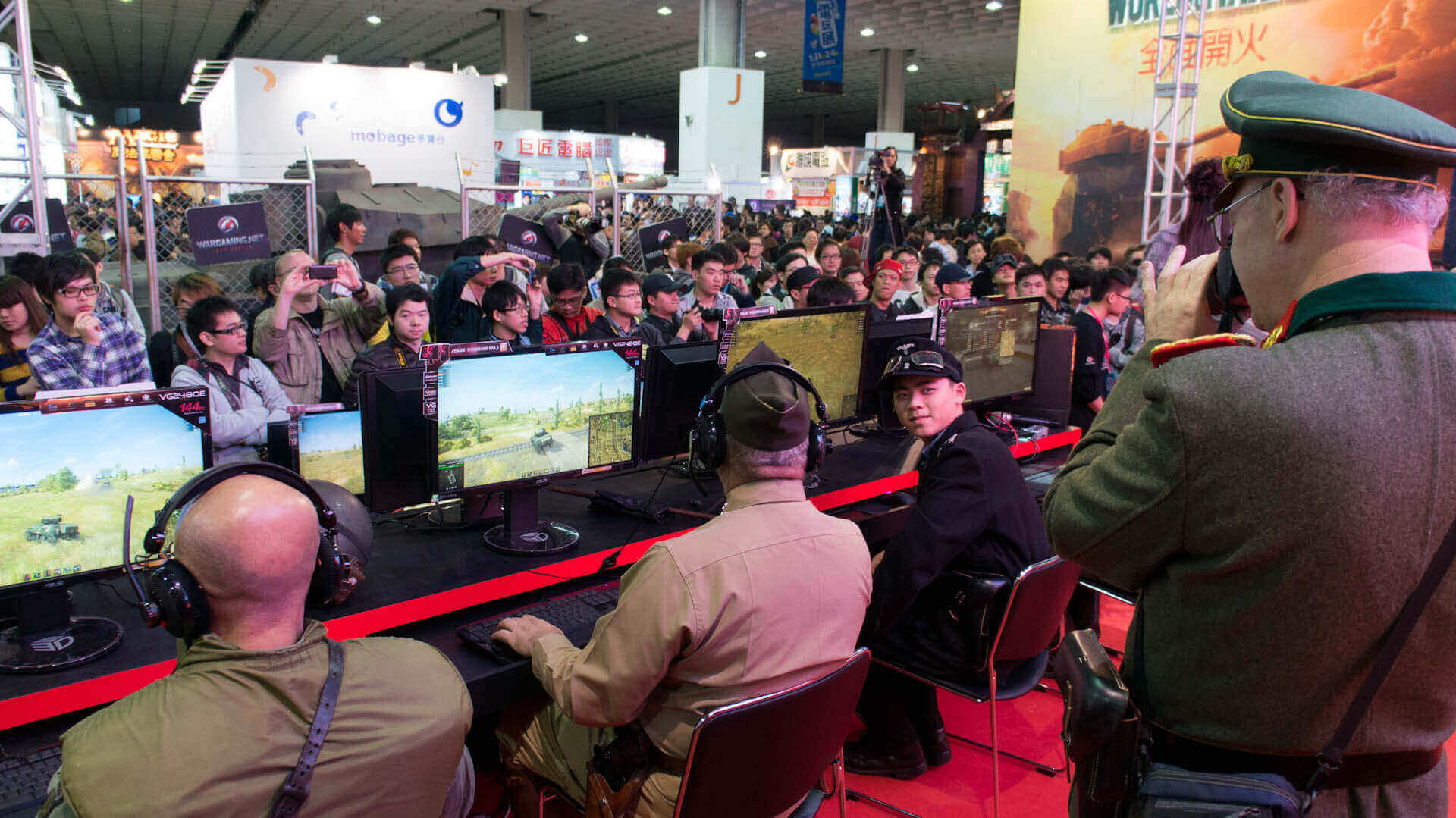 World of Tanks is a teamwork based game and Taipei Game Show is one of the best platforms to showcase the excitement of the game in a game between high level clans. We invited 6 well-known clans in Taiwan for some exhibition matches so audiences can have a chance to witness how pro gamers can switch and excute different strategies in a blink of an eye. 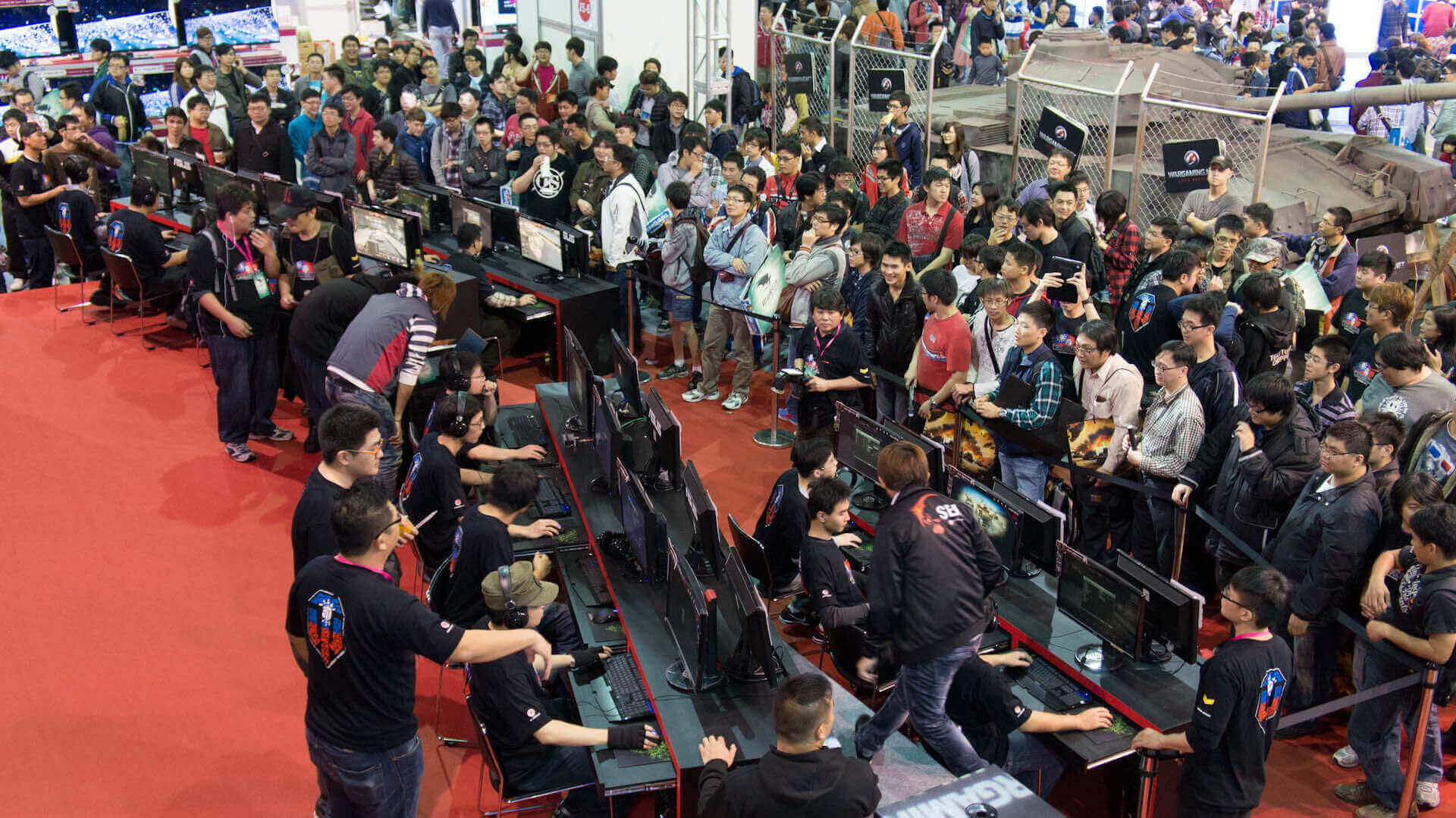 We bring the real Clan Wars to the Wargaming.net booth 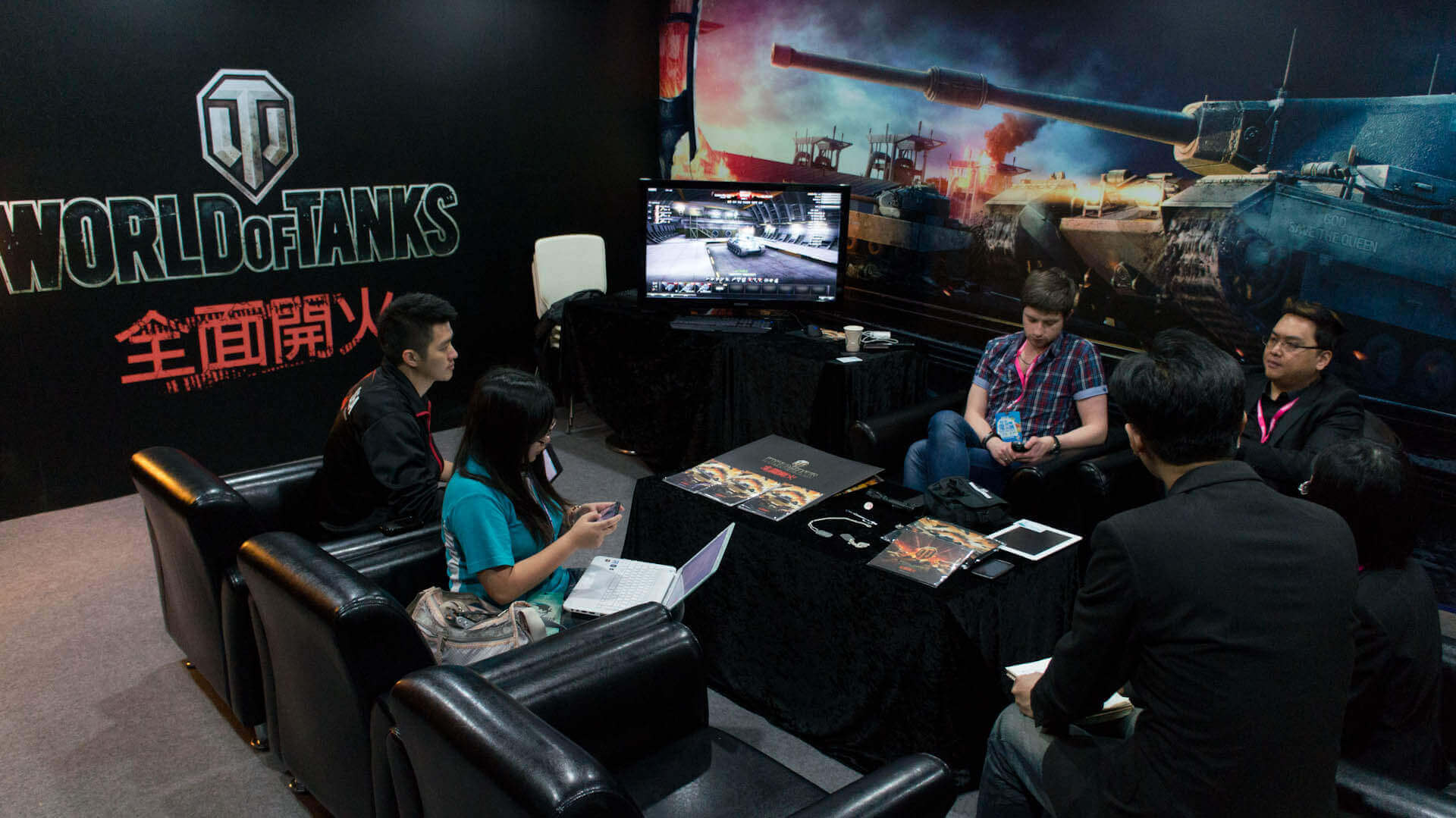 While the clan members are fighting outside, Jasper and Max are also doing their best in interviews with the media

The clans continued to give the audience a great display of battle and breath taking fights. They also showed how realistic the game engine was to all the visitors. During one of the fights, we could see two heavy tanks rushing and crashing into another tank which was busy aiming at another SPG. Tracks were destroyed, sparks flew and things fell over onto the ground upon impact. Gamers were all really amazed about how World of Tanks could provide such real scenarios of the battle field that has never been seen in other games. 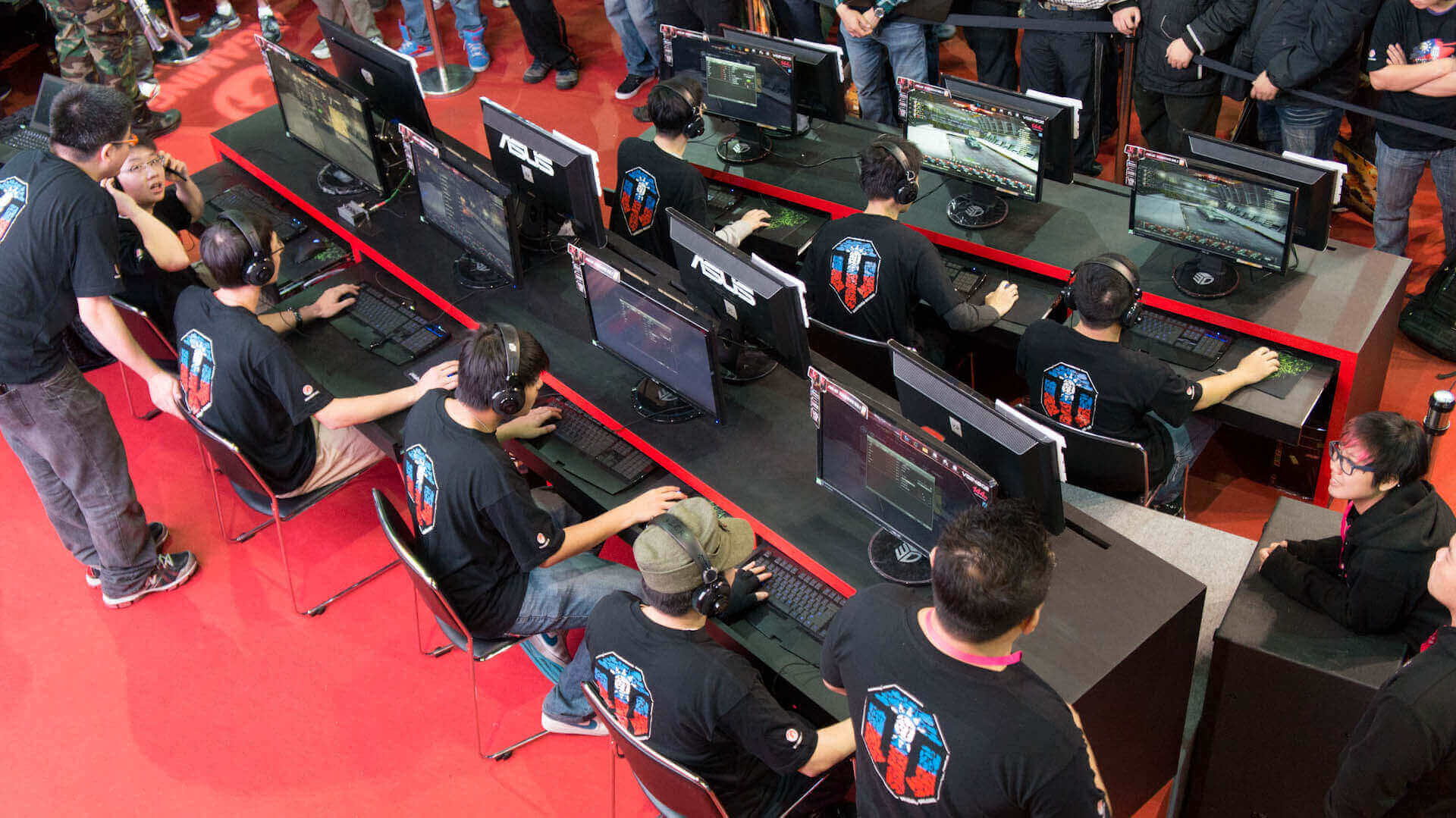 Day 4 report will be coming right up shortly and more visitors mean a more exciting event. Get ready for the Battle!