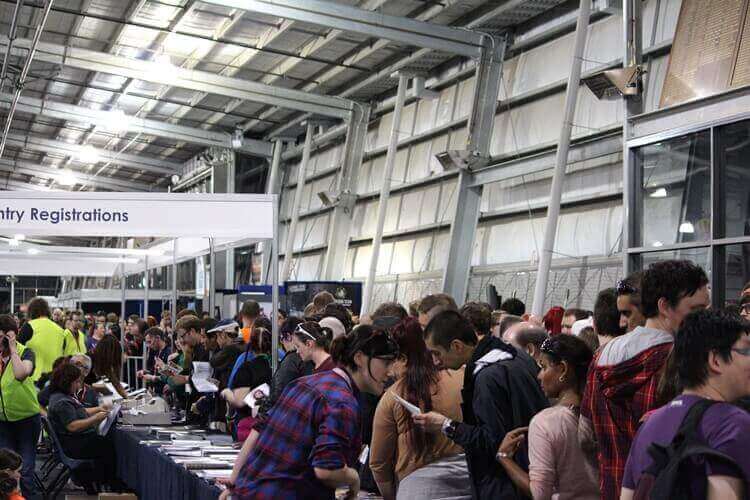 Supanova Melbourne, 13 April, 2013 (Saturday), 08:30 hrs - The World of Tanks SEA team arrived this morning at Melbourne Showgrounds to be greeted by the sight of a crowd of event goers forming outside the expo. Although we had arrived early to prepare for the Supanova Tournament, a snaking queue had already formed at the entry registrations booth and everyone was eager to gain access into the biggest pop culture expo to ever hit Melbourne. From storm troopers, loli-clad teenage girls sporting nekomimi (cat ears), characters from popular anime, you name them, we've probably seen them. 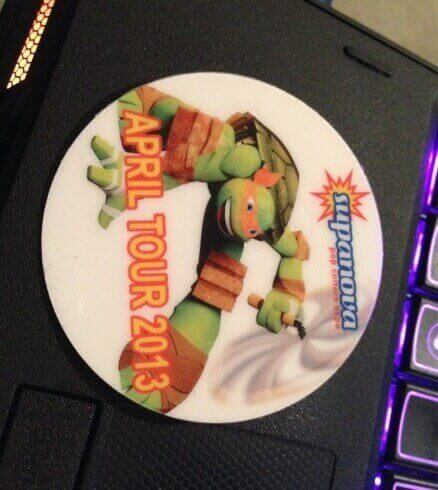 WoT SEA Team Braves the Crowd... Not -The team made our way past the crowd into the event hall (yay for our ninja turtle event pass) and made a beeline for our Wargaming booth. The Wargaming booth, being the largest in the entire exhibition was easy to spot as it came with 2 huge backdrops of World of Tanks, a large LED monitor and a stage. By then, the setup for the day was almost ready and some of the tournament players were already onsite and mingling with one another while the technicians worked vigilantly to ensure that everything was in place for the tournament.

Something Always Hits the Fan, 10:00 hrs - Red Alert! Uh-oh. Just when things seem to going along well, we were informed of some technical difficulties which caused the tournament to be delayed a fair bit.

Grumpies get "Grumpy", 10:20 hrs - Overheard from a member of Team Grumpies:

How bout we come back tomorrow morning and you take us out for beer now.

We cleaned the fan... kinda, 11.30 hrs - Sorry for the wait! Now let's get this show on the road. The live stream comes on and preparations are underway to get Match 1 up and running.

The battlefield was bathed in a sea of purple, 12:20 hrs - Mostly Purple wins another round, sealing their first victory of the day.

13:30 hrs - Match 2 ends with a score of 2 to 0 in favour of PBKAC. During this interval break, we decided to muck around with a storm trooper while waiting. 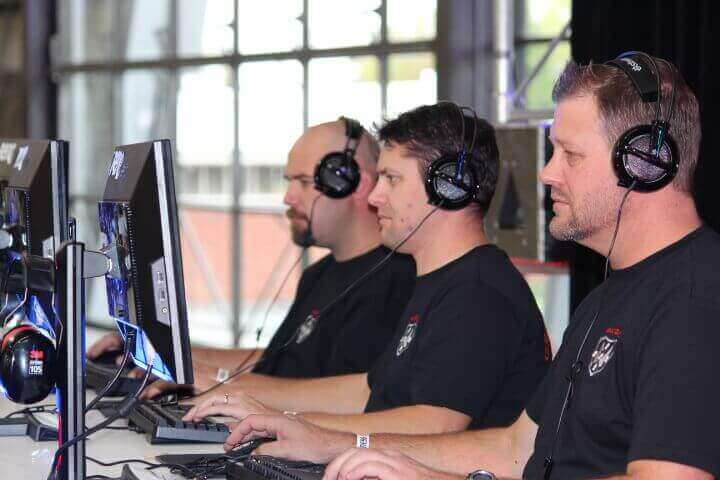 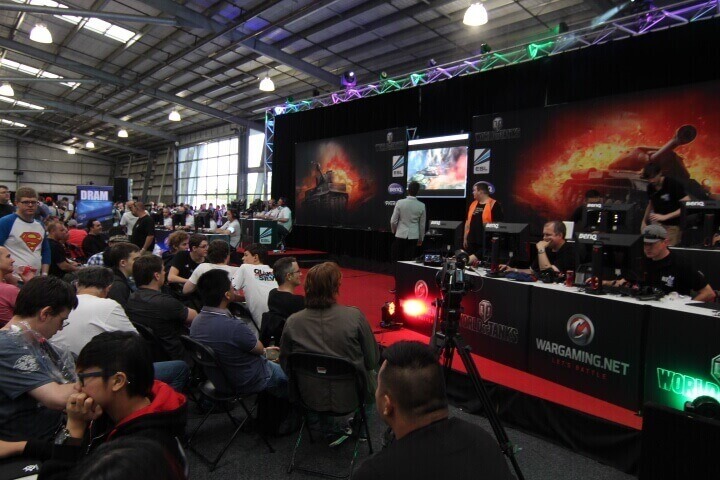 14:00 hrs - Match 3 starts between PBKAC and Mostly Purple. PBKAC decides to take on a defensive stance and cover as much ground as possible but things take an awry turn during a bad engagement and MP gains an upper edge momentarily. However, PBKAC pulls through  and takes the first round by eliminating their opponents.

14:15 hrs - Round 2 of Match 3 kicks off! Both teams decide to sit back tight and wait for a golden opportunity, for whoever makes a mistake first is going to be placed at a disadvantage. After what seemed like a long wait, the opportunity shone for PBKAC as they swiftly picked off their opponents one at a time to end the match with a score of 2:0.

15:00 hrs - Round 1 & 2 of Match 4 between Thunder and Mostly Purple ends with one point for each side, resulting in a draw. MP decided to adopt a more offensive gameplay during Round 3 by swopping in the AMX13 90 to replace the T69. With 2 Tier VIII tanks left on both teams, the atmosphere was intense as the audiences waited with bated breath in anticipation of what was to come. The decision to swop the T69s paid off for MP as they took the match with a score of 2:1.

15:55 hrs - After the interval break, we're back with Match 5 - Thunder vs TDC. The match was over quickly with Thunder taking both rounds. A highlight of the match was when Thunder prevented TDC from capturing their base by pushing the tank out of the capping zone, a sight which incited laughter from the audiences. 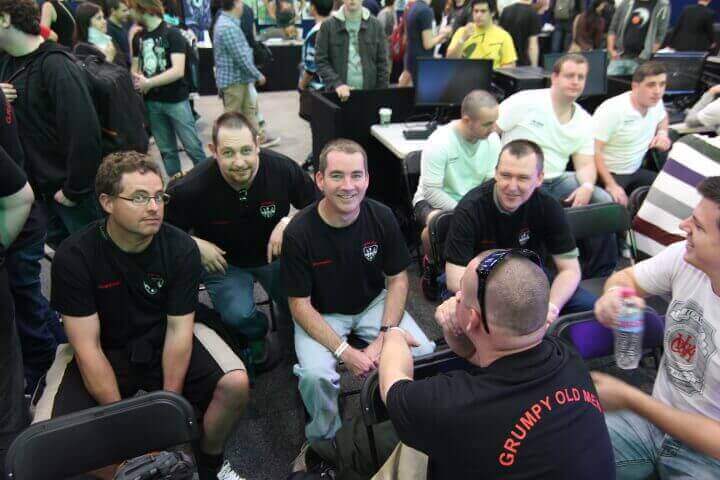 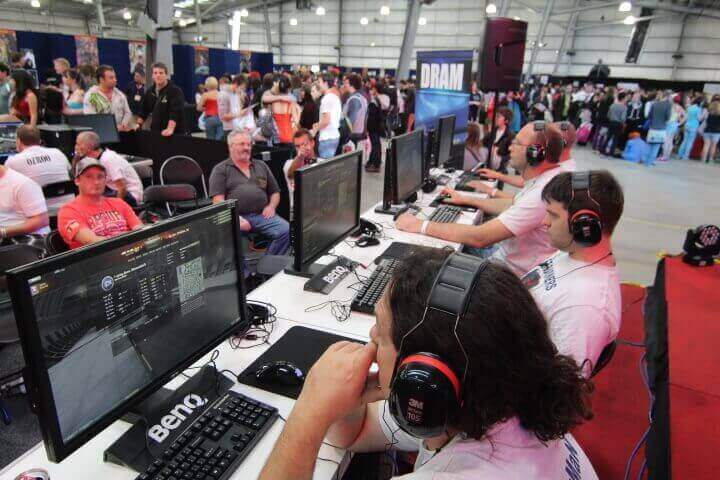 17:10 hrs - Group B matches finally kick off! In the first match up of Group B, we have Team Grumpies, a familiar face in the WoT competitive scene taking a point over PBCAK. We stole a quick glance over to Team PBCAK and the guys appeared to be flustered but perhaps they have something hidden up their sleeves to deal with the Grumpies next round?

Round 2 started off fast and furious with a 4 tanks engagement but due to a dropout from one of the players, the match was restarted. Grumpies further reinforced their formidable reputation as a force to be reckoned with by taking a win over PBCAK, ending the match with a final score of 2:0.

18:00 hrs - The Grumpies added another victory by defeating Drop Bears in Match 2 of Group B with a score of 2:0,

With this match, we conclude today's tournament. The remaining matches shall continue tomorrow, 14th April to determine the 2 teams from Group B who will advance to the grand finals to battle against Thunder and PBKAC from Group A who qualified. Join us tomorrow when we crown the champion!