It’s Time for the GeForce eSports Tanks National Championship! 27 April, 2013 (Saturday), 12:15 hrs - As the team made our way to the tournament venue, weaving in and out of the heavy traffic of cars and jeepnies, all eyes were on the thermometer in the car which told of the weather in Manila today. Temperatures have reached a high 41 degrees Celsius (we can probably cook an egg on our foreheads) but sweltering hot as it may be, the Filipino Tank Commanders seemed to pay no heed to the humidity and gathered in front of cybercafé to engage in friendly banter. Perhaps even fired up by the scorching heat, they appeared in the highest of spirits and their faces exuded nothing but smiles and confidence. 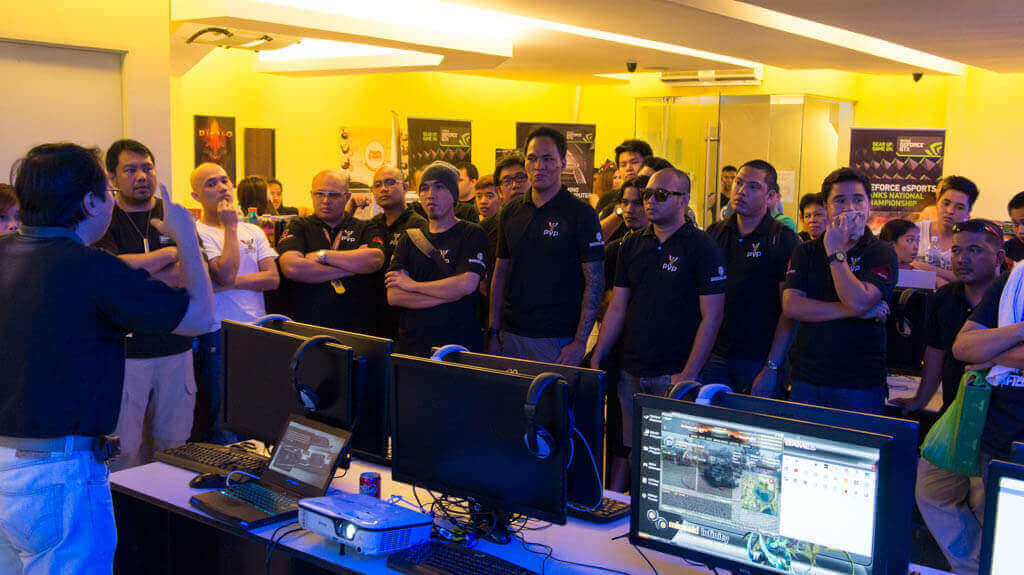 Roll Out! 13:20 hrs – We invited Mr Glenn Paul Serrano, a representative from our sponsor, global graphics processing unit manufacturing giant Nvidia to come forward and give a short presentation. 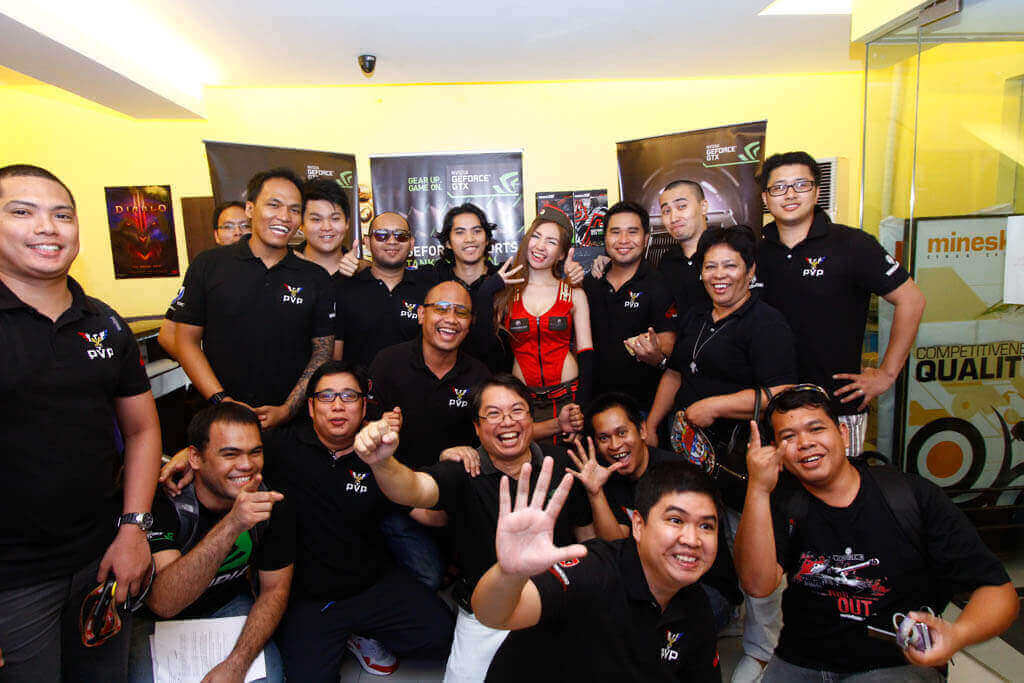 Say Cheese! 14:00 hrs – While some of the players were busy making preparations for the tournament, another bunch of of them were busy taking photos and making the event a memorable one. Altogether now, CHEESE!

Celestial Intervention, 14:30 hrs – Let’s Battle! It’s time to roll out and bust some tanks! The participants were all geared up and ready to go. By then, the skies outside were beginning to darken as though forboding of the harsh and perilous battles that lie in wait ahead.

With engines revving and shells loaded, we braced ourselves for the first boom to drum through the battlefields. And then it came. BOOM! The lights flickered. A loud rumble trembled through the cybercafe. And then there was darkness. Cries of “OOOOH…!” echoed through the air as the computer terminals all restarted in unison.

It appears that there was a power trip which was trigerred by lightning from the sudden downpour. Moments later, another lightning strike and thunder followed and one more wave of “OOOOH…!” could be heard uttered from the cybercafe. Due to the lightning strikes, the internet was badly affected and the tournament was delayed.

15:00hrs – The commentators took the time to warm up while the issue was being rectified,. In the meantime, we were subjected to repeats of Psy’s Gentlemen song as it was put on replay over the PA system. (Mother, Father, Gentlemen!)

And we’re back! 16:30 hrs – The tournament has now been resumed and it’s off we go in map Live Oaks! One minute into the round, the first shot is heard ringing through the air. Team MUDHOUSE gets picked off one by one individually as they failed to detect team PVP’s scout and came under heavy artillery fire from their opponents.  PVP takes the first round in a dominating fashion thanks to their scout and arty combo and scores the first point of the tournament.

Round 2 kicks off to a slower start as PVP takes control of the river once again but MUDHOUSE decides to adopt a different approach this time by moving away from there and taking position in the town. 3 minutes into the round, both teams are down by only 1 tank. MUDHOUSE manages to spot 2 PVP tanks and opens fire. PVP comes under heavy fire but manages to avoid losing a tank and instead take out another tank from MUDHOUSE to give them a lead in the number of surviving vehicles. The game progresses uneventfully without further tanks being destroyed and the round ends when the time runs out to results in a draw. PVP is awarded the win due to the calculation of tiers of the remaining tanks.

MUDHOUSE vs. Blue-Jabb, 17:25 hrs – Round 1 between MUDHOUSE and Blue-Jabb ends in a draw after the time runs out and Blue-Jabb is awarded the win based on the tiers of the surviving tanks. Blue-Jabb also takes the win for Round 2 after another draw to bring the score to BlueJabb 2:0 MUDHOUSE.

PVP vs. Blue-Jabb, 18:09 hrs – Match between PVP and Blue-Jabb commences. Both teams are currently tied based on the points system after their wins over MUDHOUSE in the previous 2 matches so this will probably be the match that will widen the gap and give an added advantage to the winner for Round Robin 2.

Blue-Jabb surprises PVP and the audience by adopting an all-out frontal assault by rushing to PVP’s base at the start of the round. They successfully take out 3 of PVP’s scattered members, forcing the remaining PVP members to withdraw from their stationed positions and come together to defend their base from the advancing Blue-Jabb forces who were rushing in like a herd of wild bulls. This decision proved to be critical as PVP successfully repels the assault to secure their win for the round.

During Round 2, PVP are on their toes now and know for a fact that Blue-Jabb will try to deploy the same strategy again, therefore they improvised and decided to stick together to face Blue-Jabb off as a full team. As expected, Blue-Jabb came rushing in again and a huge clash ensued. The fight was over quick and when the smoke cleared, Blue-Jabb remained standing. Their brute force tactic caused quite an uproar among the audiences as the spectators cheered and hooted and the members of both teams stood up to exchange mock taunts at each other. The excitement was building up in the air and the crowds started to inch forward and gather around in the hopes of getting a better glimpse of the matchup in the final round.

Another head on clash erupted in Round 3 but this time, PVP emerged the victor, thus making the team undefeated in Round Robin 1. The final score is 2:1 in PVP’s favour.

RR2: PVP vs. Blue-Jabb, 18:45 hrs - Blue-Jabb goes up against PVP once again for Round Robin 2. Clearly, these 2 teams are engaging in bouts of brute force as both will rush head first into battle and clash in a huge slugfest in the middle. As simple and straight forward a strategy that this may be, the audiences are loving the fast and furious action and lapping it all up judging from their loud cheers. The last slugfest ended with a final score of 2:1 in PVP’s favour. It’s quite plain to see that PVP’s strengths, besides the individual skills of each player, is their quick adaptability when faced with unforeseen circumstances and their impeccable team work. These are without a doubt, some of the main points which has contributed to their victories.

RR2: Blue-Jabb vs. MUDHOUSE, 19:40 hrs - Final match between Blue-Jabb and MUDHOUSE. Perhaps because it's the last match for the finals, the atmosphere was quiet save for the commentators' voices and the occasional shout coming from one of the teams. Round 1 ends in a draw and the win is awarded to Blue-Jabb based on the total tier of remaining tanks.

8 minutes into Match 2, MUDHOUSE is down to 5 tanks and Blue-Jabb 3. Shortly after, MUDHOUSE claims their first victory of the tournament. With the conclusion of this match, PVP claims the championship title based on the points system for having won all their matches while Blue-Jabb and MUDHOUSE are locked in a tie. Thus, the tournament has been extended by one more matchup between these 2 teams to determine the 2nd and 3rd placing.

In the tie-breaker match between Blue-Jabb and MUDHOUSE, MUDHOUSE turned the tables around to defeat Blue-Jabb to claim second place in the tournament. Considering that MUDHOUSE was off to a bad start in the tournament losing all their matches in Round Robin 1 and then again to PVP in Round Robin 2, they have defied the odds and climbed their way back up to the top to take second placing. Well played, MUDHOUSE!

Here are the winners of the GeForce eSports Tanks National Championship. Congratulations to all teams!

This concludes the tournament. Although the journey today has been fraught with perils, everyone has perservered to bring forth such an exciting and memorable tournament. Thank you for staying with us to the end, Tank Commanders! 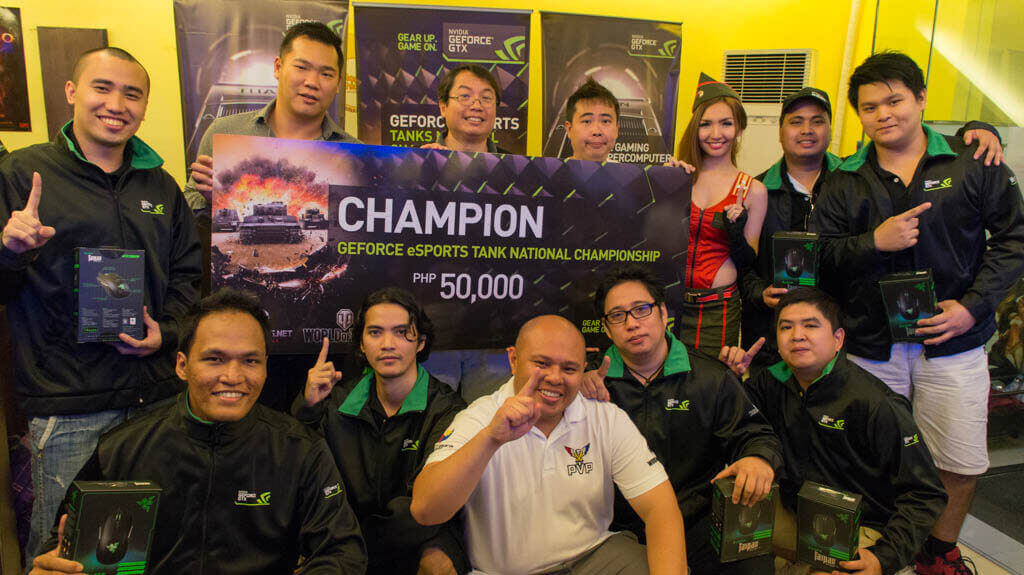