It's no secret that our World of Tanks players in Taiwan were eagerly looking forward to the next on-ground event, especially after after the successful military academy and base opening events on 29th March and 31th May. On 23th November 2014, Wargaming fulfilled that wish by taking part in the opening event of Zuoying naval base, located in southern Taiwan.

Both players and casual visitors alike streamed into the venue on the day itself, rapidly filling the air with excitement and eagerness about what they were about to experience. To cut a long story short, everyone present fully appreciated the abundant programs arranged by Republic of China Navy (Taiwan Navy) and Wargaming. One program in particlar, the 'Let's Battle Photo', attracted more than 500 WoT players to participate, which became one of the hottest topics of that day.

Incidentally the last base opening event in Taiwan of this year, the opening of Zuoying naval base allowed many that stayed in the southern parts of Taiwan the opportunity to view the various weaponry, combat equipment and battle drills utilised by the army, navy and air force in a single day. Although meant as a fun-filled day out for the family, the overall objective of this event was to win the support of the people and educate them about the navy in general.

There were lots to see at the land equipment exhibition area, including TOW missile launchers, a CM11 tank, mobile communication stations, MIM72 Chaparral launchers and other equipment currently in active service. Over at the navy drill area, spectators were treated to a view of the high speed formation by Kuang Hua VI-class missile boats, flypast and sonar dipping drills by navy anti-submarine helicopters, minehunter formation drills and AAV-7A1 amphibious vehicles assaulting drills.

In addition to dynamic displays performed by military hardware, there were also rich static displays available. The Naval Fleet Command of Taiwan Navy arranged for several warships to be exhibited for visitors, including a Knox class frigate, a Oliver Hazard Perry class frigate, one La Fayette class frigate, a Newport class LST-233 and a Kuang Hua VI-class missile boat along with some others. Visitors who boarded the vessals were greeted by professional officers stationed on the ships, who introduced ship capabilities, weapons, underwater equipments and special force assault boats to the visitors.

Throughout the duration of the event, over 1,000 people took the time to visit the Wargaming booth, where they had the chance to interact with the T91 rifle simulators and take part in a lucky draw. Winners received premiums for World of Tanks and World of Warships (which would be available as a Closed Beta Test next year).

The most important program by far is the 'Let's Battle Photo', featuring more than 500 WoT tank commanders taking a photo with us in front of a La Fayette class frigate.

The T91 rifle simulators at the event fully mimicked the look and feel of the real thing, and is used as a training rifle in service by simulating the shooting and recoiling of the real thing. The lucky draw at the Wargaming booth was also a hotspot for many visitors hoping to win premiums for World of Tanks and World of Warships.

The Taiwan military base opening events for the year may have ended, but Wargaming will hold more exiciting and unique community events for our great tank commanders and captains! 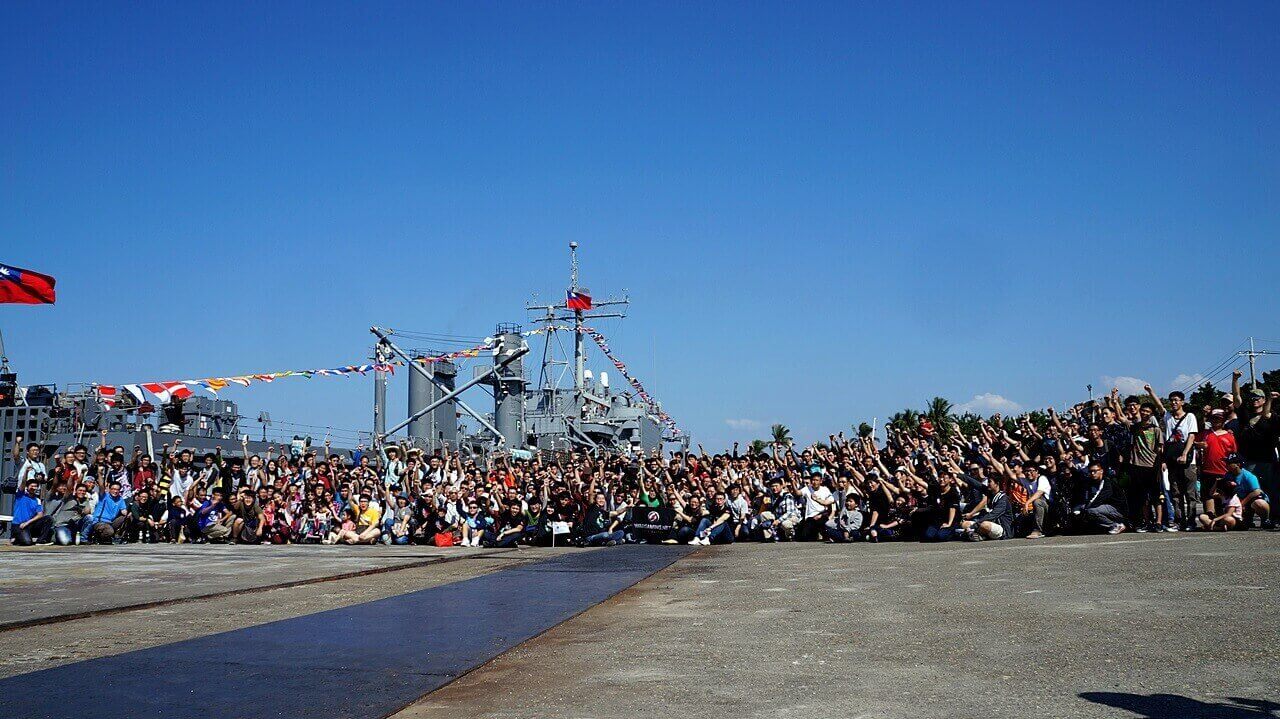