Also, there is a photo area that displays a detailed gun turret of the YAMATO battleship, and a special play room featuring the battleship YAMATO as a surprise exhibition. Those, of course, attracted a huge crowd.

We will report the first business day of Tokyo Game Show 2014 here.

Please check the link below for the stage programme and event merchandise!

WG Show Girls appeared in front of the battleship Yamato`s turret at the Wargaming booth. Other than Tank Girls, Warship Girls represented "World of Warships" dressed up in cute outfits inspired by sailors.

Wargaming stage event started with a speech by Wargaming.net's CEO, Victor Kislyi. Victor was thankful for the Japanese player community that is growing at the fastest pace in the world, and then he announced about new collaborations.

First up was the collaboration with the movie Fury coming this fall. The preview with Japanese subtitles was released for the first time in Japan.

Subsequently, he talked about a current collaboration World of Tanks and Girls und Panzer. A limited edition Girls und Panzer MOD (voice and vehicle skin MOD pack) was announced. This pack is limited for first 30,000 people, so keep your eyes out for upcoming news!

Last but not least, a new collaboration between Wargaming's upcoming title World of Warships and TV animation Arpeggio of Blue Steel -ARS NOVA- was announced as big surprise. Takeshi Minami (producer of Arpeggio of Blue Steel -ARS NOVA-), and voice actress Mai Fuchigami (as main character, Iona) steps up to the stage. They announced that they will collaborate the girls with World of Warships from now on, but not with tanks. Mai Fuchigami , also known from the collaboration with Girls und Panzer, will be involved in this new collaboration too. 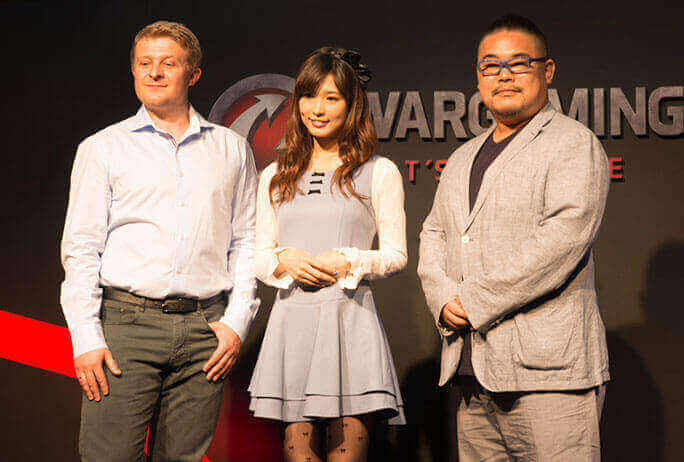 In addition, a secret live performance by “Trident” Mai Fuchigami (as Iona), Manami Numakura (as Takao), Hibiku Yamamura (as Haruna), a idol unit formed for the anime Arpeggio of Blue Steel -ARS NOVA- will be held on the second public day (Sept. 21).

This will be available for viewing on livestreaming via Wargaming booth channel on Niconico. Don't miss it. Check it out!!

On the special stage of new title World of Warships, Iwan Morozov (Global Operation) takes the stage, he gave a summary of the game (destroyer, battleship, carrier. Vessels in Tier I-X) and a introduced part of Japanese tech tree.

After that, Tatyana Sagirova (Quality Assurance) and Tadamasa Miyanaga (Military adviser for Wargaming Japan) introduced how World of Warships was been developed.

They explained World of Warships has been developed at the studio in Saint Petersburg which is home for the Russian Navy, and how battleships in the game was created by using battleship Yamato as an example.

They also mentioned that research documents were sourced only from the internet when they started developing. The research materials from Japan were really useful.

First business day on Tokyo Game Show ended on a high note from the announcements of new collaborations.

Please check for the programme on Friday, 19th September.

Those who can't make it to Tokyo Game Show 2014, don't fret! Throughout the 4 days of the event, there will be a livestream feed showing everything going on at the venue! Also, keep an eye out for the keywords appearing throughout the show. The first 15,000 users to find out the code will be presented with a week's worth of premium time! Be sure to check out all the shows!