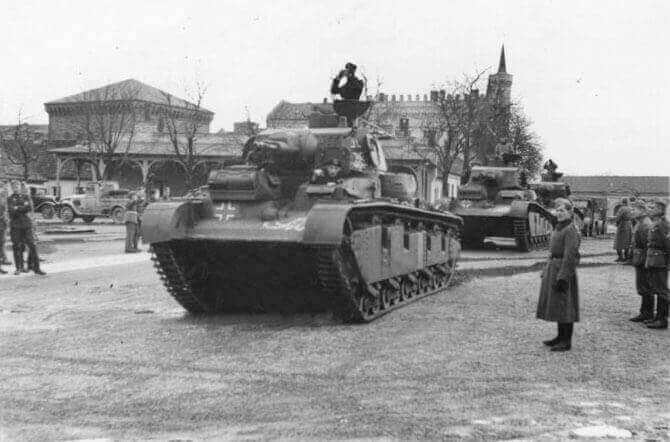 Quiet Norwegian city was shuddering – with thunder, horror, unimaginable sight while several monsters were marching along the streets.

Correspondents took the places trying to make as much more vivid pictures as possible. The streets were narrow and they couldn’t find the right angle in order to capture the monsters in proper manner.

When these powerful vehicles had been shipped the Germans decided to demonstrate its renewed tank strength to the rest of the world.

The tank looked really scary. It was called NBFZ, Neubaufahrzeug (German for “new construction vehicle”) - the brainchild of the “Rheinmetall” company of the year 1933.

One year later, in 1934, the Krupp company took up the baton and produced three vehicles - with heavy armour, three “heads”-towers, bulky superstructure under the machine gun turret. Twenty-millimetre-thick armour, obviously, was weak for so solid tank. 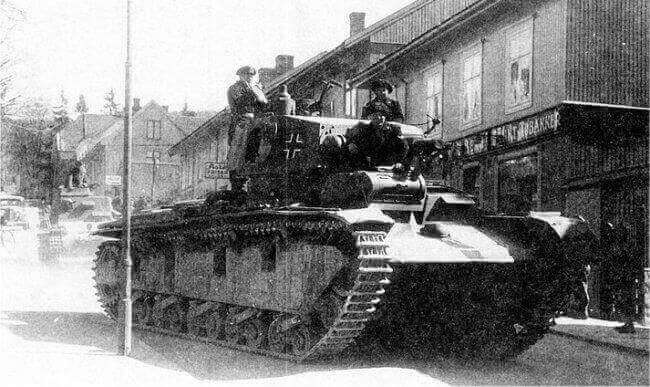 But there was an abundance of hatches: eight for crew and four for the service.

The tank was a true war machine, its mechanical deity: developed to destroy the walls, to fight against armoured targets, to hit the enemy’s manpower.

Action group commander subaltern lieutenant Horstmann was rightly proud of his vehicles. He had three of them.

The day after the parade in Oslo Horstmann unfolded with crunch the paper and nodded with satisfaction.

Every country in the world saw the photos of German super-heavy vehicles. Tanks were with confidence as the true lords of the world moving along the streets. They introduced a new era.

Norwegian Campaign began - it was developing in accordance with the German invasion plan “Operation Weser-Exercise”.

- Did you see that, comrade Pavlov? - Comrade Stalin personally addressed himself to the Chief of Tank-automation command, Lieutenant-General Dmitry Pavlov.

Meeting with Stalin was prompt and short.

Pavlov ran a hand over his shaved head, nodded. The paper lay on the table with the picture on top: three-headed German tanks literally hit in the eye with their power.

- Germany is arming, - said Stalin, and it wasn’t clear if he admired unreliable “pact partners”, or tried to hurt the interlocutor. Ambiguous tone of his voice frequently confused. - And what’s about us, Comrade Pavlov?

Germans liked to print in their papers not very clear, but numerous photographs of assembly departments. It created an impression that Germany was at any time ready to belch out on Europe a sea of mortal track-laying vehicles.

And there, in these factories, three-turret NBFZ were being created, of course. Numerous NBFZ. And Europe should not know the fact that there were only three of them.

And Europe didn’t know ... But not everyone in Europe was daunted by this.

Veteran of the Spanish Civil War, Dmitry Pavlov with his own hands felt the tank on action, as the phrase is.

- I think, Comrade Stalin, - he said - that we are very well armed. We create tanks with diesel engines, shellproof armouring and guns, able to penetrate the shellproof armouring of enemy’s tanks. Outdated T-26 tanks are reserved for infantry as accompanying ones. A new generation of tanks is going out into the fields.

- And if we also take a three-turret tank as a basis? - Stalin screwed up his sly eyes.

Pavlov considered the work on the “monster” a waste of time in general and got away with polite irrelevant comments. Unlike most others, he wasn’t being seduced about Germany: the war with this enemy is the question of time only.

But Pavlov as the Chief of Tank-automation command examined photos carefully and ordered to include the appearance of the tank and its approximate data in the combat identification booklets of a potential enemy.

Soviet specialists ensured themselves against any risks. Battle stats of NBFZ in their description were greatly overrated. However, on the Soviet-German front, these tanks did not act.

It was better to prepare for the worst, though!

Early in the morning Horstmann, in accordance with the order, set out with his three-turret tanks towards Hamar.

Horstmann’s battle group was attached to a 196-th Infantry Division.

Norway looked as an unfriendly country, unfriendly to tanks, anyway. Therefore Horstmann looked at it with disgust.

At the same time, he felt himself like a research scientist because he with his tanks had to find out how difficult it is to operate in mountainous terrain.

"For the militaries, there is nothing sweeter, - said Herr Schnitt, Horstmann’s old teacher, retired colonel and one-legged veteran of the First World War, - than put your own beautiful theories to the test in the field".

Whereas according to the theoretical calculations of European smarty-pants, the use of tanks in difficult mountain conditions was impossible of itself. Well, it is a challenge and an occasion to raise and decide in field a number of issues.

Norway had a few light tanks, perhaps ten? In any case, the Germans didn’t manage to see these vehicles: they easily crushed any possibility of resistance using their swift actions. Kristiansand and Bergen were captured on the first day.

Norwegian Army didn’t even have any anti-tank weapons. Most of the Norwegian soldiers were familiar with the tanks only by hearsay. Others knew nothing about them in general - village idiots!

Along narrow mountain roads, overcoming blockages and decrepit bridges, German tanks were moving forward. Every now and then they got stuck - carriers were unable to bring fuel in time. And heavy tanks required much fuel.

Nevertheless Horstmann couldn’t dote on the tank. What was talked about bridges? That it is insurmountable barrier for tanks?

It was found that they weren’t. Tanks managed to pass even on those bridges, which, according to official data, couldn’t hold more than five tons.

They overcame ground that was considered impassable either.

Sometimes, artillery didn’t manage to take the position in time. And NBFZ tanks brilliantly demonstrated their ability to replace the artillery. It made insinuations. Horstmann, however, didn’t concur with some militaries, who believed that artillery became obsolete with the appearance of tanks. But sometimes he thought, “Modern war can manage without guns but not without tanks”. 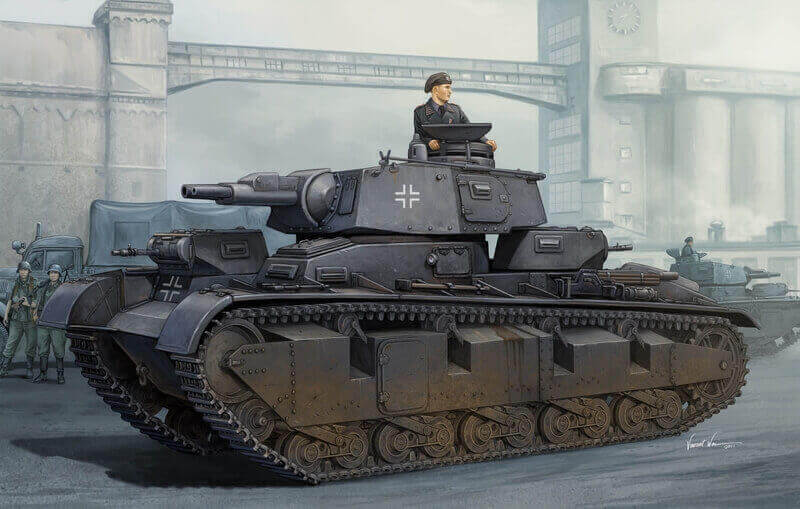 But the most important was a destructive effect. It inspired.

There were, of course, some disadvantages. Installed on the tanks arms didn’t have enough elevation to fight in the mountains. It was enough for the enemy to take a position high up on the hillside. But even there three-turret NBFZ showed a clear advantage.

There were only three tanks ... But Horstmann was determined to do wonders with these tanks.

But one man proposes and the other person got stuck with his tank in the swamp.

Through the noise came the voice:

- Immediately drag out the tank! Do you have any idea at least?..

He didn’t finish - something in the radio began to gnash and then line went dead.

Meanwhile Lieutenant Neuhauser was in despair. NBFZ stuck in a swampy hollow. The crew left the vehicle through available hatches. They started to fall tree, put them under tracks.

Tank roared, wept, but didn’t budge. Little by little he lifted his nose up - stern was going down into the swamp, sinking deeper and deeper.

- What are you talking about? - Neuhauser gloomily looked at dying tank. And it as though answered with a stupid, uncomprehending look of a dying giant.

- Secret development! It shouldn’t go to the enemy!

The commander pulled out a dirty handkerchief, wiped his face. Acrid sweat was burning his eyes.

And at that moment Neuhauser was so terrible, that no one of the crew didn’t even venture to oppose him even with a single look.

An explosion shacked the outskirts. There was enough fuel and tank got blazed.

Neuhauser looked at the burning vehicle and tears rolled down his face...

Captain Horstmann returned from Africa to his home town not for long. The whole Germany is now subordinated to the rhythm of the single major war.

Two survivor NBFZ tanks returned to the homeland long ago. Horstmann didn’t know where they were then. Three-turret tanks were no longer available. Manufacturers returned to one-turret design.

Nevertheless those three monsters shocked the world, thought Horstmann. They wouldn’t be forgotten. Whatever anybody may say, but with these twenty-three-ton huge things German tankers showed in the Norwegian mountains almost incredible results.

Horstmann walked with a rapid step along dark streets. In his pocket lay a new assignment. He was sent to the Eastern Front – to the USSR...