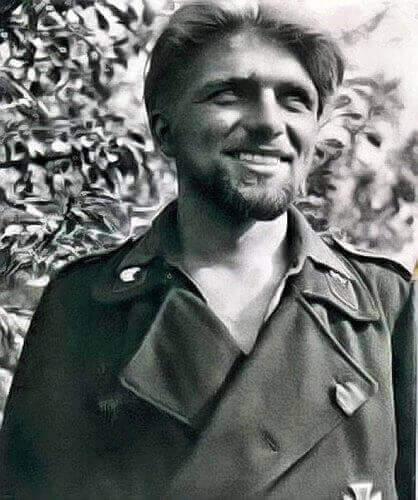 Alfred Rubbel took this picture of Kurt Knispel sometime during the war. He was to become the person who would later bury Kurt when Kurt passed away after succumbing to his injuries.

Kurt Knispel was a German tank commander credited with the destruction of 168 enemy tanks – a feat which cemented his status in history as the highest scoring tank ace of World War II.

Background Information
Knispel was born on 20th September 1921 in the former Sudetenland, Czechoslovakia, in a small settlement called Salisfeld (Salisov)near the town of Zuckmantel. His childhood was relatively carefree and he spent most of his early years in nearby Niklasdorf. He grew up to be a lad of medium build with broad shoulders and had a penchant for long hair, something which he would later be chided for in his military life. Shortly after completing an apprenticeship in an automobile factory in 1940, he applied to join the armoured forces of the German Army and was accepted immediately due to his physique and training.

Military Training
For his basic training, Knispel was stationed at the Panzer Replacement Training Battalion at Sagan in Lower Silesia where he had to learn to march and salute before progressing to basic weapons training just like all other soldiers. He learnt how to handle the Kar 98k rifle and P 38 pistol, throw hand grenades and operate the MG 34, and later trained to operate the Pz I, II & IV.

On 1st October 1940, he was transferred to the 3rd Company of the 29th Panzer Regiment, the 12th Panzer Division where his training as a loader and gunner in a Pz IV lasted until 11th June 1941.

World War II
At the time of Barbarossa, Knispel was a gunner in Pz IV under Lt. Hellman, where he participated in the initial assault as part of Panzergruppe 3, LVII Army Corps (later LVII Panzer Corps) commanded by General Adolf Kuntzen. He saw action from Yarzevo to the gates of Stalingrad, in the North around the Leningrad-Tikhvin area and also in the Caucasus under Mackensen.

By the time Knispel returned to Putlos at the end of January 1943, he grew familiar with the new Tiger tanks, and was credited with 12 kills at that point in time.

A group of soldiers led by Oberfeldwebel Fedensack and which included Kurt Knispel was sent to 500th Panzer Battalion at Paderborn from Putlos. It was the 1st Company of the elite 503rd Heavy Panzer Battalion and fought at Kursk as flank cover to 7th PzDiv (Armee Abteilung Kempf). Knispel participated further during the relief attack on the Cherkassy Pocket (a.k.a. Khorsun Pocket), Vinnitsa, Jampol, Kamenets-Podolsk. The Company was re-equipped with Tiger IIs and fought around Caen before retreating from Normandy.

Legacy
Although Knispel was credited with destroying 168 enemy tanks, an achievement which proclaimed him as the world’s top “tank killer”, he was never awarded the das Ritterkreutz (Knight’s Cross), Germany’s highest honor even though he was recommended for it four times. He did, however receive the German Cross in Gold, and became the only non-commissioned officer to receive the honour of being mentioned in the Wehrmacht communique in WWII. Perhaps his several conflicts with higher Nazi authorities attributed to his slow promotion, as one incident saw Knispel beating up an Einsatzgruppen officer who was assaulting the Soviet POWs. Military police were sent to look for him in his unit but Knispel had given orders to shoot anyone attempting to enter other than his own troops. This, together with his blatant disregard for military rules - sporting a goatee and keeping hair longer than regulations allowed for probably prevented him from receiving the honours he so rightly deserved. Another speculation as to why he never received the Knight’s Cross was that he never performed any outstanding acts of bravery but merely just destroyed enemy tanks.

Judging from photos and personal accounts of veterans, they knew Knispel as one who was not obsessed with the pursuit of glory and was always willing to take a step back to credit success to someone else whenever conflicting claims over destroyed enemy tanks arose.

Death
Sadly, Kurt Knispel did not manage to live to see peaceful times. He was mortally wounded in a military conflict near Strondorf in northern Austria and succumbed to his injuries. Ten days before the war ended in Europe, he died in a field hospital in Vrbovec, Czechoslovakia on April 28th 1945. He was only 23 years, 7 months and 8 days old at the time of his death.

If you have anything interesting to contribute or wish to see something featured, drop us a note in the forums!