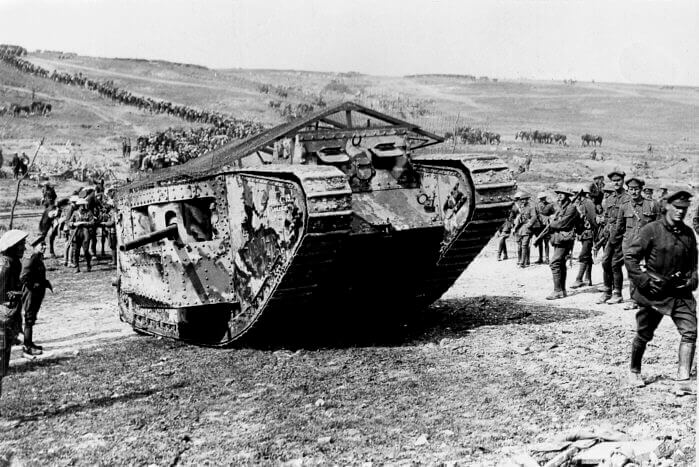 Prime-Minister Asquith was pensively tapping his fingers on the papers carefully collected into a folder.

«This Captain Hanky’s ability to catch on the raw is to be noted» — he said to himself.

The Memorandum, comprised by the Assistant Secretary of the Defence Committee Maurice Hankey looked solid and, compared with other pipe dreams of military officials had a priceless and so very British feature: good sense.

It was mainly about machine-guns.

Machine-guns were one of many Britain’s contribution to world’s progress. In 1898, Lord Kitchener, now the almighty Minister of War, annihilated the Mahdists army. It was in the battle at the Nile’s headwaters that England first used machine-guns. The fanatics rushed forward and died of English bullets.

God save the King and England! But this very weapon can be turned against British forces! What if English soldiers would have to charge under enemy’s machine-gun fire?

Intriguing. And, one may assume, clever. Worth to be shown to First Lord of the Admiralty.

Asquith called the secretary and ordered to contact Churchill

«Tell the Lord of the Admiralty it is urgent» — he added. 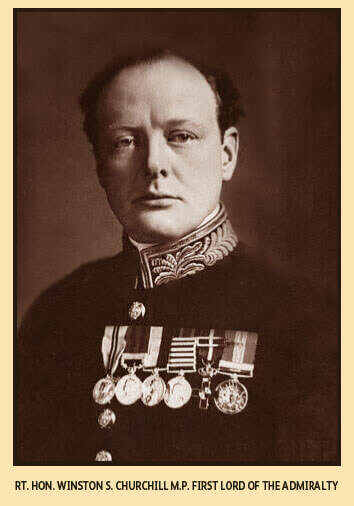 Churchill whistled for his dog and the little jolly pug jumped into his arms.

«There is no greater solace I can find than in doglike devotion». — explained Lord of the Admiralty  — «And I’m bloody tired… For this reason, please, sir, could you spare me of papers with too many words».

«Witty as always, sir», — replied the Prime Minister. — «I’ve brought you papers indeed, but I may tell you just as well that the matter concerns armoured machine-gun carriers».

«Oh!» — said Churchill.- «Curious. Yes, sir, it is definitely up my street. At the moment I am looking into armoured cars in question. Our airfields at Dunkirk — I mean naval air-bases — are in need of good protection».

«Wheel transport is always bound to roads», — answered the Prime Minister. — «Unfortunately, it leads to inevitable restrictions. But Hanky speaks about fully-tracked vehicles…»

« I've been working on the problem of equipment for armoured bridge-builders», — said Churchill. The dog on his knees yawned.  — «It is necessary to give them the ability to work through trenches and destroyed parts of roads».

«I am informed of your initiative», — made Asquith. He pulled a handkerchief out of the pocket and blotted his forehead.

The air in the cabinet was cool but Asquith was sweating. Things of too great importance were at stake. It was simply unbelievable how Churchill could keep his perfect calm. A pretender for sure. But a very able one.

«Yes, I offered to construct a special transportation vehicle with a steam engine on Holt's track system. What suits American farmers will be good for English soldiers too. But our “tractor” is harnessed with armour and machine-guns».

«You've got the support of the Chief of Fortifications», — noted the Prime-Minister. — «How did you manage to do it?»

«Let's say, I reasoned him», — answered Churchill with a narrow smile.

First Lord of the Admiralty crumpled up the newspaper, threw it away and ferociously bit his cigar.

What luck that nobody saw him at that moment.

«What's next? Dig in even deeper? No, there must be some breakthrough, some principal innovation!»

Churchill kept silent wearing an impenetrable expression on his face.

Ideas of genius visit several people at the same time. This is Providence. And Providence knows its onions and, ironic as it may sound, doesn't leave good ideas to chance. If one creator leaves the game another one will take his place. And he, Winston Churchill, will make sure the idea becomes a reality. That’s that!

He sighed and let himself a narrow smile.

«Bygones are bygones and we should think of the future!» — interrupted Sir John French.

— There was a time when we felt sorry about the poor dervishes that ran into our machine-guns unarmed. What if somebody feel the same for us?

«English soldiers will no longer be defenceless», — retorted Field Marhsal French coldly. — «We shall take care of it. And by the way this lieutenant colonel’s suggestion must be classified the highest». 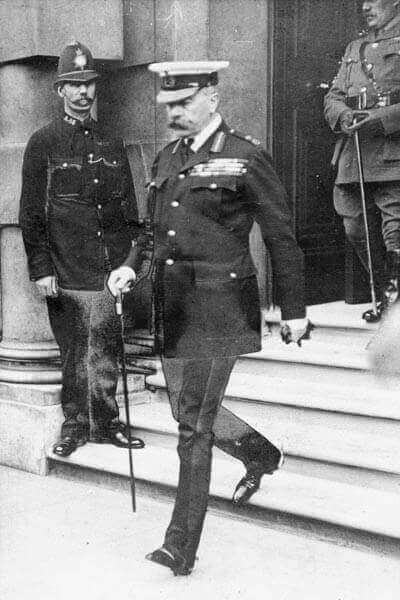 He lowered his eyes to see the sheet of paper before him on the table.

«These vehicles must be built in secret, on the native land, their existence is not to be discovered before everything is ready. There will be no preliminary tests with several vehicles at the same time because these will result in blowing the cover».

One of the Ministry officials asked a question that was on the tips on many tongues:

— What is the cardinal novelty of this new vehicle? This year in February we already undertook the experiment of running the barriers with heavily harnessed “Holt” tractors.

Churchill stared into the window. “What suits American farmers will be good for English soldiers”. It didn't work. So it's better stay forgotten.

But the tactless official went on:

— A complete failure of these tests brought us to complete abandoning the idea of building these “Land Ships” as they were called. «It is out of the question» was the verdict I recall. And still we recommence the previous affair?

— Because if we do not take any measures against razor-wire and machine-guns, we will stay in trenches until we rot.

Looking into the Lord of the Admiralty's grim face nobody in that room could even dare to think that Winston Churchill himself wasn't going to stay rot anywhere.

Royal Navy lieutenant Wilson looked with elation at his “tank”. This was the name that, for conspiracy's sake, was decided to give to the machine. Germans would never find out what reservoirs, cisterns or barrels were meant.

Minister of War Lord Kitchener sceptically raised his brows. His famous moustache bristled. All this demonstrations of the new vehicle was a complete waste of time to him.

— I refuse to believe that a war can be won with machines that are so vulnerable for hostile artillery! — he pronounced.

Strong wind was flattering his white scarf. How great it would be to have a smoke, but it was impossible to light a match in such weather.

Lieutenant colonel, however, was full of enthusiasm.

«We have here a life-sized model of the machine. We call it “Mother”. Please note its interesting diamond-shaped form and tracks going around the hull. We performed proof-shootings for this armour plates in January using German machine-guns».

«And how does “that” move?» — muttered Kitchener through his teeth.

Expression on Swinton's face showed that he didn't understand at first the meaning of this sarcastic “she”.

«For driving tests we prepared a ground and built obstacles identical to German defence lines. Our military officers assess this vehicle highly».

One of the lieutenants who was immediately fixed by eyes of every top-ranking guest blushed a little.

«I also believe necessary», — continued Swinton, — «To use these machines in large quantities. The initial success of the tank attack will be mainly in its novelty. This is why each tank should not be immediately entered into service as it becomes ready. On the contrary! The fact of their existence itself must be kept secret. But when everything is set for a major operation, all units together with infantry will act. This is how we shall break the frontline».

Swinton knew too well that before dealing with Germans he would have to break another frontline — Minister of War's disbelief. But eventually Kitchener spat out:

«And what do you suppose to be the maximum daily coverage for these vehicles?»

«Approximately twelve miles per day. Our objective will be capturing enemy’s artillery. I assume artillery to be the most dangerous adversary of this new weapon».

Lord Kitchener watched as the heavy diamond-shaped vehicle lumbered the testing ground crawling across trenches and tearing wire lines. Still it was clear that the Minister of War was only partially convinced in the invention’s usefulness.

«We shall place the initial order for, say, forty tanks», — he threw at last.

Compromise is a typically British way. Let it be.

Swinton, now a full colonel, walked past the line of his subordinates.

Many officers he knew in the face. Here was major Wilson former lieutenant of the Royal Navy, but at that moment fully engaged in tanks development.

And there stood another perspective commander, major Stern in the recent past a lieutenant of the Royal Naval Volunteer Reserve.

Most of these officers and ordinaries were trained to use machine-guns which was essential.

From one hundred and fifty tanks (the very energetic Swinton managed to increase the order) a half was armed with two cannons and three machine-guns. Others were equipped only with machine-guns.

Soldiers’ wit already called these tanks “male” and “female”. A “male” with its guns does more difficult work against enemy machine-gun emplacements while a “better half” had in some way easier job against enemy’s personnel assets.

From now the face of war changed forever.