World of Tank’s second weekly tournament in SEA has just been concluded over the weekend and many great battles were played out during the event. Teams did what they do best and fought and clawed their way to the top. Although there were many amazing teams, in the end there can only be one.

Team Grumpy Old Men bashed their way through the competition to emerge as the winners of our second weekly tournament! (Grumpy indeed) Congratulations to the team and Team M-D-K and AAD Team Bravo who came in 2nd and 3rd place respectively.

We caught up with one of the grumpy old men Grivyn, to field a few questions and find out more about the team members. Read on to find out more!

1.) How did you find you way to the World Of Tanks? And how long have you been playing it?
I've been playing Online mmo games since about late 1999 and read about WoT on a gaming site which I cant remember now. Having also a large interest in WWII I naturally grabbed the client loaded in and jumped into a LTracktor and promptly set about committing all the clichéd mistakes every new player made prior to the tutorial being put in.

2.) How did your team gather? And who are its members?
The team is made up of Panzac members, Trozoz, Dodgy_bob, Belrick, Noppers, Blade12444, Awarua, HERMITech, Jamo128 . We originally formed up back on the NA server to take part in the Ante Meridiem Challenges Lord Farquard was kind enough to put together for the Oceanic player base there. We had a bit of success there in taking out 2 of the tournaments but also had a few lessons in bad tank choices as well.

3.) How much do you practice together and what is the secret of your training?
We don't really practice that much as I find platooning in general matches works best for your teamwork, but I do utilize training rooms to check routes of attack, spotting distances for the various tanks and so forth. But as far as training matches go I prefer not to do them and keep everything fresh for the guys.

4.) What is your favourite vehicle in the game and why?
Favorite is hard to pick, it used to be the E100 but that required too much investment in gold rounds to be enjoyable so I would have to give the nod to the T110E5. As it stands currently armour has been outpaced by the newer guns so DPM is king. I know driving this tank most of the time I'm going to pen anything I come across. Along with its decent mobility and decent HP pool means you can play quite aggressively and brute force yourself out of trouble.

5.) Were there any difficulties your team was facing during battles? Who were your most severe opponents?
I was trying a new tank lineup and new strategies this time and was quite pleased with how this went. Our hardest opponents were our fellow Clanmates in Dropbears who took a game off us and MDK who we faced in the final and had completely outplayed us in the semi for Rumble 1.

6.) How are you going to spend the gold which you won? Any special tanks that you want to buy?
Most likely go into a month’s premium and gold ammo/consumables for Ural Steel Qualifiers. Currently there are no premium tanks I want that I don't already have, but that may change when the Dickermax is released.

7.) Are you participating in the Ural Steel qualifications? Do you have the same team for it or you have gathered a new one?
Yes we are. The team remains the same but 1 member had to drop out.

8.) What can you wish to your opponents in the World of Tanks?
For them to come second.

9.) What is your formula of success in game ?
Being able to rely on the team members to instinctively know what to do, so that when an order is given you don't have to micro manage it and in most cases they have already started doing what was required before the order is given.

10.) Share with us your best moments of the game - the one you liked best (maybe a battle that you will remember forever.)
That would have to be a game I had on Province in a Maus, in which I took something like 60ish hits ended up with a top gun, steel wall, scout and survived the battle on 100 odd HP. I still keep a copy of WoT7.2 around just to watch it now and then.

(We did a little more digging into Grivyn's  profile and guess what we found?) 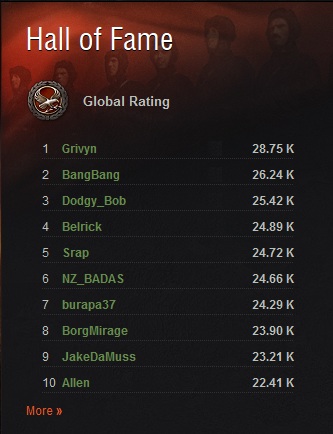 How did you managed to get to the first place in global rating?

That I have no idea about. It was as much a surprise to me as everyone else. Not sure what's used to calculate it but on the NA server, I was around 170ish but that was with a 240-280 ping which is half that now.