In-game Events Discuss on Forum
In other languages:

The Tank of the Month Special will let you enjoy some benefits for a selected tank of the month so keep a look out for your favourite ones every month! Check out what we have in store for you below for the month of February 2013.

Tank of the Month Special (February 2013)

The M4 Sherman was named after Union General William Tecumseh Sherman, following the British practice of naming their American-built tanks after famous American Civil War generals. The tank was born from an evolution of the Grant and Lee medium tanks and was primarily used by the United States during World War II. It retained much of the previous mechanical design but the first American main 75 mm gun mounted was added on a fully traversing turret with a gyrostabilizer to enable the crew to fire with reasonable accuracy while the tank was on the move. The designers designed the iconic tank as a replacement for the M3 Lee medium tank and focused on a goal of creating a dependable tank - easy to produce and maintain with standardization of parts and ammunition in a limited number of variants and of a moderate size and weight to promote maneuverability when crossing bridges, roads and transportation systems. These factors made the Sherman superior in some regards to the earlier German light and medium tanks of 1939-41 and production of the tank was favoured by the commander of the Armored Ground Forces over the heavier M26 Pershing.

The Sherman ended up being produced in large numbers and formed the backbone of most Allied offensives, starting in late 1942. Over 50,000 units of the tank were produced and seven variations created - the M4, M4A1, M4A2, M4A3, M4A4, M4A5 and M4A6. The variations were references to changes in engine type, production location or fuel type rather than representations of linear improvements in the vehicle.

The Shermans first saw action with the British Army at the Second Battle of El Alamein in October 1942 and continued its service well into the 1970s, operating with many of the world's militaries. 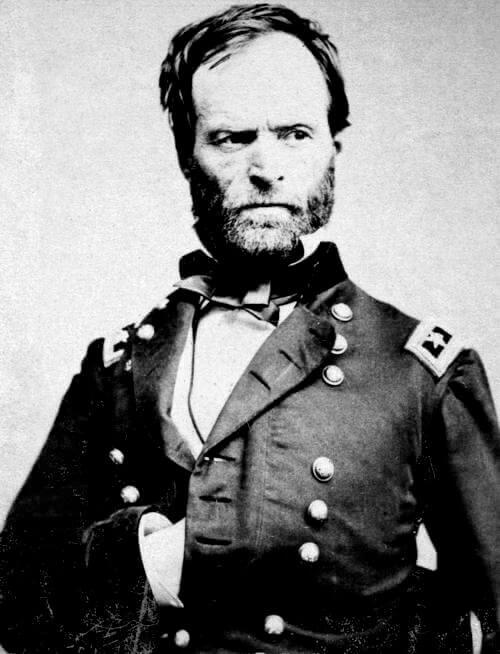 William Tecumseh Sherman was born on the 8th of February 1820 at Lancaster, Ohio. During  his younger years, he attended military school and was an excellent student. After graduating near the head of his class, he served a short stint in the military before he left to take on other fields of work. Hailing from a rich and influential family, he was never short of jobs or work. He ran a bank but when it failed, he tried his hand at law practice and went into other ventures such as teaching and land speculation but without much success before he eventually went back to serve in the military.

He was described as a short but energetic person who sported a close cropped head of fire red hair and wore his clothes unkempt, rarely shaved and tended to give his superior officers backtalk that bordered on treason. He served as a General in the Union Army during the American Civil War (1861–65), for which he received recognition for his outstanding command of military strategy as well as criticism for the harshness of the "scorched earth" policies that he implemented in conducting total war against the Confederate States. The English military historian B. H. Liddell Hart famously declared that Sherman was "the first modern general".