In-game Events
In other languages:

The Battle of Flers-Courcelette was the first known tank battle in history. Although there were a few problems that plagued the first tanks during the battle, they were quickly recognised as a major asset in the front lines and the next step in military technology.

In conjunction with the 97th anniversary of the battle, here's your chance to relive the historical event with generous discounts for the British Tech Tree!

The Battle of Flers-Courcelette Special

Enjoy 35% discounts on the following tanks:

25% discounts on the following tanks:

20% discounts on the following premium tank:


History Flashback: The Battle of Flers-Courcelette

The battles fought in World War One were some of the bloodiest in human history. This was mostly due to the strategy employed by all armies at the time; rows upon rows of deep trenches populated by soldiers on two sides of an empty battlefield, waiting for their opponents to charge right into their line of fire.

It was no surprise then that nobody ever bothered to leave their trenches at all. This eventually created a stalemate where soldiers would lie in wait for weeks or even months at a time. Men were still dying, but not from gunshots – they were killed by the unsanitary conditions and malnutrition instead.

Back in Britain, the British Landships Committee (which included future British Prime Minister Winston Churchill) were finalizing the designs for a new secret weapon. Its development was known only by a small group of people, but it soon had a name: the ‘tank’. 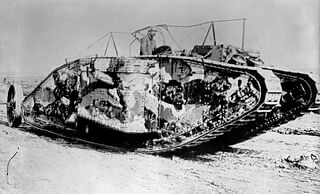 The first prototype was originally called the ‘Mark I’. It had only been tested for less than six months when the decision was made to put the tank into live-fire conditions for the very first time. The stage for its debut? The opening day of the Somme Offensive, which was to be the last and biggest campaign in World War One.

The engineers in charge of the Mark I were unhappy about the decision. There were still too many problems; it was slow, the crew found it difficult to spot their targets while piloting the vehicle, and the engines tended to fail without warning. It was also easily destroyed by a well-aimed cannon shell. The tank, they said, was simply not ready for war.

Despite the engineers' objections, the Mark I was still ordered to the frontlines.The first day of the Somme Offensive was long over by then, so they were sent to assist the army gathered outside the towns of Flers and Courcelette. On 11th September 1916, 49 tanks – the entire British armoured inventory at the time – began their slow journey towards their starting points for the coming battle. Their objective was to force an opening in the German defensive line surrounding the towns, which was protected by uneven terrain and a trench manned by German infantry. 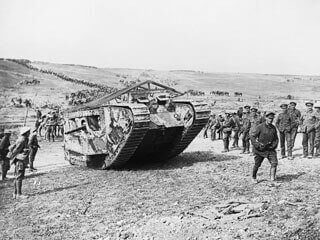 Of the 49 tanks sent, only 22 of them managed to form up at their intended position without any problems. A further 7 tanks failed to start in the beginning of the battle, leaving a total of 15 tanks ready for battle.

The Mark I proved to be useful in the days that followed. The 15 tanks both inspired and terrified soldiers on both sides, protecting their allies with their thick armour while bombarding the enemy with their guns. The British and French forces captured more ground than any other battle in the war, but despite the presence of the Mark I tanks, the German defence proved too difficult to defeat entirely.

Despite the failure in achieving its objective, the very first deployment of tanks in the battlefield convinced British commanders – and soon the world as well – that their newest weapon would become the future of warfare.