You may recall Steve Zaloga mentioning that in Gen Bruce Clarke's memoirs, Clarke described Gen Patton as "knowing less about tanks than any general officer he ever knew." If you missed it, Bob will take you there.

Well, in my bouncing around the National Archives, I ran across a report submitted by a rather frustrated Ordnance officer who had gone to visit Patton in France to meet a request that Patton had made for more machinegun firepower. To my lasting regret, I didn't have time to scan it all, but the gist of it was that this officer had brought with him a new, high-rate-of fire .30 calibre machinegun which, in the view of Ordnance Branch, would adequately meet the request for more dakka.

He didn't specify the exact machinegun he had brough along, though one must consider the likelihood of it being a derivative of the AN/M2 or T33, the "Stinger". He did however, make it clear that he thought he had wasted his trip. He went on to explain (All the below directly quoted):

General Patton's original request was for dual co-axial machine guns. When he first examined the modifications, he was disappointed, since he expected a new gun mount or turret. Upon this officer's explanation that the modification submitted could be furnished from available stocks in a very short time, and that the high cyclic rate guns actually afforded a greater increase in firepower than by the addition of one more co-axial gun; and that the time required to design and produce a new turret, or at least a new combination gun mount would be excessive and could not be readily installed in the field, he stated that the modification were "an excellent idea"

General Patton stated that "the German tanks are superior to ours in silhouette and in armament" and recommended careful study of all their details. The General further stated that in his opinion "a rotating turret was unnecessary and that our tanks were unnecessarily complicated and expensive"

The General stated that "the Ordnance Department should start designing tanks for the next war, which will come much sooner than most people realise"

Major General Grow, commanding general of the 10th Armored Division was not in favour of high cyclic rate machine guns and did not want any modifications made except to provide more powerful cannon. He stated that "there is nothing the matter with the present machine guns, if the modifications are adopted, we'll take them, try them out, and discard them if we don't like them" 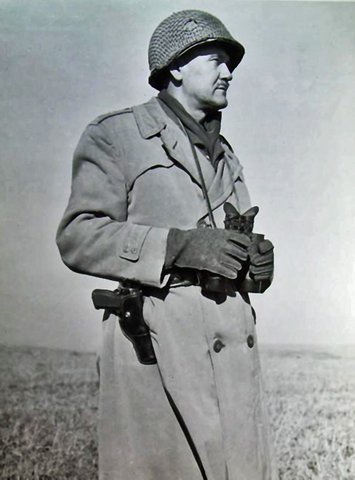 A number of officers of his command agreed with this decision. General Patton did not.

The Chief of Staff, 3rd Army, Brigadier General Gay, stated "we don't want any high cyclic rate machine guns - they use up ammunition too damn fast" 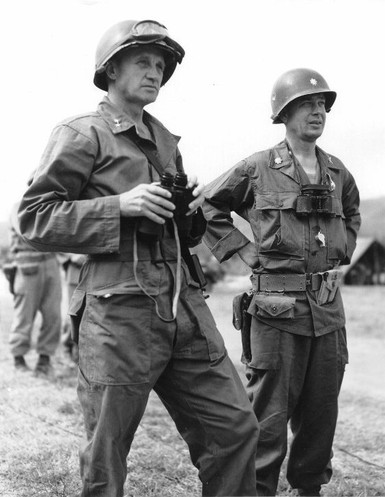 General Gay, as photographed in the Korean War

General Dager stated that any new design of turret should have the AA gun mounted centrally and forward of the hatches that the gun may be fired by either the loader or the tank commander. He stated that little use could be made of the Calibre .50 AA machine gun, as mounted now, since the loader is ordinarily a very busy man and usually rides with his hatch cover closed, while it is nearly impossible for the tank commander to fire the gun effectively without exposing a great portion of his body.

On 19 January 1945 Colonel Nixon and this officer reported to General Patton the recommendations of the 4th and 10th Armored Division commanders. Colonel Nixon recommended to General Patton that the modifications not be adopted because of the confusion which he said would result from having two types of Calibre .30 machine guns in service, requiring spare parts for the new weapons, as well as the time required to get the new weapons in the tanks from the UNITED STATES. Colonel Nixon added that since the Army Air Forces had priority on the new Calibre .50 anti-aircraft barrels, it would undoubtedly be a long time before any appreciable number could be furnished to the Army Ground Forces for tank use. Colonel Nixon recommended that no change be made in tank armament until General Patton's original request could be fulfilled by new designs.

Comment on the value of the bow gun was as varied as the number of officers expressing an opinion. General patton said it was a "damn nuisance". Many officers expressed a desire for a gun which would fire to the front, 45 degrees to either flank, and which would have a reflecting or optical sight.

If this is indeed typical of the sorts of opinion that Patton had, it seems likely that Gen Clarke's opinion is valid. In addition to having contrary opinions to those of his officers, he seems to both demonstrate a lack of understanding of the capabilities of Ordnance Branch ("Ah, sure, just design a new turret for me"), or a simple disregard of Ordnance Branch's efforts. "Gee, we in Ordnance never thought about examining the enemy's equipment. Thank you for suggesting it to us, General Patton..."

For his encore, Bob will also take you to....