The World of Tanks portal has just installed a brand-new addition called the Player Comparison feature. Simply put, this feature serves as a way for players to compare their profile statistics with any other player's, in a format that's easily understandable.

To help familiarize yourselves with this new feature, we'll be telling you all about it in this article. So read on!

The Player Comparison feature is integrated directly into the Player Profiles page. Previously, players can only view an individual's entire range of statistics, such as the Personal Rating, win rate percentage or kill/death ratio in isolation. This meant that most players had to resort to other methods outside of the portal to measure their performance against their peers.

Now, you will be able to pull the data from different players and examine them side-by-side on a seperate page.

How does it work?

To begin, search the name of the player you would like more information on at the Community > Players page (click here for direct link). Once you find the correct entry, click on the name to display the player's profile page. 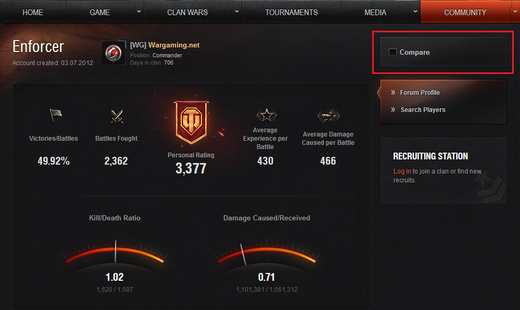 The page itself will remain mostly unchanged, except for a small addition on the top-right corner. As you can see from the screenshot above, there is a checkbox marked 'Compare'.

To extract the data from this player's profile, simply click on the checkbox and a list will appear to the side. This list will contain every player's profile where you have clicked the 'Compare' button, and it will hold up to 10 profiles at one time. 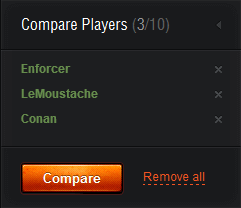 Once you are satisfied with the number of profiles that you have gathered, click on the 'Compare' button on the list. 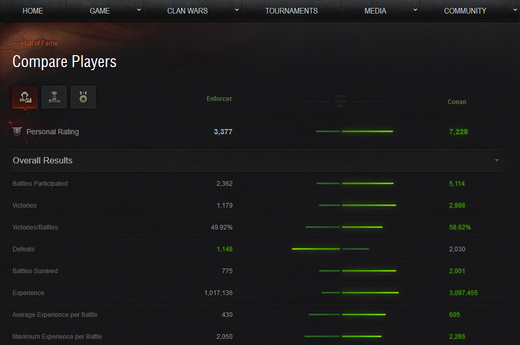 A new page will now load, showing you a comparison of statistics between the selected players. Almost everything can be compared here, from Personal Ratings to achievements gathered.

The differences are also represented in a horizontal line - the player with better performance in a selected category will feature a longer line weighed towards them. In contrast, the other player will have a much smaller line to illustrate the difference.

However, do take note: the green bar illustrations will only appear when two players are being compared, and will not be shown when three or more players are visible due to space constraints.

We hope this new feature will allow players to better measure their performance and aid them in improving their skills in battle. Good luck!